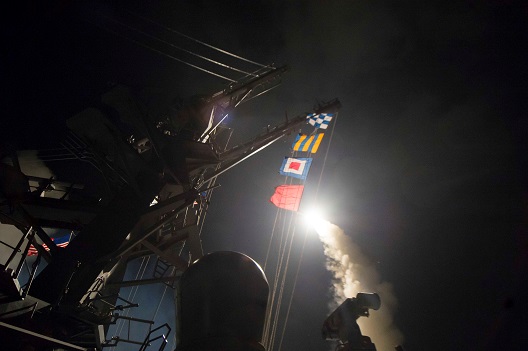 The American strike on Shayrat air base in Syria is an appropriate response to mass homicide by the regime of Bashar al-Assad. It was from Shayrat that aircrafts were launched on April 4, 2017 to deliver chemical munitions on the town of Khan Sheikhoun, killing several dozen defenseless civilians, including children. This American strike, which reportedly employed sea-launched cruise missiles to destroy aircraft and military facilities, will either be a one-time, one-off, fire-and-forget retaliation for a heinous chemical weapons assault on civilians, or it will serve as a signal to the Assad regime and its allies that the free ride for mass murder in Syria is now over.

The distinction between one-off retaliation and complicating mass homicide in a sustained manner is critical. In 2013 Bashar al-Assad was obliged to set aside (temporarily) the use of chemical weapons as a result of an American-Russian agreement. Assad’s response was to double-down on aerial and artillery atrocities, using everything at his disposal except chemicals. The results of his unopposed, Russian and Iranian abetted crime spree have been staggering: the biggest humanitarian abomination since World War II; the accelerated rise of other forms of violent extremism in Syria (most notably the Islamic State (ISIS, ISISL, or Daesh) and al-Qaeda), a migration crisis sweeping through Syria’s neighbors to Western Europe, and the loss of American credibility with friend and foe alike. And then, sufficiently emboldened by Western inaction, Assad returned to chemicals: chlorine at first, and then something far more deadly.

Assad struck with chemicals because his sense of impunity had, over years of Western apathy and inaction, become absolute. Perhaps he wished to demonstrate to his opponents that further resistance was useless; that the world would do nothing in response. Clearly he miscalculated. Yet now he may think he has the same option he took in September 2013: set the chemicals to the side and return to barrel bombs, gravity bombs, artillery shells, missiles, and mortar rounds against civilians in their homes, hospitals, marketplaces, and schools. If this is what he does and if he does it unopposed the military strikes of April 6, 2017 will go down in history as a useless, empty gesture.

The priority of the Trump administration in Syria remains the defeat of ISIS, al-Qaeda, and other forms of violent extremism. Statements by senior administration officials seem to indicate recognition that the Assad regime is one variant of the phenomenon to be neutralized. There is no administration interest in violent regime change, invasion, or occupation. There may and should be interest in getting Assad out of the mass homicide business altogether. With Assad enjoying, until April 6, 2017, a free ride to mass murder, ISIS and al-Qaeda reaped a recruiting bonanza. And peace talks in Geneva went nowhere. Indeed, one of Assad’s goals in the chemical attack may have been to neutralize Russian pressure on him to engage with the opposition in Geneva. One thing is clear: with civilians on the Assad bullseye, there can be no sustainable peace talks or political compromise in Geneva or anywhere.

If the battle against violent extremism is serious, the United States should be prepared to obstruct, complicate, and frustrate Assad’s free ride for mass homicide. Ideally Russia will cooperate in getting its client out of this bloody business. Whether it does or not, however, the Trump administration must act on what it already knows: that Bashar al-Assad’s political survival strategy of collective punishment and mass homicide is a gift that keeps on giving to ISIS, al-Qaeda, and other forms of violent, terrorist extremism.

If the strikes of April 6, 2017 end the Assad crime wave against Syrian civilians, good. If they do not, further action will be essential. “Never Again” must not become “Well, maybe just this once.” Civilian protection aside, resisting mass murder in Syria—irrespective of the murder weapon—is an essential tool in countering and defeating violent extremism.