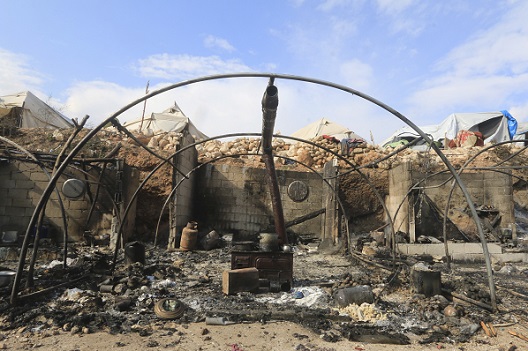 The horrific Islamic State (ISIL, ISIS, Daesh) suicide bombing near the Sayyida Zaynab mosque outside of Damascus is “caliph” Abu Bakr al-Baghdadi’s calling card—his way of reminding people that the peace talks being organized in Geneva represent only one facet of the struggle for Syria. As Washington tries, in the face of long odds, to orchestrate a political transition that would sideline Bashar al-Assad for the sake of anti-ISIL Syrian national unity, Syria’s other criminal kingpin—Baghdadi—weighs-in on his own inimical “don’t forget about me” manner. The Sayyida Zaynab atrocity is also a reminder of how woefully inadequate the international response to ISIL’s despicable presence in eastern Syria has been.

The roster of inadequacy is a long one, and it begins with the Assad regime, Russia, and Iran. As noted often in these pages, the very premise on which the Vienna diplomatic process is based—that ISIL in Syria is something which Washington, Tehran, and Moscow can agree is the common enemy—is demonstrably false. Relatively little of Russia’s four month air campaign in Syria has been vectored on ISIL targets. Instead, its overwhelming emphasis has been on neutralizing nationalist opponents of its client, Bashar al-Assad. Few (if any) of the militia assets brought to bear in support of Assad by Iran’s Revolutionary Guards have fought ISIL. They too have concentrated their fire on the regime’s real enemies. Tehran and Moscow come to the fight from differing motivational bases, but they agree on one thing: forcing the West into a binary choice between Baghdadi and the Barrel Bomber is the best way to preserve the latter. If Secretary of State John Kerry can sweet-talk his Russian and Iranian counterparts into abandoning this strategy, more power to him.

Indeed, that which passes for a US anti-ISIL strategy barely meets the standard of non-fiction. It begins with the questionable premise that the only kind of ground combat force that can kill ISIL in Syria and keep it dead would be indigenous in nature. It recognizes that what is available right now as a ground combat component—a Syrian Kurdish militia whose own priority is one of establishing Kurdish autonomy in the north of Syria—cannot do the job. And it proselytizes Tehran and Moscow with the message that only an Assad-free western Syria can bring army and rebels together for the liberation of the east: a message that might resonate if only Assad’s supporters accepted the view that ISIL’s destruction merits dropping Assad.

In gauging the feasibility of the Obama administration’s approach to ISIL in Syria, the following comment from a January 29, 2016 Department of Defense press briefing is worth considering. The briefer was the very capable Colonel Steve Warren. He was asked about the status of the effort against ISIL in its Syrian headquarters, Raqqa and the absence in Syria of a serious ground force combat component.

It is certainly feasible that Raqqa can be pressured or – or – or even assaulted in the next year. It’s also feasible that it will take more than one year. So we – you know, the enemy does get a vote. And we have to see how rapidly we can develop some of these partner forces, some of these moderate Syrian opposition forces that are in Syria.

Obviously, we don’t have the types of relationships there in Syria as we do here in Iraq. You know, in Iraq, we have a standing army with an established chain of command with training programs, et cetera. So we’re able to, you know, apply pressure a little bit more rapidly. In Syria, it’s not quite as solid.

Colonel Warren’s comments reflected a degree of administration comfort that seems remarkable. On November 13, 2015 ISIL in Raqqa orchestrated a series of massacres in Paris. One wonders what it would take to inspire an approach to the military destruction of this organization in Syria more energetic than a chipping-away process that might take another year to complete. Indeed, for Syria to have national elections in mid-2017 as hoped for by the American-inspired International Syria Support Group, ISIL would have to be cleared from the country well in advance: ideally before 2016 is half through.

Developing anti-ISIL “partner forces” from the “moderate Syrian opposition” will be impossible so long as that opposition is under relentless Russian, Iranian, and regime military assault. As important as defeating ISIL seems to be as measured by verbiage employed in the Obama administration from the president on-down, it is evidently not important enough to help the Syrian “partner force” recruiting base defend itself from Russian air attacks. Again—John Kerry will do his best to talk Russia and Iran into changing their national interest calculations in Syria. He may succeed. But one should not count on it. Moscow and Tehran seem to know what they want and what they are doing.

If Washington will not defend its “partner forces” recruiting base, perhaps it will consider the obvious alternative: raising an anti-ISIL professional ground force on a coalition-of-the-willing basis from states in the region and Western Europe. At the moment the administration is willing to remain inert on the basis of navel-gazing analysis holding that no one—not Turkey, not Jordan, not France, not any of the Gulf States—will ever contribute forces to such an undertaking, even if it entails permitting the Syrian opposition to establish a recognized alternate Syrian government in liberated Raqqa. The administration may well be cowed by the sheer weight of the diplomatic lift required to build the requisite coalition. It may not know how to undertake such an endeavor. It would, after all, be something transcending talking points, something requiring friendly persuasion and the delegation of authority to others.

As matters now stand White House officials probably think that if they issued a coalition of the willing invitation no one would come. One wonders, however, if administration attitude would change if partners in the region and in Europe were to take the initiative in raising the subject. Yes, they would want to see American leadership and American skin—some level of ground combat participation—in the game. Yes, they would have to factor-in Russian, Iranian, and Assad regime objections to the decisive defeat of ISIL in Syria—the neutralization of what they consider to be the best and perhaps only argument in favor of Bashar al-Assad staying in power somewhere. And yes, they would have to consider the possibility of Washington simply going limp in response, thereby confirming their worst fears of American disengagement during the closing days of the Obama administration.

Critics of Turkey, Saudi Arabia, and Qatar claim that they helped give rise to ISIL in Syria and are content to see it keep breathing as a counterweight to the Assad regime (and, in the case of Turkey, to Kurds), even though the regime and its enablers count on the caliph staying in business until nationalist rebels are disposed of. Indeed, if these three see value in ISIL’s survival in Syria they will neither initiate ground force discussions nor respond positively to an American diplomatic initiative. Waiting for such an initiative may be a long wait indeed. If Ankara, Riyadh and Doha are—as critics allege—content to see ISIL in Syria thrive indefinitely, perhaps they need only wait for the Obama administration to table the ground combat force coalition-of-the-willing issue.

Image: (Photos: Reuters. Damaged tents are pictured at a camp for internally displaced people after it was hit by what residents said was shelling carried out by government allied forces, near the Syrian-Turkish border in Jabal al-Turkman, Latakia province January 31, 2016. Picture taken January 31, 2016. REUTERS/Ammar Abdullah)