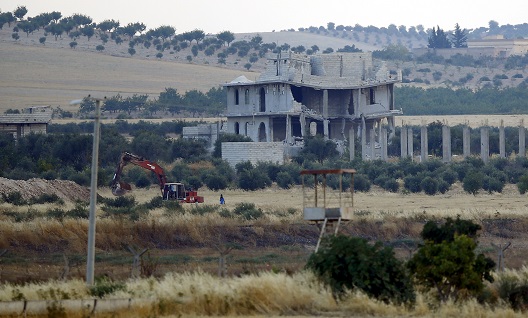 The recent battles in the northern Aleppo between Syrian Arab rebels and the Islamic State (ISIS) around al-Rai underline the of importance the region and the difficulty of resolving the Arab-Kurdish rivalry. The growth of this sub-conflict could threaten any chances for long term stability in northern Syria.

In 2012, as Syria was split between opposition and regime forces, the Syrian Kurdish Democratic Union (PYD) saw an opportunity to pursue its ambitions for autonomy.  While rebel forces battled Assad, the PYD and its armed wing, the People’s Protection Unit (YPG), focused on uniting their three northern territories: Afrin, Kobani, and al-Jazira.

Syrian Arabs accuse the PYD of threatening the integrity of Syrian territory by creating their own federation. On March 17, the PYD and allied political groups in northern Syria voted to declare a federal democratic system in the area that Kurdish forces control in northern Syria. The Federal Democratic System of Rojava encompasses the three Kurdish cantons and areas in the northern Aleppo province captured by Kurdish forces, including Tel Abyad. In a recent interview with al-Monitor, Abdul Karim Omar, a foreign relations official in al-Jazira region, tried assuaging Arab fears by stating that the cities of Shyouk, al-Shaddadi, and Tel Abyad, which are part of the federal system, would have their own administrative systems. However, Arab rebel factions have labeled the new federal system as a terrorist-backed conspiracy that threatens Syria’s integrity.

Officials in the newly declared autonomous region are now trying to secure international recognition for their territory. In February 2016, they opened a representation office in Moscow, in April they opened one in Sweden, and they intend to open offices in other countries as well. To opposition parties, which struggle to assert themselves internationally, the Rojava government opening these offices is not only a vie for independence from Syria but puts Arab opposition groups and Kurds in direct competition in terms of international support. The two factions are already competing over territory.

Taking advantage of the relative lull in violence with the Syrian regime created by the ceasefire, in early April Syrian rebels launched an attack on al-Rai. News of a possible PYD offensive this month on the Islamic State (ISIS) city of Manbij west of the Euphrates provoked the ire of rebels. “The FSA [Free Syrian Army], such as  al-Jabha al-Shamiya and the Manbij Military Council have consolidated about 2000 fighters and are attempting to reclaim territory from ISIS to circumvent the PYD advance in the area of al-Rai,“ says Rashed Satouf, a member of the National Movement (Tayar Mouwatana) and a fighter from Raqqa. The alliance of rebel groups, which includes Sultan Murad Brigade, which enjoys Turkish and US backing, and Failaq al-Sham, seized at least 16 villages from ISIS, some which ISIS later wrestled back.

Besides aiming to push back Kurdish expansion in northern Syria, the operation was an attempt by rebel factions to show the local and international communities that they are a credible fighting force against ISIS. Up until now, the most successful fighting force against ISIS has been the YPG, which later joined the Syrian Democratic Forces (SDF) and constitutes the majority of its fighters, because the rebel forces have prioritized fighting the regime.

The YPG’s effectiveness against ISIS has earned them the support of the US Department of Defense (DoD), including training, supplies, and air strikes. For the United States, working with the Kurdish forces has been an effective strategy for driving ISIS out of northern Syria, as the Kurds have proven to be reliable partners. However, this strategy has limited effectiveness given that the Kurds are unwilling to expand beyond their natural territory, comprised of the three Kurdish cantons, and are reluctant to push into predominantly Arab areas, such as the ISIS capital of Raqqa. If rebel forces can show that they constitute an effective force against ISIS, they may be able to gain more international support.

This state of affairs has translated on the ground into clashes between the groups including in the Aleppo neighborhood of Sheikh Maqsud and Azaz in northern Aleppo countryside, according to Lieutenant Hassan Hamadeh from the FSA.

In February, the clashes culminated in battles between DoD-backed SDF forces and CIA-supported rebel groups. With the weakening of Arab rebel forces pummeled by Russian airstrikes in the Aleppo region, the YPG dominated SDF forces saw an opportunity to expand its territory with the intention of connecting it with Afrin, its western canton. Battles ensued in the city Azaz, which constitutes an important transit point for military ammunition and supply between Syria and Turkey for Arab rebels and is a political center for local governance bodies based in northern Aleppo.

Azaz and the nearby region of al-Rai bears strategic importance not only for Syrian rebels but also for their Turkish backers. Ankara will not allow Kurds to consolidate territory along Turkey’s southern border because it fears the Kurdistan Workers Party (PKK), which the US and Turkey consider a terrorist group and is linked with the PYD in Syria, will use it launch attacks in Turkey. The Turkish army has repeatedly shelled Kurdish positions near the town of Azaz, when Kurdish forces try to advance against Jarablus, and during the YPG’s advance on the Menagh military air base last February. Turkey has leveraged its backing of rebel groups to shore up its southern border against the Syrian Kurdish forces’ expansion, but continuing to do so could exacerbate the situation rather than stabilize it.

Such intertwining rivalries could translate in increased warring in the northern regions. Rebel sources have already reported increased tensions within the SDF itself, between its Kurdish and Arab components, which could escalate in direct clashes between the members in the future. The tempo of direct confrontation between Kurds and Arab may slow down as the ceasefire erodes and violence returns to pre-ceasefire conditions. As Arab factions find themselves fighting on three fronts against ISIS, the Syrian regime, and the Kurds, they will struggle to hold their ground, much less go on the offensive against Kurdish forces.

International powers, in particular the United States, have treated the rising Arab-Kurdish tensions as a side show, but what is clear from recent events is that finding common ground between the PYD’s vision for an autonomous region, the nationalist vision of Syria, and Turkey’s security concerns is becoming more complex and less likely. Even the Syrian regime, which has maintained tenuous relations with the Kurds, stated that the declaration of a federal system was “without any legal value and void of any legal, political, social or economic effect.” As relations continue to deteriorate, unifying Syria will become more complex, and unifying Syrians against ISIS a more challenging scenario.

Image: Photo: A masked man stands next to an excavator as it digs trenches in the Islamic State-held Syrian town of Jarablus, as they are pictured from the Turkish border town of Karkamis, in Gaziantep province, Turkey August 1, 2015. Karkamis is a Turkish town of 10,500 people, that sits directly opposite the border post. Shut for more than a year, the military sealed the crossing with a breeze block wall a few months ago. Behind it, just inside Syria, the black flag of Islamic State flaps in the breeze. Karkamis lies on the northeastern edge of a rectangle of Syrian territory some 80 km (50 miles) long, controlled by the radical Islamists. The United States and Turkey hope that by sweeping Islamic State from this border zone, they can deprive it of a smuggling route which has seen its ranks swollen with foreign fighters and its coffers boosted by illicit trade. Picture taken August 1, 2015. REUTERS/Murad Sezer