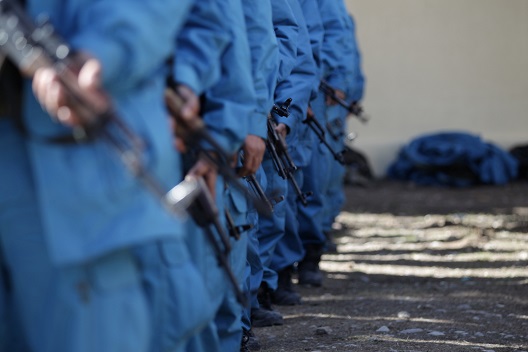 Turkey has come a long way in repairing and rebuilding infrastructure in areas formerly controlled by Syrian armed opposition groups. This is in part because of Turkey’s Euphrates Shield operation, which launched to support and protect its southern border from the Islamic State (ISIS, ISIL, Daesh) and block Kurds from unifying their territories in northern Syria.

This area acts as a makeshift safe zone with Turkey returning Syrian refugees to this area; a fact Russia has not publicized. The zone extends between the cities of Azaz and Jarablus in the northern outskirts of Aleppo governorate, a territory that is 110 kilometers wide and sixty-five kilometers long. In fact, a few days ago, Turkish authorities announced that its Euphrates Shield operation had come to an end after achieving all of its objectives.

No international entity announced the end of airstrikes, and there is no indication from the Syrian regime or Russia to refrain from targeting opposition forces and the civilian population in this area. In spite of this, thousands of Syrian families have begun heading to the area after the Turkish government guaranteed the provision of essential services, particularly in the cities of al-Bab and Jarablus.

This return of internally displaced persons (IDP)s is facilitated in part by the national hospital opening in Jarablus, repair of water and electricity networks, schools reopening, a police unit in the city, and the continued nearby presence of Turkish military forces.

According to numbers provided by the mayor of Gaziantep, Fatma Şahin, approximately thirty thousand Syrians returned from Turkey to areas recently safeguarded from ISIS in the eastern Aleppo countryside.

After years of public demands and protest, Syrians hope that these cities are safe to return to now. However, some doubt the extent of protection in the area from feuding groups, particularly given the state of continued hostility between Turkey and the Kurdish People’s Protection Units (YPG) forces. Moreover, the Syrian regime has drawn close to areas of fighting as relations between Turkey and Russia continue to fluctuate.

Perhaps what has increased these fears recently is the unwillingness of the new US administration to take practical steps towards creating safe zones in spite of President Donald Trump’s promises to the contrary and his frequent assertion that the US is cooperating with Turkey on the issue.

The reason for the cooling of US-Turkish relations could be this delay in the United States following through on its promises, although Turkey still considers securing these areas a priority.

The United States recently increased its military presence in Syria and deployed US fighters in the city of Manbij east of Aleppo, which is controlled by the YPG, seen as a terrorist organization according to Turkey.

In spite of the lack of progress and support by these armed groups for the Syrian opposition in the fight against ISIS, activist and journalist Mazen Darwish believes that the presence of these forces, alongside their Turkish counterparts, will have a positive effect on the stability of the area and protect it from being targeted. The armed groups can also defuse military tension between the three groups: Kurds, opposition, and the Syrian regime.

Darwish came to this conclusion based on what happened recently in the town of Tadef, near al-Bab east of Aleppo, where regional units forced the regime to withdraw from the town without incident after it clashed with opposition forces there.

Furthermore, Darwish believes that Turkey was recently able to impose a safe zone for displaced Syrians recognized by major regional forces, namely the United States and Russia, after it successfully advanced against ISIS. This will significantly help reduce the suffering of Syrians who wish to stay in their country and find stability.

Towards the end of his comments, Darwish acknowledged that steps taken by Turkey to train and recruit Syrian groups to administer the safe zone and remove all military headquarters from select residential areas will play a major role in restoring stability and returning a sizeable portion of Syrians from Turkey back to the area.

Officially, the Syrian Interim Government seeks to move its headquarters to Jarablus as a prelude to setting up operations for the first time in Syria from previously working out of Turkey.

A few days ago, president of the Syrian Interim Government, Jawad Abu Hatab, said that the area that liberated by the Euphrates Shield operation “will increase by five thousand to six thousand square kilometers.” He said that this will ensure the safe zone as a primary point for liberating the remaining areas, and ultimately allowing it to absorb nearly two million Syrians with universities and housing units available for them.

According to Khaled Qassas, a newly displaced Syrian in Jarablus, the best way to protect a safe zone is to defend it, bring in humanitarian organizations, and secure job opportunities for those within it. The young man, who currently works for the Turkey-trained free police, explains that the main reason for his return to the area was for work, which helped sustain him and his family given the high cost of living in neighboring countries.

In this context, Yousef Tahhan, former military leader of Fateh al-Sham a moderate Syrian armed opposition group, believes that any announcement of a safe zone requires international approval as well as ground forces to prevent it from being targeted. The leadership of the Free Syrian Army (FSA) confirms no agreement so far about safe zones, particularly given the clashes in villages near the area and the presence of ISIS-supported cells .

Al-Saleh, a military commander, says that there are currently no indications of the possibility of sending foreign troops to northern Syria as a prelude to expanding the safe zone. He added that these kinds of international efforts failed in both Iraq and the Kosovo region of the Balkans in the past in the absence of monitoring and protective forces.

The commander questioned why the US and Russia have refused for six years to set up a buffer zone for protecting civilians in Syria rather than letting them flow by the millions into Europe.

It is expected that the battle for Raqqa, showing signs of getting underway, will increase the flow of IDPs by the thousands into Turkey’s border areas. Some believe that areas controlled by the moderate opposition will be the main destination for the people of Raqqa given the fragility of the situation with Kurdish forces.

It is worth mentioning that this safe zone recently accommodated displaced Syrians not only from the north of the country, but also from Damascus, Homs, and the central areas. If the conflict and fighting is successfully neutralized, some expect there to be a major drop in the number of Syrian refugees headed to Europe, Lebanon, or Turkey.

Six years since the beginning of the conflict in Syria, and after the deaths of thousands of innocent civilians, many Syrians see the establishment of safe zones as one of the simplest requests made by those fleeing the war that the international community failed to grant. Creating them now is better than continuing to neglect them.

Image: Photo: Members of the Free police attend a ceremony celebrating the inauguration of the "Free Police" in the Syrian border town of Jarablus January 24, 2017. REUTERS/Khalil Ashawi