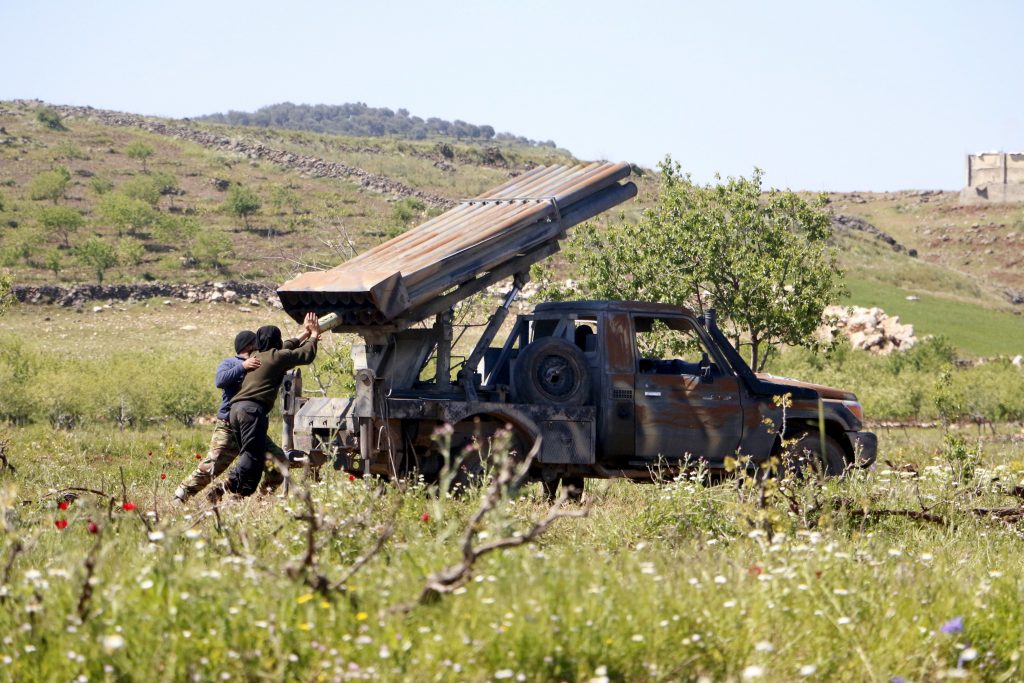 In an audio recording, Hay’at Tahrir al-Sham’s cleric, Abu al-Yaqzan al-Masri, also known as Mohammed Naji, a former member of the Salafist al-Nour Party in Egypt according to Arabi 21, issued a fatwa on the need to fight his former faction, Ahrar al-Sham. He further urged Hay’at Tahrir al-Sham (HTS) fighters to kill anyone who would take up arms against them, saying that “in order to stay here [in Idlib] we must remove Ahrar al-Sham.”

Following the recording, non-Syrian fighters strapped on suicide vests and headed to the Bab al-Hawa border crossing with Turkey, where Ahrar al-Sham leaders were holed up. Using heavy weapons, including tanks, artillery, and machine guns, they entered the city of Sarmada near the border crossing, where the clashes lasted about twelve hours and ended with HTS taking control of the city, before the convoy headed straight towards the Bab al-Hawa crossing, where opposing forces clashed for seventy-two hours. The battle ended in a siege of the entrenched leaders, who were then forced to negotiate the crossing’s handover to a civilian body according to a statement issued by news agencies and Ahrar al-Sham. This civilian body will be Julani’s watchdog over the goods passing through the crossing.

The fighting between Ahrar and HTS lasted until the end of July. According to Arabi 21, casualties of the clashes reached sixty-five, including fifteen civilians who were injured near the crossing, where there are a number of camps sheltering thousands of internally displaced people (IDP). The clashes broke out after the revolutionary flag was flown by members of Ahrar al-Sham in the town of Hazarin in Jabal al-Zawiyya, where its main force is stationed. Al-Julani then called on those he trusted, all of whom have ties to al-Qaeda, such as Abu Abdullah Atoun, a native of the coastal town of Jableh and the leader of the Nusra Front’s army, sending them to vulnerable areas and centers of power in the mountains with the goal of occupying Ahrar al-Sham’s attention so that the rest of the attackers could take control of the crossing.

On the other hand, none of the attempts by Ali al-Umar (the general commander of Ahrar al-Sham, also known as Abu Ammar) and Hassan Soufan Abu al-Bara (Ahrar al-Sham’s Shura Council chief) to beg the remaining factions for help have succeeded. The other armed factions instead took a neutral stance, chief among them being Faylaq al-Sham, the military wing of the Syrian Muslim Brotherhood. Ahrar al-Sham has lost important areas that will be difficult to recover in the future should it decide to go to war once again. That much was confirmed by AbuAmmar, who warned that this is only one of many rounds to come. What happens in Idlib could open door to future fights, and signals al-Julani’s control over Idlib now that the entire region is marked by al-Qaeda despite the presence of other factions, some of which are still receiving support from the Friends of Syria including Qatar, Saudi Arabia, and Turkey. Some important areas in Idlib province under HTS control include the cities of Salqin, Harem, Kafr Takharim, Darkoush, Jisr al-Shughour, Ariha, Khan Sheikoun, al-Dana, Hazano, and Ma’aret Masreen.

Idlib province is falling under the control of both the Turkestan Party and the Nusra Front under the name of HTS. However, their names cover the the fact that the name of al-Qaeda has spread in these areas and even appears in graffiti on the walls. Although the Turkestan Party has claimed neutrality, foreign “jihadists” have taken part in the attack on Salqin, so much so that one of the attackers took over a building and killed two civilians before using their bodies as a trap for those trying to get close enough to pull them out. The Syrian factions among the ranks of HTS did not

succeed in stopping the Al-Qaeda attacks; instead, the opposition faction Nur al-Din al-Zenki, who claims to have 6000 fighters, broke away and headed to the western countryside of Aleppo. Zenki, in conjunction with the military arm of the Brotherhood, tried but failed to take a large contingent with them as they left.

The number of attacking fighters exceeded 2,500, whereas Ahrar al-Sham has more than 5,000 fighters in the aforementioned area, and more than 10,000 in the whole of Idlib according to the estimates of a source close to the group. These clashes have tested the strength of Abu Mohammed al-Julani, particularly as the latter previously won favor with the al-Qaeda, which accuses the rest of the Syrian factions of heresy, whereas today HTS is suffering from internal divisions due to al-Julani distancing himself from al-Qaeda’s thinking and its accusation that he is trying to rid non-Syrian fighters from the ranks of the new formation, Hay’at Tahrir al-Sham. Meanwhile, Ahrar al-Sham (the Syrian Salafist current) came out of all of this with a defeat that could be described as catastrophic, losing their largest source of funding, becoming a small force like the rest of the Syrian opposition, and enduring the defection of Liwa al-Badia, which joined HTS.

Imports at the border crossing with Turkey exceed $8 million according to private sources inside the crossing, and the civil administration that is expected to be sent there will be sponsored by al-Qaeda, providing it with an abundant source of cash. If trade with Turkey continues, al-Qaeda will be able to control most of Idlib’s financial resources, without imposing in-kind and financial taxes on the rest of the Syrian opposition’s formations.

There is a real fear among regime allies, especially the Shia, that Mosul will be repeated, and civilians will become helpless, subject to every whim of the Hesbah (morality) police in all areas mentioned. Only the city of Binnish, the al-Ghab plains, and parts of Jabal al-Zawiyya remain under Ahrar al-Sham control, none of which are of strategic value to al-Julani. Rather, Ahrar’s presence there serves him by offering a buffer with regime forces and allowing him to devote himself to fighting his opponents, with Turkey at the top of the list should it decide to enter Idlib.

Al-Julani won a major victory aided by al-Yaqzan’s fatwa, which spread throughout HTS like wildfire, as he was able to win over the Arab mujahideen and use them as his strike force in Idlib.

The coming days will test the extent of al-Julani’s success, because while it may have been a military victory, it came at a high political price. The city of Saraqeb, just outside Idlib, broke out in two days of mass demonstrations against HTS, resulting in casualties as HTS fighters responded by opening fire on demonstrators. Among the victims was activist Musab al-‘Ezzo who was shot in the chest and killed. After Zenki’s withdrawal and Ahrar al-Sham’s retreat, the extremist trend among HTS has emerged in full force, which may just lead to the international community targeting it the way it now targets the Islamic State.