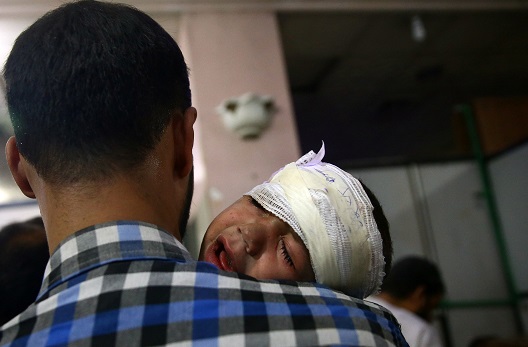 Photo: A man holds a wounded child after shelling on the rebel-held besieged town of Douma, in eastern Ghouta in Damascus, Syria September 26, 2017. REUTERS/Bassam Khabieh

The medical situation in Damascus’ Eastern Ghouta is deteriorating as the Syrian regime’s siege of the city surpasses four years, threatening an impending health crisis for civilians in need of treatment. These civilians reside just a few kilometers from the capital; however, they cannot go to the capital. The siege is happening under the watch of the international community, particularly the United Nations, raising questions about its ability to participate in rebuilding Syria in a way that protects civilians and restores stability in the region.

After the Syrian regime lost control of Ghouta in 2012 and the outbreak of several battles, the regime imposed a siege on the eastern side of Damascus and its surrounding areas, including Douma, Harasta, Zamalka, Arbin, Kafr Batna, Saqba, Hamouriyah, Jisreen, and other towns. After 2013, there were tunnels reaching Ghouta in the district of Barza al-Damashqi—lifelines to Eastern Ghouta. However, after the agreement to forcibly displace the people of Barza this year, the tunnels were closed along with the path to al-Wafideen refugee camp. Thus, Douma, Arbin, and other areas fell under a suffocating siege.

Because of these changes, the Syrian Government now completely controls the flow of aid to all areas of Eastern Ghouta, says Dr. Hamza, a resident of Ghouta. “Permitting the entry of materials is more political than practical—if the regime took into consideration international interests and was forced to allow the entrance of aid, it would. It seems like the Russians and the regime do not want to let aid through right now.”

The revolution against the Syrian regime began in 2011, when Dr. Hamza was a resident of Ghouta. He remained in the area during the conflict, co-founding many of the region’s hospitals and medical centers. Dr. Hamza currently works at Arbin Hospital and is well acquainted with the details of the medical conditions around the capital.

Because of the tight blockade, medical institutions and the Red Crescent have found a formula for dealing with the regime to secure approvals for serious medical evacuations, but the wait list is long and very few patients have been able to leave compared to the number still waiting.

According to Dr. Hamza, there are 369 cases on the evacuation list and 18 more are being reviewed, 124 of which need immediate evacuation for treatment outside Ghouta. An additional 188 cases are less serious and can go without treatment for some time.

The Syrian-American Medical Association (SAMS) prepared a brief report entitled “Under Siege: the Plight of Eastern Ghouta,” showing the impact of more than four years of siege on the city. In this report, doctors confirmed that many of the patients on the medical evacuation list are waiting for death in their homes.

The report showed that only 107 doctors, including one oncologist and one neurosurgeon, treat approximately 400,000 people from the Eastern Ghouta population. Beyond diagnosis, they have no ability to provide medical services because of the acute shortage of medicines, supplies, and surgical equipment, pointing to the spread of infectious diseases such as salmonella, measles and tuberculosis.

The report details the continuous difficulty in securing approval for critical medical evacuations. In August 2017, four children died in Eastern Ghouta waiting for the regime’s order to evacuate them. On 23 September of this year, five year old Osama died of an acute brain infection and was barred from traveling to Damascus—a mere 10 kilometers away—to obtain the life-saving antiviral drug Aciclovir, despite the fact that his name and 330 others at the time were known to health authorities associated with the United Nations in Damascus.

There are simple steps that the United Nations can take in the near future, the first of which is to expedite the evacuation of urgent cases, especially children and elderly patients who do not pose any threat, such as the one month old Siamese twins who died in Damascus after their evacuation in August of 2016. According to Dr. Mohamad Katoub, SAMS Advocacy Director, the regime prevented them from leaving Syria despite the presence of dozens of offers to treat them outside the country, postponing their evacuation until they eventually died. Some doctors estimated that the twins would live for another fifteen days. In an analysis for Foreign Affairs, Dr. Annie Sparrow of the Arnold Institute for World Health in New York concluded that the government of Bashar al-Assad refused to help and stopped all visits from the mother of the nursing twins. Five days later, they were declared dead at a little over a month, despite having had a large chance of survival.

A year later, coincidentally in the same month, Sarah, a young child, was in the same situation —barred from evacuating Ghouta and suffering from delayed treatment—resulting in the exacerbation of a tumor in the retina of her left eye.

Another step to reduce the severity of cases is to provide medicine to doctors in Ghouta. Despite the siege, doctors in Ghouta work under very difficult circumstances. However, the unlikelihood of success hampers their progress, as experienced by Dr. Hossam Adnan who wrote on his Facebook page, “Yesterday they brought me a one day old baby with a rare congenital condition called tracheoesophageal fistula, where the esophagus is closed at the middle and the lower section connected to the respiratory tract. Of course, the real challenge we face in these circumstances is that we are conducting rare surgery under siege conditions, with scarce medicine, and frankly a lack of expertise in this type of surgery, which requires a specialist in pediatric surgery, as well as a specialist hospital to follow up after surgery.”

Dr. Adnan confirmed that he and a group of experts decided to perform the operation with a specialist from outside Syria via internet and the operation was successful. However, a few days later the child died because of a lack of medication needed for follow-up treatment after surgery.

Thus, the Ghouta disaster affirms the “starve and surrender” tactic that the regime employs in many areas beyond its control, resulting in the forcible displacement of its populations. “The road is completely closed, and the Ghouta harvest is starting to end. Essentially, we have reverted to 2014 before Madaya, where in Ghouta there were cases of death because of malnutrition,” says Dr. Hamza, referring to the village of Madaya northwest of Damascus. Regime forces imposed a siege on Madaya in July 2015 which led to many cases of starvation, malnutrition, lack of medicine, and resulted in the forcible displacement of its people in an agreement to evacuate four cities in Syria. The agreement allowed for the transfer of 3,800 opposition fighters in Madaya and Zabadani to Idlib in exchange for the evacuation of Kafraya and Fuaa in rural Idlib to the areas of regime control last April.

Dr. Hamza added: “The siege has intensified and supplies are waning. In November we will see severe cases of malnutrition mostly. We may recall the memories of Madaya or the siege.”

If Syrians in Ghouta consider what is happening, they will realize the United Nations’ lack of action and complacency. They see no future for those who speak out, and do not benefit from the resistance to the regime, or gain support from the international community. Even if they surrender to the Assad regime, the population will still be displaced.

These situations raise important questions for the international community, especially when headed towards discussions of rebuilding Syria. Given what is happening in Ghouta, how can Bashar Assad and his regime be trusted? Is reconstruction possible as long as the regime clings to power? How can this reconstruction take place?