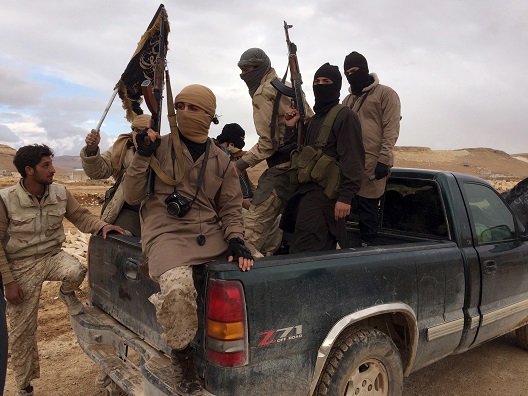 Photo: Al Qaeda-linked Nusra Front fighters carry their weapons on the back of a pick-up truck during the release of Lebanese soldiers and policemen in Arsal, eastern Bekaa Valley, Lebanon, December 1, 2015. REUTERS/Stringer

Battles between opposition groups in northern Syria have threatened the Syrian revolution and left Jabhat al-Nusra (now part of Hay’at Tahrir al-Sham) in control of Aleppo and Idlib; how did that happen?

When the Syrian revolution first turned into an armed struggle, the fight was carried out by armed groups operating under the flag of the Free Syrian Army (FSA). But that changed as a multitude of armed groups came onto the scene, including Islamist. A new phase of factionalism began as political rivalries emerged. Each group fought for control of territory and vied to govern liberated areas in order to stake its claim and make a name for itself. This fighting has ranged from minor clashes quickly resolved through traditional social channels or interventions by elders and religious figures, to targeted campaigns aimed at removing a particular armed group and seizing its territories, bases, arsenals, and ammunitions stores.

Jabhat al-Nusra, under its various names, began its attacks on FSA factions with an assault on the Syrian Revolutionaries’ Front in late 2014. It went on to destroy at least ten more factions, finally doing away with Ahrar Al-Sham in July this year. Nusra adopted several key strategies in its attacks against opposition groups:

First, Nusra’s successful use of strategic military operations against the regime garnered local support despite its ruthless tactics. Nusra knew Syrians were desperate for victories against regime forces and hoped the regime could be beaten militarily, or that their villages and towns could be liberated to pave the way for a return home. The public therefore often ignored Nusra’s negative aspects. The group used tactics such as car bombs against regime forces and proved its effectiveness by winning several battles when the regime’s lines of defense had strengthened and the Syrian opposition’s light and medium weaponry was no longer effective. The group also exploited the military expertise of foreign fighters in its ranks, who had taken part in hundreds of battles in other parts of the world, which earned the group the privilege of commanding battles. The Jaysh al-Fateh alliance, formed later, also won resounding victories against the regime. Nusra leader Abu Mohammad al-Jolani insisted his group should lead the coalition, giving the Syrian public the impression that its achievements belonged to Nusra, even though many other factions provided fighters, heavy equipment, and specific heavy ammunition that Nusra was lacking. This weaponry had as much of an impact on the outcome of the battles as the car bombs. Nusra followed each attack against a Syrian opposition faction with a military operation against regime forces to distract attention from its actions.

Second, Nusra’s military effectiveness and centralized system of command solidified its strong position. Jolani is more determined than other factions that his initiative survives. He is more aware, more effective and better able to exploit the situation for his own ends as well as quicker at taking hard decisions. He knew that his initiative could not carry on and be effective unless it was centralized, despite Nusra’s lack of cohesion and the struggles of various factions within it. He has however been able to standardize its official discourse and exert control, setting up the so-called Nusra Army as a centralized strike force made up of carefully selected, highly trained fighters who have proven their loyalty to Jolani.

Third, the success of the Jihadist discourse and how it helped Nusra attract elite fighters is key to its strategy. When it first formed, Nusra worked hard to recruit elite fighters from other factions, which has been successful. Some of its major military victories are due to it elite fighters. It has fed its fighters Salafist-Jihadist rhetoric through a network of Sharia bases which also promote this discourse in local Syrian society. This systemic and structured propaganda is so effective that a religious ruling by Nusra’s Sharia emir is accepted without question by these fighters, even if it calls for them to wage war on other factions.

Fourth, other factions’ lack of organization and rivalry between them contributed to Nusra’s success by positioning them as a functioning alternative. Jolani exploited the relatively weak organization of opposition factions and the rivalries between them, especially between factions that share joint control of certain areas. In such cases he has signed a deal with one faction to attack the other, or at least ensure that one faction stands aside while Jolani attacks its rival. Next, he attacks the faction that had remained neutral or whose help he sought, finally placing Nusra in sole control of the area. He has also made use of the presence of what he calls “corrupters” within the ranks of opposition factions. Some factions have individuals with bad reputations in their ranks, but have not been able to discipline them due to lack of internal organization. This causes bitterness in the surrounding society. Jolani has justified many of his attacks on opposition factions by saying they were carried out in order to detain “corrupters.”

Fifth, Nusra is very thorough and strategic in planning its attacks. Nusra’s attacks on other factions have not been in reaction to a specific event, but were rather based on months of detailed military planning, during which Nusra studied its victim’s leadership and made use of its own intelligence service to gather detailed information about the group’s bases, stores, supply lines and deployments as well as its level of popularity. Jabhat al-Nusra attempts to find any gap that may help it in its strategy. Many rebel factions have been unable to defend themselves from attacks by the group, which has a presence in most areas.

Sixth, the pragmatism and use of revolutionary messaging by Nusra keeps it relevant to the local population. When the Syrian public realized the danger posed by Jabhat al-Nusra and the fact it could bring an end to the revolution, Jolani broke ties with al-Qaeda and announced in a series of statements that he had no objection to integrating with other rebel factions in a single military and political entity, using revolutionary and nationalist phrases the group had not previously used or had banned on the grounds of apostasy.

Seventh, Nusra’s targeted and professional use of social media and creating an electronic army ensured its messaging spread as well as its military victories. Jabhat al-Nusra is well aware of the role social media has played in promoting the Syrian revolution to the masses. The group has used such platforms to promote jihadist ideology among the Syrian people as well as those from outside Syria who have taken an interest in the revolution. These tools have become a source of local news available to all. The collapse of communication networks means many would be unaware of what is happening in neighboring areas were it not for social media. Jabhat al-Nusra has an electronic army of Twitter and Facebook users able to transmit its messages, as well as publishing rumors, covering up real events and spreading news of Nusra’s victories along with cutting-edge multimedia content.

As for how Jabhat al-Nusra dealt with Ahrar al-Sham, Jolani used new tactics for getting rid of the rival movement. It worked hard to attract Ahrar’s first and second-tier leaders, exploiting the similarities between their ideologies and using a policy of keeping certain areas out of the battle. Jolani sent representatives to pressure the group into local ceasefire deals, selecting areas where Ahrar al-Sham has the upper hand in terms of numbers and control. After the battles, it reneges on these deals and takes control of areas Ahrar covered.

Jolani’s ruthless strategy has not only ensured Nusra’s domination of Idlib, but also that removing him would be no small task. Nusra has driven out the rest of the opposition and made itself the only alternative to the regime in these areas giving it a level of public support that ISIS in the East does not enjoy.