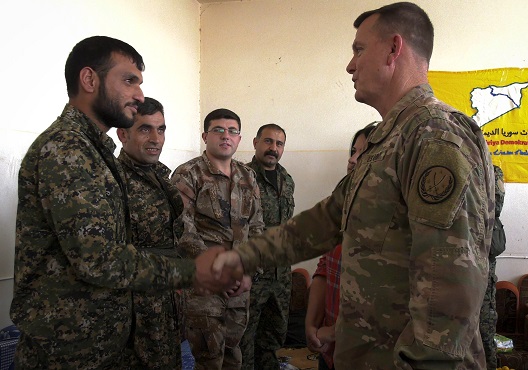 With reports that the Kurdish-led Syrian Democratic Council (SDC)—the political wing of the American-backed Syrian Democratic Forces (SDF)—is meeting with Syrian president Bashar al-Assad for diplomatic talks, the possibility of greater Kurdish representation, or even autonomy, in Syria has found an unlikely boost. Chances that the Kurds will achieve these goals seem slim, but both sides have allegedly agreed on establishing committees to supervise the implementation of public projects and services in Kurdish areas. While this may be perceived as a step towards Kurdish autonomy, the US State Department has claimed to be committed to the territorial integrity of Syria.

Although US President Donald Trump earlier this year voiced his desire to withdraw US troops from Syria, the Department of State and Department of Defense (DoD) seem committed to staying in order to carry out stabilization projects and prevent the resurgence of the Islamic State (ISIS) after its territorial defeat. With an assault on Idlib imminently projected, and the fleeing of more than 30,000 people in preparation of incoming Syrian troops and Russian aircraft, the Trump administration’s main objectives now are to hamper Iran in Syria and ensure that ISIS does not regroup.

Meeting the goal of ensuring that ISIS does not recoalesce into a capable force means that the deployment of American troops in Syria could be extended for years. It also means that the US forces in Syria, though ostensibly there only to fight ISIS, will have to deal with the awkward and complex political reality that Syria’s war has become; particularly Turkey’s hostility toward the Kurds and the Kurds’ intent to secure their political future—even by working with Syrian President Bashar al-Assad. Although the US Government supported the opposition against the Syrian regime, it was largely through the State Department, USAID, and CIA, whereas DoD has avoided Syria’s messy politics and focused exclusively on fighting ISIS—something it has never been able to completely do.

The SDF’s main bastion of power is northeastern Syria, where there are also roughly 2,000 American troops. American deployment there keeps out Turkish forces, who view Syrian Kurdish forces with the same distrust they view the Kurdistan Worker’s Party (PKK) in Turkey. The presence of American troops serves as a deterrence, forcing the Syrian regime to focus on regions without foreign troops, with the most recent example being Idlib.

As such, reported discussions between SDF and Assad could pave the road for an American exit from the region. If Assad builds on his promise of creating committees to implement services in Kurdish areas, meets the SDC’s demands to develop a road map leading to decentralized rule, and allow them an active role in drafting a new Syrian constitution; the need for American troops may be nullified if the Syrian regime and its backers can guarantee the Kurds protection from Turkey. Moreover, Assad is keen to have US forces depart, having threatened to use force to kick out US troops, and if the Kurds side with him it will be hard for the United States to justify staying. With Trump pulling stabilization funding for Syria, and if the SDF no longer need American troops by its side, the US may find itself in a position where it is no longer wanted in Kurdish areas and in Syria at large.

The growing alliance between the SDF and the Assad regime may also be further cemented due to alleged military cooperation in the fight for the city of Idlib. In the SDF’s quest for autonomy, the battle for Idlib presents an opportunity to retrench themselves in the region after Turkish-led forces defeated the SDF in the nearby Kurdish city of Afrin.

In potentially helping Assad regain Idlib, Kurdish leaders are hoping that Assad will, in turn, help them reclaim Afrin and “clear all parts of Syria from the ISIS, jihadis, and terrorist groups backed by Turkey,” as claimed by Aldar Khalili, a leader of the SDC.  To add to this burgeoning relationship, Kurdish troops feel betrayed by the United States for not answering their calls for help when Afrin was attacked by Turkish-led forces. An intelligence source has also claimed that US military leaders told the SDF that they would not accept SDF members fighting alongside Syrian regime forces in the battle for Idlib. Consequently, such reports have further strained SDF-American relations.

The regime-SDF relationship is clearly one of short-lived convenience and self-interest. While working with each other in Idlib presents an opportunity for both parties involved, their goals may also diverge in other areas of the country. On September 8, clashes broke out between Kurdish forces and Syrian troops in Qamishli that left at least eighteen people dead. These clashes are attributed to the creeping presence of regime troops into SDF controlled territory, as both sides continue to gauge the temperature of their unpredictable relationship in different areas of the country. Whereas Bashar al-Assad has continuously turned a blind eye to Kurdish-controlled towns up to this point of the conflict, the winding down of the war will continue to bring about more of these types of clashes as Assad fights for hegemony and Kurdish groups fight for autonomy.

In an effort to meet the goal of hampering Iran’s role, the Trump administration has sanctioned key businessmen associated with Assad, which has forced the SDF to sever their oil deals and trade ties with Damascus and in general hindered its attempts to create a long-term alliance with the Syrian regime. The US Treasury Department intensified its targeting of Iranian-backed Syrian businessmen, in coordination with the appointment of James Jeffrey as special envoy for Syrian diplomacy. The United States has strategically targeted Assad’s economic inner circle by cutting off middlemen who hold the keys to electricity production and distribution in Damascus. In this way, American sanctions have hampered Damascus and scared away other countries who wish to do business with the regime.

While the SDF and the Assad regime may be coordinating with one another in the upcoming Idlib battle, albeit for their own reasons, analysts indicate the United States now fears it has lost its influence in Syria, and the greater region, and is desperately attempting to regain its footing through sheer economic power. To stay in the game, the US administration needs to secure its position in northeast Syria—the only foothold still available. The best, and perhaps only, way to do this is to support the Kurdish-dominated SDF. This is a risky strategy given how it antagonizes Turkey, but perhaps the only one left.

Sam Fouad is a political consultant and global affairs analyst with a focus on the Middle East. Follow him at @_saf155.