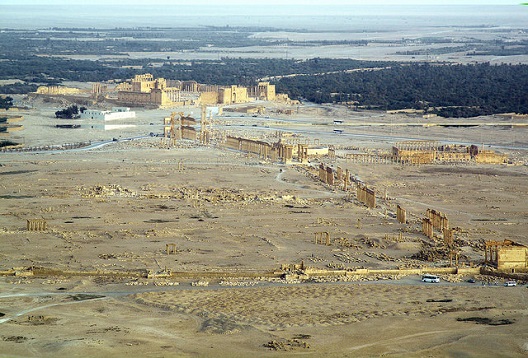 If the United States and its partners are serious about defeating the Islamic State (ISIS or ISIL) they must deny the terror group a major source of its funding: proceeds from the illegal antiquities trade.  Until now, the effort to halt the looting and resale of Iraq and Syria’s heritage has been piecemeal and peripheral to the overall “degrade and destroy” strategy; the effort to choke the multi-million dollar black market for antiquities should be seen as on par—and taken in tandem—with the effort to choke the black market for oil.

In late March, a Syrian rebel coalition captured the northern city of Idlib, compelling the regime to reposition troops from central Syria. ISIS seized the moment to launch a major offensive on the strategically located city of Palmyra, which serves as a gateway for Damascus and Homs to points further east. The ISIS victory, which underlined the regime’s decreasing ability to wage a multi-front war, was a major windfall for the terror group: ISIS captured oil fields, munition depots, phosphate mines, and, to the alarm of all, the ancient city of Palmyra—a UNESCO World Heritage site containing some of the most magnificent Hellenic ruins in the Eastern Mediterranean.

The threat to Palmyra’s heritage is not new—the site has been looted since the beginning of the war—but the city falling under ISIS control raises this threat considerably. A signature of ISIS’s violent expansion throughout Syria and Iraq has been the targeted destruction of certain sites of religious and cultural significance—a deliberate, systematic program of iconoclasm. To reinforce the group’s image as enforcers of a strict Sunni fundamentalism, ISIS produces glitzy propaganda videos of its henchmen destroying cultural artifacts deemed insufficiently Islamic. Ever attuned to media exposure, ISIS is keenly aware that Palmyra offers a prominent stage—quite literally, in fact, as the group has reportedly conducted executions in the ancient amphitheater.

As yet, the ruins remain mostly unharmed. But the local ISIS commander (purportedly a Saudi national) has pledged to pulverize the statues “that the miscreants used to pray for.” (When the early Muslim general Khalid ibn al-Walid captured Palmyra in 634 AD he left the same statues untouched, but apparently, ISIS is more rightly guided than the Prophet’s companion.)

ISIS’s pillaging of Syrian heritage is motivated not only by ideological purity, but also by profit. Western intelligence officials estimate that the antiquities trade is second only to oil. Antiquities have become so central to ISIS’s cash flow that in some areas the looting of cultural heritage forms a department within the ISIS bureaucracy.

From Syria, ISIS taps into a global market hungry for artifacts of the ancient Near East, whatever their provenance. The illicit goods typically cross into Lebanon and Turkey, where they are laundered and resold to brokers before their final point of sale to auction houses and private collectors in Europe, the United States, and the Gulf. For those who proffer the faint silver lining that the black market is at least removing priceless objects from harm’s way, Sam Hardy of Conflict Antiquities reminds us, “We must not be misled by antiquities collecting lobbyists’ insinuation that Syria or Iraq’s antiquities are better smuggled than burned by the various groups of militants—the smuggling pays for the burning.”

What can the United States and its partners do to halt this significant source of terror funding?

In short, the United States must choke the antiquities black market with the same zeal it has worked to choke the black market for oil. While the most visible aspect of the US-led Coalition to Counter ISIS has been the targeted bombing of ISIS refineries and depots, the effort to cripple the oil infrastructure involves a much broader approach. Speaking at the Carnegie Endowment for International Peace, David Cohen, the Department of Treasury Undersecretary for Terrorism and Financial Intelligence, outlined its many targets and his department’s aggressive moves against them:

The middlemen, traders, refiners, transport companies, and anyone else that handles ISIL’s oil should know that we are hard at work identifying them, and that we have tools at hand to stop them. We not only can cut them off from the US financial system and freeze their assets, but we can also make it very difficult for them to find a bank anywhere that will touch their money or process their transactions.

Cohen, recognizing the many moving parts in the operation, emphasized the necessary coordination between counterparts in the State Department, the Department of Defense, law enforcement, and the intelligence community. “This is a whole-of-government effort.”

Recently, Treasury announced the formation of the multi-national Counter-ISIL Finance Group (CIFG), which aims to track and disrupt the terror group’s economic sustainment. As the CIFG draws up its action plan, the United States should advocate for the centrality of addressing cultural property theft.

A new senior level official to run a task force representing the various agencies targeting the illicit antiquities trade would better coordinate the administration’s anti-trafficking efforts. This is not a new idea, and it has been floated before in various forms: leaders of the House Committee on Foreign Affairs propose in H.R. 1493 that this official be a State Department employee “at the Assistant Secretary level or above”; Deborah Lehr and Wendy Chamberlin have proposed the official sit at the National Security Council. The task force would develop an aggressive “whole-of-government” strategy for combatting antiquities trafficking. Currently, some agencies have a very passive approach (the State Department has focused mostly on “raising awareness”), while other agencies are woefully under-resourced (the FBI’s Art Crime Team, assembled after the 2004 looting of the Baghdad Museum, has only thirteen dedicated agents). The task force would look at pending US legislation and measures adopted by other countries, such as Germany’s strict guidelines for importing artifacts.

The administration could also step up coordination with its international partners. Building on efforts like Antiquities Coalition’s recent Cairo conference, the United States must work to strengthen the regional anti-trafficking network. Collaboration is key between transit countries such as Lebanon and Turkey, demand-side countries in the Gulf, and countries with extensive experience policing antiquities smuggling networks, such as Egypt. Supporting UNESCO’s program to train regional police and customs officials and attending summits such as last week’s meeting of anti-ISIS foreign ministers in Paris, the United States could advocate for antiquities to occupy a central part of the agenda. Working with regional governments, however, is not sufficient, especially in places like Syria where the government controls less than half the territory. Only collaboration with revenant non-state actors—including activists, opposition organizations, and certain armed groups—can stem the cash flow from illegal artifacts trade.

Under the Convention on Cultural Property Implementation Act (ratified in the 1970 UN convention on trafficking cultural property), the State Department can impose heightened restrictions on the import of archaeological material if the United States reaches an agreement with the source country. Because striking such an agreement with Assad’s government is politically unfeasible—not to mention Assad’s lack of control over sites like Palmyra—the United States should reach a substitute agreement with the Arab League (a creative solution proposed by Deborah Lehr).

Increased collaboration with international museum authorities would also ensure that illicit goods do not find a home in their display cases. Fueled by oil money and the desire to become the new capitals of Arab culture, Gulf states are hurriedly building major new museums—several of which still need collections to fill them. The United States ought to work with the relevant authorities to ensure that new museums do not inadvertently become exhibitions of an eviscerated Syria and Iraq.

Although ISIS provides the current catalyst for action, this epidemic of cultural theft will surely outlive any particular group. Given the instability in Syria and Iraq, artifacts will remain susceptible to ongoing, large-scale, systematic looting for years. But through a muscular anti-trafficking effort and linking the issue to core international efforts to stabilize Iraq and Syria, the United States can help mitigate the damage to our shared human history. If we are to promote a return to civility in the Near East, we must not be idle bystanders to a fire sale of Near Eastern civilization.

Matthew Hall is a Nonresident Fellow with the Atlantic Council’s Rafik Hariri Center for the Middle East.