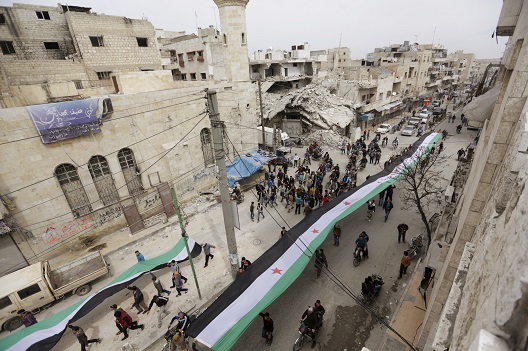 The convoys of rebels arriving one after the other in Idlib, such as those coming from Hay al-Waer in Homs and the Damascus suburb of Qaboun, will not be the last. The regime has succeeded in turning Idlib into a hope for the remaining Syrian opposition as they are driven out of other areas. Turkey has also closed its borders with the small province in northwest Syria. This has left thousands of jihadists inside the city in a prison-like siege, some of whom adapted to the atmosphere, searching for sources of stability. Some feel that this small plot of land has become their inevitable home that must be defended until the last drop of blood.

Bilal Abdul Kareem, a journalist close to the jihadists, publishes periodic reports explaining the situation of civilians, particularly when populous areas are being bombed by Russian aircrafts or their Syrian cousins. Meanwhile, French jihadists did not hesitate to build a village of their own in Idlib, which is now experiencing continuous growth due to the constant influx of jihadists. Everyone now realizes that Idlib is the last safe haven and an alternative home, or perhaps the final one, for jihadists. Similarly, jihadists from Turkestan went from searching for a haven where they could pitch their tents to building homes built for the long haul. As the hope of return has become a fantasy, the Chechens and Caucasians have gotten even closer to the people living in Idlib through an increasing number of intermarriages between Chechens and Syrians. While language and their non-Syrian origins may have been an obstacle, the religious connection and extended stay have been more important.

Idlib’s markets are in full swing these days with the arrival of Ramadan, a month where family ties between jihadists become more important and bring them together. But foreign jihadists can only ask their relatives living in Europe for a few dollars. Inside the city, the cafes are packed with dozens of jihadists, talking and wandering around in complete secrecy in fear of those who might report their presence to the West.  The US announcement offering a reward for the location of [Abu Muhammad] al-Julani, in addition to the film made by Al Aan TV correspondent Jenan Moussa showing that Idlib is a major jihadist stronghold, has only made it more difficult for jihadists to move about.

In fact, no one can deny the presence of jihadists in the city, but some in Idlib claim that there are no more than 8,000 fighters, which is quite a small number considering the current population of Idlib may be more than three million people who have come from various cities and  rural areas.

What makes Idlib a jihadist stronghold, is Hay’at Tahrir al-Sham (HTS), not those other jihadists that are suffering from poverty, homelessness, and misery, but who believe, that in the end, God will reward them for their pilgrimage to Syria. What underscores HTS’s involvement in dirtying Idlib’s reputation is their arrest of 55 foreign jihadists in a single month, and the testimony of a journalist who recently emerged from al-Uqab prison, one of Hay’at Tahrir al-Sham’s most notorious, stressing that the jihadists are not the ones in charge; on the contrary, they are in the same situation as the Syrians and the title of powerbroker among them belongs to HTS. The Chechens and Caucasians have also been implicated in fewer complaints in the courts, reflecting fighters’ ability to stay of trouble, and at times even their pacifism despite being classified as anti-Russian jihadists. Why their planes have been unable to target Chechen leaders is a question to which the Russians have yet to find an answer. But the answer is very simple according to the population of Idlib city: having popular support guarantees their protection. This is what has happened with jihadists, they have been living in safety ever since Idlib became a home to the remaining nationalities. There are now American, French, Belgian, Russian, British, German, Swedish, and Afghani nationalities in Idlib, in addition to every Arab nationality.

The city has become a collective home for all those who, despite a lack of trust in many cases, have no choice but to cooperate and come together. European fighters must work with Syrians. They are forced to trust them in order to receive money from their European relatives, otherwise they will be unable to manage their affairs, since they cannot farm and sell things in the market like Syrians. But the role of the jihadist is to go to the front and protect the city borders. It is a division of labor imposed on both sides by the circumstances of war. Recently, each side seems to have come to accept these roles.

No one can ignore the fact that these jihadists are present in Idlib, which has become their home in every sense of the word. These fighters know every entrance, exit, and weak point from which the regime can advance, and it is on that basis, that they are studying potential battles. They believe that it will not be long before the West’s planes, led by the United States, turn the situation on its head. Idlib is now witnessing a state of cautious stability where a fragile truce calls for “de-escalation” accompanied by limited warplane activity, but the regime can break it at any time it pleases. The regime is boasting of its achievements, and it will not be long before it looks towards Idlib after finishing up in Syria’s other regions, despite the truce.

Jihadists possess battle-hardened mentality, making them challenging opponents. If there were no aircraft alongside the militias fighting on the side of the regime, their control would stretch far beyond Idlib, but Turkey’s closed borders and the West’s efforts to isolate them and prevent them from getting weapons is limiting their ability and rendering them ineffective. They are now looking for new defensive means. The saying ‘necessity is the mother of invention’ applies in real terms to what is going on in the green city, but what most worries jihadists is the in-fighting between the largest factions of the opposition. It wastes valuable time that could be better spent searching for a defensive strategy, as they had done previously when they captured the city in 2015 and advanced on the western coast. At this point, they have little more than religious belief to support them in the face of any oncoming attack.