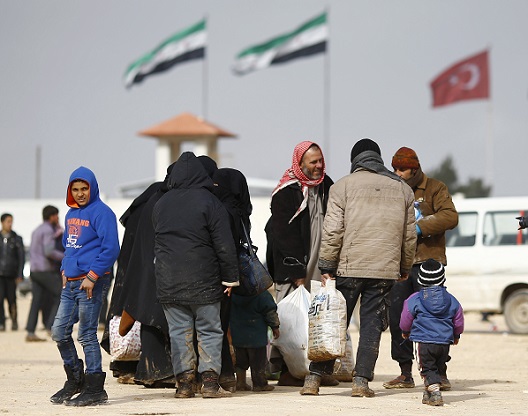 Lately, the high geopolitics of events in Aleppo have rightly received a great deal of attention. Yet, while observers try to divine the great power intentions of the United States and Russia from diplomatic maneuvers and statements, local developments can be a better gauge of international intentions. This week, a new rebel coalition formed in beleaguered, opposition-held Aleppo. Jaysh Halab (Army of Aleppo) represents an attempt by an often-fragmented insurgency and its backers to present a united front against regime and Kurdish forces taking and encircling opposition territory. Jaysh Halab’s creation highlights the Turkish and Saudi struggle to respond to an existential threat to insurgent groups they have cultivated for years.

Jaysh Halab consists of nine rebel factions including Islamists and Free Syrian Army groups that receive Turkish and Saudi support. Notably, the coalition was announced by a media official of Ahrar al-Sham, an important Salafi Islamist group and arguably Turkey’s most important rebel ally. Member factions pledged allegiance to none other than Ahrar al-Sham’s former commander, Hashem al Sheikh. Activists in Aleppo reportedly demanded that all Aleppo rebels join the new coalition, describing any rebel commander that refused to as “a traitor to the revolution.”

Jaysh Halab is probably the brainchild of Turkey, with likely support from Saudi Arabia (the United States may be less than enthusiastic about US-backed groups being folded into an Islamist-led coalition). Regime and Kurdish forces in Aleppo now present a grave threat to Turkish and Saudi interests. The lack of a US plan to meet this threat means Turkey and Saudi Arabia must improvise, while respecting a US veto on giving the opposition anti-aircraft weapons such as MANPADS to counter regime aircraft. The United States on the other hand has likely given up on salvaging the insurgents’ situation in Aleppo, as that would entail risks it seems unwilling to bear.

Interestingly, reports indicate Jaysh Halab’s first military operations did not target the regime but Jaysh al-Thuwar, a close ally of the Kurdish YPG militia. The link to the YPG effectively makes Jaysh al-Thuwar an enemy of both the insurgents and their Turkish backers. The YPG has opportunistically seized insurgent territory and severed critical supply lines to opposition-held Aleppo, with apparent Russian air support. Additionally, the YPG will soon control hundreds of miles of contiguous territory along the Syrian border with its enemy, Turkey. The significant YPG presence in Aleppo city itself will only exacerbate tensions between its Jaish al-Thuwar allies and Turkish-backed insurgents. YPG gains represent a mortal danger to the insurgents in Aleppo—equal to the regime offensive. Jaysh Halab and Turkey, therefore, see both as enemies.

Saudi Arabia’s influence in the Jaysh Halab initiative is more difficult to gauge, but it has obviously been trying—and thus far failing—to shore up its insurgent allies against a victory by Iran and its local partners. To that end, Saudi Arabia has offered to send ground troops to Syria to fight the Islamic State (ISIS or ISIL) in an attempt to mobilize the United States into taking action in Syria. This tactic clearly failed and neither Saudi Arabia nor Turkey seem to have the appetite for direct military action in Syria without US participation, which is unlikely if not unfathomable.

Having exhausted their low-risk options in Syria and ruled out riskier ones, the Turks and Saudis have placed themselves in a bind. Saudi Arabia can ill afford to lose Syria to Iran and Turkey may not be able to tolerate a militant Kurdish state across its border. With direct military intervention off the table and continued deference to the United States on the issue of anti-aircraft weapons, both countries are reduced to realigning insurgent groups and branding new coalitions. This is not ineffective per se: the insurgency has long struggled with disunity. Turkish and Saudi direction was instrumental in reorganizing and consolidating insurgent groups in 2015, who went on to make substantial territorial gains. Yet the plight of the rebellion in Aleppo will require more than reorganization (though rebels in other geographies would certainly benefit from greater unity). The insurgents need direct foreign military intervention and/or anti-aircraft capability that Turkey and Saudi Arabia will not provide.

The war for Syria need not be confined to Syria itself, of course. Iranian interests remain vulnerable in its various regional spheres of influence, such as Iraq, Syria, and Lebanon. Russia itself has struggled with intermittent insurgencies and restive populations in its own territory, both of which may be vulnerable to outside provocation. These strategies carry various degrees of risk, but benefit from plausible deniability and greater control over escalation. This dynamic might make a proxy strategy in a wider geography more palatable than direct military intervention in Syria and the accompanying risk of all-out interstate war.

On the other hand, the insurgency’s backers may do very little, resigning themselves to reshuffling rebel proxies and probably watching northern Syria fall to their enemies. Over the years, the scope for useful action in favor of the Syrian opposition has narrowed, to the point that all options are now unappealing (though some are worse than others). The fact remains that the loss of northern Syria would constitute a heavy geopolitical blow to Saudi Arabia and an utter strategic catastrophe for Turkey. The Jaysh Halab experiment could, therefore, prelude far more ambitious ones.

Faysal Itani is a Resident Senior Fellow with the Atlantic Council’s Rafik Hariri Center for the Middle East.

Image: Photo: Internally displaced Syrians wait near the Bab al-Salam crossing, across from Turkey's Kilis province, on the outskirts of the northern border town of Azaz, Syria February 6, 2016. REUTERS/Osman Orsal