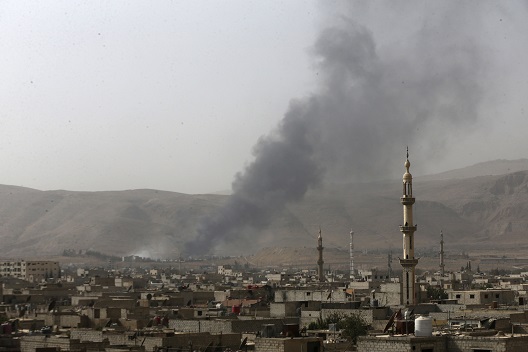 While Moscow is re-classifying armed groups as terrorist organizations on the ground in Syria, and the new US administration is attempting to identify and enable partners in its fight against the Islamic State (ISIS, ISIL or Daesh) coalition in order to set policies, we are now faced with questions that have long haunted the Syrian armed opposition: Who is a partner for peace in Syria, and does the opposition include any allies for peace and for the fight against terrorism?

There are a number of armed opposition groups involved in alliances, working in tandem with Jabhat Fateh al-Sham (previously Jabhat al-Nusra), or merging with Jabhat Fateh al-Sham under the so-called Organization for the Liberation of the Levant (Hay’at Tahrir al-Sham). These changing alliances further complicate matters for a Trump administration seeking to develop classifications as quickly as possible to unify counterterrorism efforts against what Trump describes as “radical Islamic groups.”

In order to better understand this issue, SyriaSource interviewed one of the groups focused on fighting extremist forces, the Forces of Martyr Ahmad al Abdo (FMAA), which gets its name from a First Lieutenant who defected from the Regime’s Army and led several military operations for the opposition in the Damascus countryside. Saleh al-Saleh, the Coordinator of External Political Relations for the FMAA, answered a number of questions via online correspondence.

How was the FMAA formed and how large is it?

The FMAA was formed in August 2013 by several factions active in areas of the northern and eastern Damascus countryside, such as Eastern Qalamoun, and the cities of al-Nabek and al-Dumayr. The FMAA was formed under the command of Colonel Bakour al-Salim and Captain Ahmad Tamer, and currently has 2,500 active fighters on the ground who operate throughout al-Dumayr, Al-Ruhaybah, Jayrud, al-Naseriyah, and Syrian Badiya. The group enjoys an institutionalized military system based on defected soldiers and officers, and operates according to a joint command council (JCC) that includes military section leaders and a Supreme Commander. Captain Ahmad Al-Tamer was appointed Commander in Chief and Supreme Commander of the JCC. The JCC is the FMAA’s highest military authority, and is in charge of all decision making.

The military composition of the FMAA is made up of the 07 Badiyat al-Sham Brigade, three infantry battalions, a battalion of tanks and armored vehicles, an air defense battalion, a mortar and artillery battalion, an anti-armor battalion, a reconnaissance regiment, a combat engineer detachment (mines), a security battalion, a guard, and defense battalion at headquarters. There are also defense brigades, which consist of over 200 fighters who largely operate in areas where troops are present alongside civilians in order to maintain security.

The FMAA also includes 30 defected officers from the rank of brigadier general to lieutenant, over 500 defected soldiers, and 2,000 fighters who have received basic training.

Is the FMAA’s fight limited to the Islamic State?

The point is not to solely fight the Islamic State, but geography has played an important role in the function of the group. Because of its territory in eastern Qalamoun, the FMAA had a prominent role fighting and targeting the most important military positions of the Assad regime from 2013 to 2015. The FMAA relies on an internal leadership structure that decides what it must do which is separate from the cities and civilians. Our focus is on points near military positions of the regime and those near our own control; that is what we start with. Following an agreement and ceasefire between the local council in eastern Qalamoun and the Assad regime, we had to accept and abide by the will of the civilians. So we turned our focus to the mountains and took control of large swaths of this territory.

Since its inception, the Islamic State has never been an accepted Islamic organization within Syrian society. It was always a terrorist organization with a perverted religious ideology based in extremism. When the FMAA began its fight against ISIS, it had already begun wreaking havoc and terror in northern Syria, while the FMAA was fully engaged in assaults on the Assad regime’s air bases in eastern Qalamoun. The FMAA began its fight with the Islamic State in early 2014, when it refused to accept the presence of ISIS in eastern Qalamoun and the Syrian Desert.

Do you receive material or financial support in your battle against the Islamic State from the International Coalition?

We don’t hide the fact that we have received foreign support. We have received support from the Friends of Syria Group for several years, and, as in any relationship, when there are changes in leadership, whether they are political or military, a kind of new relationship is built, and during that process, we might see a cooling of relations. That is what happened to the FMAA over the last few months. Half of our relationships with our supporting partners and allies are, for the most part, good and positive. We haven’t requested any air support or military backing from coalition forces, nor have we received backing from any other parties, because there are those that have hinted that support is limited to the brigades within the Pentagon program. They said that southern Syria and the Desert region are not priorities at the present time.

What is the FMAA’s position on the Astana Talks?

Even though our troops are present in strategic areas and are in control of large swathes of territory, we have not received any official or unofficial invitation to negotiations. So we don’t have personal representation at the Astana talks, but based on our membership in the Southern Front, which chose its own representatives that went to Astana, we are bound by the agreement.

What does the FMAA think about the recent merger of a number of Islamic factions with Jabhat Fateh al-Sham?

The issue with the merger is not with Nusra or anybody else being a part of it, it’s with the idea of a merger of an Islamic nature, one that could be described as extremist, or other ideological nature, like the ideology of al-Qaeda or an exclusionary ideology along the lines of ISIS. Any merger that is not under the banner of the Free Syrian Army, our revolution, its principles and goals, or a belief in the democratic civilian Syria of the future, is absolutely unacceptable. The FMAA has assumed the responsibility of fighting those ideologies. It was the first faction that decided to fight Islamist forces, and ISIS in particular, which is a tool for the Islamization of the revolution, giving it a terroristic nature. Not one of our fighters, regardless of the size of the enemy (ISIS), has walked away from that fight.

The FMAA considers the Assad regime to be a sectarian terrorist regime, no less murderous than ISIS, but political and military circumstances have made the fight against Islamic extremist organizations the priority. The FMAA seeks to attract young Syrians who believe in the goals of the revolution, and we are working to prevent them from going towards or belonging to Islamist terrorist factions.

What is the future of the FMAA and its political objectives?

The FMAA will continue its fight against ISIS and Assad forces, but our priority is to establish our free future state, and in so doing, achieve the aspirations of our people, from which the revolution emerged. The Forces of Martyr Ahmad al-Abdo is a revolutionary entity which aims to overthrow the Assad regime and calls for all perpetrators of war crimes to be brought before local and international courts. The FMAA also calls for the elimination of all transnational sectarian militias supporting the regime, because they, like ISIS, are terrorist entities alien to the Syrian people, and they hold ideas that are completely different from those to which Syrians generally aspire. These are the goals that center on building a civil Syrian state based on law, justice, and equality.

Image: Photo: Smoke rises from what activists said was a military position for forces loyal to Syria's President Bashar al-Assad after clashes with Army of Islam fighters, on the eastern mountains of Qalamoun overlooking the town of Douma, eastern Ghouta, near Damascus, Syria September 13, 2015. REUTERS/Bassam Khabieh