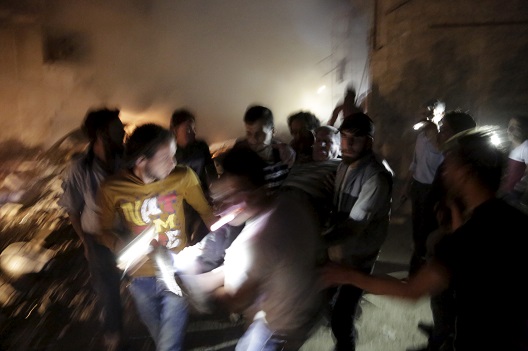 Men carry an injured man at a site hit by what activists said was a barrel bomb dropped by forces loyal to Syria's President Bashar al-Assad in Maaret al-Naaman town in Idlib province June 4, 2015. (Reuters)

The Rafik Hariri Center hosted a private meeting on June 3 to discuss the policy implications of a remarkable report issued by the Syrian American Medical Society. Entitled Slow Death: Life and Death in Syrian Communities Under Siege, author Valerie Szybala placed under the microscope one aspect of the Assad regime’s mass homicide survival strategy. By completely surrounding and sealing populated areas, the regime deliberately and systematically deprives civilians of food, medicine, and fuel while targeting infrastructure—especially hospitals—with air strikes and artillery barrages. To quote the report, “Hundreds of thousands of people experience unspeakable suffering every single day. The sieges being imposed on civilians in Syria have been allowed to continue and worsen for an excruciatingly long time—some as long as three years—without decisive international action.” In the Security Council, Russia is the main enabler of these atrocities. On the ground, it is Iran.

The report cites the UN Independent International Commission of Inquiry on the Syrian Arab Republic in describing Syria’s sieges “as a tactic of attrition used by the Syrian government against areas considered sympathetic to the opposition or containing armed fighters. Syria’s sieges—which deliberately and disproportionately inflict massive harm on trapped civilians—are a method of collective punishment.” Iran has it in its power to compel its client to lift these sieges and permit humanitarian assistance convoys, in accordance with UN Security Council Resolutions, immediate and sustained access. It has not done so. Has it even been asked to do so?

The Obama administration—when asked about the responsibility of the United States to do something to protect Syrian civilians—takes refuge in the literal language of the UN-blessed Responsibility to Protect (R2P) norm. The R2P framework gives “the international community,” in cases where a state “manifestly fails” to protect its citizens from atrocities, the responsibility “to intervene through coercive measures such as economic sanctions. Military intervention is considered the last resort.”

The Assad regime has far transcended the “manifestly fails” test. Since March 2011, it has engaged in mass homicide and industrial strength terror. Yet so long as Russia vetoes any attempt by the Security Council to organize a coercive international response to mass murder in Syria, the Obama administration is content to point the finger of blame at Moscow and declare its work to be done. In this way, the administration expresses regret, assesses blame, and takes the rest of the day off.

Obviously, the framers of R2P did not anticipate that an enabler of mass homicide would be one of the Security Council’s permanent members. Had they anticipated such a development would they have regarded a Russian veto as the end of the story? This seems to be the position of the Obama administration.

Indeed, upholding a principle on paper while real human beings die in large numbers enables the administration to sustain its single-minded, one-track pursuit of a nuclear agreement with Iran; this notwithstanding Tehran’s full complicity in the signature humanitarian abomination (to date) of the twenty-first century. Must pursuit of a nuclear accord rule out hard talk with Tehran about its client’s appetite for mass murder and its own complicity in the Assad regime’s tactics?

President Barack Obama has every right to mandate an approach to Iran that focuses exclusively on the nuclear matter. It is analytically defensible for him to believe that a nuclear agreement can boost the political fortunes of “Iranian moderates” and, over time, produce positive changes in Iran’s regional behavior: changes that would presumably, in the fullness of time, get Tehran out of the business of facilitating and even encouraging war crimes and crimes against humanity in Syria. Strategic patience is a comfortable pose when someone else’s children are being slaughtered and starved.

One wonders, in the here-and-now of Syrian children losing their lives to starvation, disease, and chemical-laden barrel bombs, if US diplomats are bracing their Iranian counterparts on these issues. President Obama’s aversion to military steps aimed at protecting people is well known. He even reportedly assured Iran’s Supreme Leader in writing that coalition airstrikes in Syria would not be aimed at Tehran’s murderous client. Does the subject of regime criminality and Tehran’s support for it even come up in official discussions?

The administration knows there are military steps it can take to complicate the ability of the Assad regime to drop barrel bombs—some containing chlorine canisters—on civilian residential areas. These steps would require no US boots on the ground, no invasion, no occupation, no slippery slope, and no mission creep. Collective punishment sieges, however, are something else. It is difficult to imagine discreet, low profile kinetic actions that could lift sieges and save upwards of 640,000 human beings: the report’s estimate of the number of people subject to this loathsome tactic. The same might be said of the tens of thousands of Syrians rotting away in regime prisons, where they undergo torture, starvation, and sexual abuse.

Set aside feasible military measures. Is the Obama administration intensively engaging Iran on the subject of war crimes and crimes against humanity in Syria? Is there any attempt at all to incline Tehran toward obliging its client to get out of the business of mass murder and collective punishment? Or does the administration see this issue as a distraction; a time-waster in the process of seeking a nuclear agreement before June turns to July?

Iran stands to gain a great deal from the envisioned nuclear agreement. Having successfully pursued a policy of regional hegemony without nuclear weapons—weapons that could have complicated interventionist behavior by prompting regional nuclear proliferation and making everything a potential nuclear confrontation—Iran now stands to be paid handsomely for lengthening its “breakout period” by several months for perhaps fifteen years. For a US President set to yield his office in twenty months, fifteen years is a long time. For Iranians it is a blinking of the eye. For the Obama administration, an agreement would stem nuclear proliferation. For Iran, there is the prospect of being rewarded monetarily for doing that which is manifestly in own interests: sanctions relief that can help finance its support of the Assad regime.

President Obama has made an effective political case for his objective and his approach. He might improve the case he is making to Congress and to regional allies by placing the humanitarian abomination in Syria on an equal footing with the nuclear issue in his administration’s official interactions with Iran. Tehran can improve its prospects for comprehensive sanctions relief if it obliges its Syrian client to get out of the business of war crimes and crimes against humanity.

The Obama administration sees Russian Security Council vetoes as taking it off the hook for trying to protect Syrian civilians. Iran, under current management, is fully at home with murder and mayhem. To the extent both sides truly want a fully implementable nuclear deal, perhaps the saving of Syrian lives can have a practical utility that obviates the need for moral reflection: a win-win outcome for both sides.