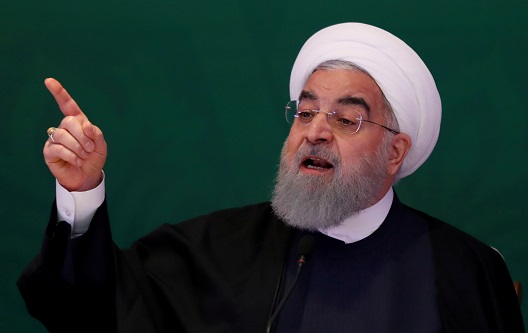 On the night of April 29, air strikes targeting Syrian military positions in Hama and Aleppo reportedly hit two Iran-linked bases resulting in a giant explosion measuring 2.6 on the Richter scale. According to a former head of military intelligence, this indicates the target may have been a weapons depot that was highly explosive, stating “the level of explosion that even moved the needle of an earthquake detector is not from the munition that attacked these places, but from the target.”

While it remains unclear who carried out the strikes, some Syrian media reports blamed Israel, while others suggest it was a US attack launched from Jordan. Several unnamed American officials nonetheless told NBC news that Israel was behind the airstrike aid and appears to be more actively preparing for conflict and potentially seeking American assistance. How and if Iran chooses to retaliate will shape the future of a possible conflict in Syria that appears to be increasingly unavoidable between the two regional powers. But can Iran break away from its favored low cost disruptive warfare across the region before its next conflict against Israel?

According to some estimates, the overnight missile attack against the 47th Brigade base in Hama is believed to have killed between sixteen to thirty-eight with most casualties being Iranian; although reports vary. Iran dismissed the claims, saying that reports of the attack and the death of Iranian military advisers are baseless. Still, one source close to Hezbollah says, “The figure is much higher, with over eighty Iranians killed.” These numbers could not be independently verified.

The attack comes amid rising tensions between Iran and Israel following an alleged Israeli airstrike earlier this month on Syria’s T4 air base in Homs that killed seven Iranian military personnel. The head of the Iranian National Security and Foreign Policy Committee, Alaeddin Boroujerdi warned that Tehran had the right to respond to Israel. “We will respond to Israel at the right time and place, ” he said.

Yet until now, Iran and its proxies have refrained from widespread retaliation on Israel, despite the latter conducting over 100 strikes on Tehran’s interests since the beginning of the war. The most serious known confrontation to date was the downing by Syrian anti-aircraft fire of an Israeli warplane returning from a bombing raid on Iran-backed positions in Syria in February.

Iran’s relatively muted response is rooted in a military dilemma it currently faces in Syria. Israel’s attacks against Iranian interests are getting bolder by the day, but since the end of the Iraq-Iran war in 1988, Tehran has shied from conventional warfare and prioritized lower cost, disruptive, and asymmetric warfare.

Asymmetric warfare is generally favored by a weaker power against a stronger power with resources difficult to match. In 2018, Iran’s military budget was between $7 to $10 billion, while Israel’s amounted to $20 billion. Iran’s strategy of asymmetric warfare recognizes that the country has little chance of winning a face-to-face military confrontation against powerful enemies such as Israel and the United States. Instead, Iran has successfully caused immense harm while avoiding a faceoff with regional and international powers.

Tehran has resorted to fighting its enemies on foreign soil, in countries plagued by systemic vulnerabilities, through assassinations, and the creation of legitimate proxies. This has allowed Tehran to expand its domination in these fragile countries and force its enemies into a difficult balancing act with these countries legitimate governments or into a war of exhaustion, with a lower cost on Tehran’s already stretched financial resources.

The 2006 war between Hezbollah and Israel is a case in point. Iran’s attempts to consolidate power over regional countries can be seen in the assassination of figures that oppose its agenda. The 2005 assassination of then-prime minister Rafik Hariri in 2005 is suspected to have been carried out by members of its proxy Hezbollah, and the killing of former Yemen president Ali Abdallah Saleh was attributed to the Iran-backed Houthis, which appears to have received the blessing of the IRCG.

Another successful move falling within Tehran’s disruptive policy has been the buildup of powerful proxies in Syria and Iraq, which could be eventually used against Israeli and American interests. In the last few months, two pro-Iranian Iraqi Shia paramilitary leaders, namely Assaib Ahl al-Haq Secretary General Kais Khazaali and the head of Harakat Hezbolla al-Nujaba  Akram Kaabi, threatened Israel with retaliation in the event of a war on Hezbollah.

Iran has also used dormant cells as a weapon. In 2015, Cypriot police arrested a Hezbollah member planning an attack on Israeli interests in Europe. Several alleged Hezbollah cells have also been dismantled in the Arab region in recent years. That same year, Kuwait charged twenty-six people with spying for Iran and Hezbollah, and of plotting attacks against the Gulf state. In April 2016, the United Arab Emirates prosecuted several Hezbollah members on charges of gathering intelligence on the country’s political, military and economic activity. In June 2016, Riyadh revealed links between Hezbollah and a cell assigned to launch attacks against security officials in the Awamiyah village, located in the east province of Al Qatif, which is home to the Saudi Shiite community. In June last year, the US Department of Justice confirmed that two men linked to Hezbollah were arrested on charges related to planning attacks against Israeli and US targets in Panama and New York.

Iran’s preferred method of action—employing indirect tactics and waging mid- to high-intensity warfare via proxies—means that for now, Iran will likely avoid a conflict that would play to Israeli strengths. However, Tehran cannot and will not stop its military build-up in Syria, which Israel will not tolerate. Increased tit-for-tat escalation could eventually lead to some form of conflict. What shape this war will take remains to be seen, but given Tehran’s precedent, it will probably resort to its usual playbook for as long as possible.