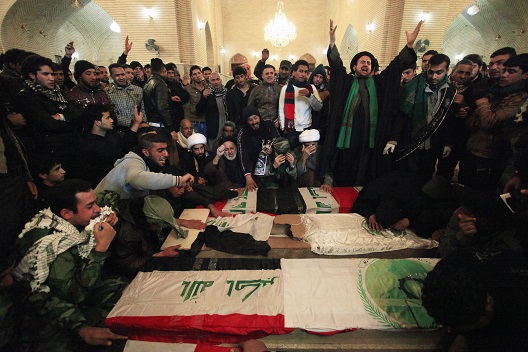 While the Shia led government in Baghdad is engaged in a determined effort to wipe out the Islamic State (ISIS, ISIL, Daesh) from Iraqi territory, the very Shia militias, which constitute the backbone of the government forces, are simultaneously engaged in combat operations in neighboring Syria.

As incomplete as the publicly available data may be, a detailed analysis of Iraqi combat fatalities in Syria compared with those in Iraq, provide us with some answers to this question. The data on Iraqi Shia fighter deaths is taken from public sources (particularly www.alnujaba.com, http://nujabaa.com, and http://www.saidshuhada.com/). Based on these sources, 263 Shia Iraqi losses in Iraq in the same time period were identified by this author.

Clearly, these numbers do not reflect the real size and scope of Shia Iraqi losses in Syria and Iraq, which are likely to be in their thousands and not hundreds. The real numbers however, remain unknown due to a combination of secrecy on the part of the militias and absence or incompetence of bureaucratic organizations in Iraq.

However, the very participation of Shia Iraq nationals in combat in Syria raises at least two fundamental questions: First, why fight the Islamic State in Syria with the enemy present on Iraqi territory? Second, how come the Iraqi Shia who take part in the war in Syria are affiliated with five different militias and are not organized in a unified Shia militia?

Compared with other nationalities, the Iraqi Shia seem to have suffered very few losses in Syria. The relatively low number indicates participation of Shia Iraqis in the Syrian civil war primarily serves political propaganda rather than military purposes. It not only communicates the message of transnational Shia solidarity under Tehran’s guidance, but also sends a message of the Islamic Revolutionary Guards Corps (IRGC) and its proxies’ ability to simultaneously engage in combat operations in two different theatres of war—apparent in simultaneous peaks in combat fatalities in Iraq and Syria, in particular since November 2015.

Figure 2: Shia Iraqi nationals killed in combat in Syria and Iraq and month of death

Place of death in Syria of the Shia Iraqi militiamen further clarifies they were not just deployed along the shared Iraq-Syria border area, but take part in operations all over Syria. The place of death of the majority cannot be established, but it is known that twenty died during the siege of Aleppo, seven died defending Latakia and two were killed in the suburbs of Damascus. This in turn indicates the Shia Iraqis take part in joint operations with other Shia militias such as the Lebanese Hezbollah, the Afghan Fatemiyoun Division, the Pakistani Zeinabiyoun Brigade and, of course, the IRGC. Apart from the propaganda value, this approach fosters a sense of camaraderie among Shia from different countries. (Figure 3)

However, the IRGC’s attempt at fostering transnational camaraderie among the Shia militiamen does not reflect an IRGC interest in unifying the Shia fighters within the same national group. On the contrary, further investigation into the militia affiliation of the Shia Iraqis killed in Syria, shows they are enrolled in five distinct militias, with the Harakat al-Nojaba suffering half of the losses. These numbers however, must be treated with the greatest care: while certain Shia Iraqi militias may find it politically expedient to disclose the identity of their lost fighters, others may prefer secrecy. Both attitudes impact the ability to assess the size and scope of the presence of those militias in the war in Syria. (Figure 4)

Time of death of the militiamen further points at the Shia Iraqi militias fighting separate from each other and not in a unified Shia Iraqi contingent.

This in turn raises the question of why Tehran supports existence of several Shia Iraqi militias rather than unify them within the body of a single unit?

Tehran’s approach serves several purposes: on the one hand, the IRGC supports Shia Iraqi militias to secure Shia rule over Iraq as part of the land corridor connecting western Afghanistan in Central Asia to Lebanon on the shores of the Mediterranean. Simultaneously, Tehran supports subnational Shia groups, rather than national level groups, to avoid promoting a Shia nationalism that would object to Iran’s interference in national and even regional affairs. The fact that Iraq is in permanent state of low intensity crisis, somewhat do to Iran’s own actions, makes individual Iraqi Shia groups dependent on Tehran for their survival.

The IRGC’s complex approach towards the Shia Iraqi militias and maintaining the balance of power amongst them is as sophisticated as it is perilous: if they were able and felt that Iran’s approach was to their detriment, they may unite and turn against their patrons in Tehran. That scenario is not likely to materialize as long as there is a common enemy, in this case the Islamic State, and as long as the region remains fragmented and in constant turmoil.

Ali Alfoneh is a nonresident senior fellow at The Atlantic Council.