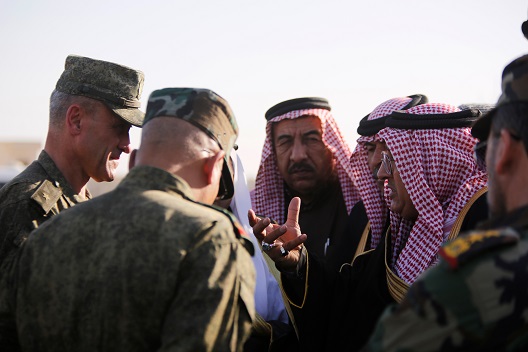 As operations in areas of eastern Syria cleared of the Islamic State (ISIS, ISIL, Daesh) transition from immediate humanitarian response to longer-term stabilization efforts, the establishment and empowerment of inclusive, representative, and legitimate local governance will be crucial in preventing the resurgence of extremism and violence. Understanding the current conditions of local governance in this region, especially relating to both Arab and Kurdish populations, will be essential to consider in framing US policy in Syria moving forward.

Governance in eastern Syria has undergone considerable change in the past decade. Although the majority of the population in the region belongs to a clan or tribe, the societal transformations surrounding the war have diminished the influence of tribal governance. Since the Tanzimat reforms of the Ottomans in the nineteenth century, tribal Arab communities in the east became accustomed to engaging with a strong central authority in Syria. Under Hafez al-Assad, tribal leaders were absorbed into the state’s administrative structure through a campaign of appointments and legislation that aimed to co-opt local elites by making them intermediaries for Damascus; offering them prestige, but little power. This reduced tribal leaders’ traditional authority over their constituencies, which relied more on the central government for the provision of public services, and grew conscious of their leaders’ increasing clientelism.

After the uprising in 2011, the Assad regime lost control over much of eastern Syria, as most members of tribes revolted against the regime. Many tribal elders, however, sided with the government, not wanting to forfeit the privileges they had previously enjoyed. This rift contributed to the breakdown of local government legitimacy and community cohesion. Fearing the empowerment of pro-opposition groups in the region, the Syrian government allowed the Kurdish Democratic Union Party (PYD) and its military wing, the People’s Protection Units (YPG), to take over northern cities including Kobane, Afrin, Manbij, and most of Hasakah province in order to keep these territories in relatively friendlier hands – Kurdish leaders established a working relationship with the central government under Hafez al-Assad, who allowed the Kurdistan Workers’ Party (PKK) to operate out of northern Syria and sought to co-opt them as he had Arab tribal leaders.

Tribal Arab communities thus found themselves in territories under Kurdish control, but lacking governance. This transition created openings for new political actors, among them radical Islamist groups such as ISIS, to exploit tribal and ethnic divisions and advance their own interests. As a result, tribes in the east became more isolated from one another, radical movements took root, and new ethnic tensions were introduced to the Syrian conflict as Arabs came to resent the failures of a predominantly Kurdish political structure.

The PYD struggled to navigate governance in Arab-majority territories under its control. When the PYD first came into power in Syria’s northeast, the party used the idea of democratic federalism espoused by Abdullah Ocalan; a concept of autonomy and inclusion familiar to the region’s native Kurdish inhabitants. This concept is the most radical form of decentralization, which would greatly expand the powers of the PYD. However, the Kurds in northeastern Syria are not an ideologically homogeneous group, and tensions persist within the Kurdish community over whether to directly accept Ocalan’s ideology, especially given the problems this creates with Turkey, which sees the PYD as an extension of the Kurdistan Workers’ Party (PKK) because of this. Despite internal disagreements, the threat of external attack on Kurdish peoples, especially by Turkey, has necessitated a degree of unity, and the PYD’s ability to outmaneuver its opponents made it the most viable option for protection in the region.

Finding itself the dominant political force in the northeastern region, the PYD set about reshaping education and political structures. In its core areas, the PYD introduced curriculum that de-emphasizes Arab nationalism in favor of their own vision of governance. Seeking to legitimize itself by fighting ISIS in a meaningful way beyond the defense of its own territories, the PYD, through the YPG and eventually the YPG-dominated Syrian Democratic Forces (SDF), began to expand its fight against ISIS. As the PYD gained control of ISIS-occupied areas and enlarged its territory, it faced challenges within the local community.

In an effort to integrate territories under its control and move away from the state model based on fourteen provinces, the PYD implemented a new administrative structure. It created the umbrella group the Northern Democratic Federation of Syria (NDFS), or “Federation of the North,” in 2016. The PYD, through the SDF, took parts of Raqqa, Hasakah, and Aleppo provinces and consolidated them into one body, which manages most Kurdish-held areas to this day. It also established a network of civil councils to give some political access to Arab-majority areas in an effort to involve locals; without directly empowering them within the political superstructure. The PYD has taken other steps to include Arabs, such as entrusting the provision of local security in many areas, such as parts of Deir Ezzor east of the Euphrates, to Arab-majority groups. This is partly to avoid the problematic exclusion of locals, and partly to assuage the SDF’s overstretch problem. Despite this, leadership positions in security remain dominated by Kurdish commanders within the YPG.

The Kurds dominate leadership positions not only in security, but also in governance. The Kurdish-implemented political structure in eastern Syria positions the NDFS at the top, including political components of TevDem, a political coalition led by the PYD, and the Syrian Democratic Council, which is the political wing of the SDF. Below this, there are regional councils dominated by TevDem and their political allies. The regional councils also include some independent Arab politicians who see the value in political access, but refuse to align with TevDem.

However, Arab participation in regional councils overall is reduced by the weakening of broader tribal relationships as the Syrian conflict caused Arab communities to turn inwards. The most local tier of the political structure—which also sees the greatest Arab component—is the commune or municipality level. There are around 3,000 local councils at this level, which provide public services and security, but have no direct legislative authority.

This structure allows for some local autonomy, but within the confines of NDFS control and SDF command. Essentially, the PYD and its affiliates have introduced an entirely new political system to ensure the security of areas they have taken from ISIS, while the underlying sociopolitical dimensions of these localities remains unchanged. For now, the best chance for Arabs to gain political access within the Kurdish-dominated structure appears to be to run for local councils at the commune level, join municipal civilian protection units, or join the SDF, which is increasingly recruiting Arabs. However, if the US and its allies become more involved in stabilization efforts in eastern Syria, it will be crucial to find a solution to local governance that addresses issues of legitimacy and representation.

Such a solution must encourage broader political participation and the inclusion of Arabs in the political structure beyond the commune level. If the US along with its partners and allies do not make this a priority, Arab communities may look for opportunities for empowerment within groups that do not share US interests, whether they be Iran-backed militias and Assad-aligned forces in Deir Ezzor or extremist groups such as Jabhat al-Nusra and ISIS splinter cells. Broader political participation can be increased through economic incentives, quota systems, and educational campaigns, but broader political empowerment will require negotiation with the Kurdish leadership. These efforts should also be supplemented by reconciliation efforts to foster community cohesion, such as psychosocial support and depoliticized education. Ameliorating ethnic tensions will require a multi-faceted approach. If local communities feel resentment towards political disenfranchisement and inefficient public services, the region could backslide into the conditions which precipitated the rise of ISIS. It will be crucial to consider the long-term ramifications of interim governance structures and stabilization efforts in this light.

Emily Burchfield is a program assistant at the Atlantic Council’s Rafik Hariri Center for the Middle East.