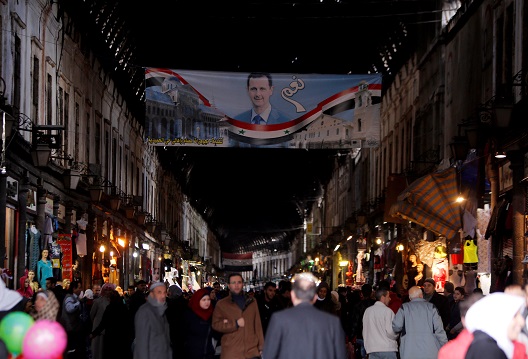 Between Moscow and Washington there is agreement on the desirability of a Syria reflecting territorial integrity, stability, empowered local governance, legitimate national governance, an active civil society, and a country rebuilding its physical infrastructure and its sense of shared citizenship. Even Iran might pose no objection to such an outcome, provided Syria remains a superhighway for weaponry, training, cash, and other sorts of assistance to the leadership cadre of Hezbollah in Lebanon. Setting aside Tehran’s special relationship with Lebanese drug runners, money launderers, and assassins, is there a way for Russia and the United States together to help create a foundation for political legitimacy in Syria?

Moscow councils focusing on constitutional revision and eventual national elections. United Nations Special Envoy Staffan de Mistura is willing to give it a try. He wants to revive the Geneva peace process over which he presides with discussions between the regime and opposition designed to revise and even replace the current Syrian constitution, which vests in the president of the republic overwhelming powers.

On the one hand, this pivot from peace negotiations on political transition to debating constitutional clauses is profoundly regrettable. Russian Foreign Ministry negotiators in Geneva in June 2012 agreed to a specific procedure that could, by definition, produce peaceful, stable regime change in Syria. They knew what they were signing.

But neither Bashar al-Assad nor President Vladimir Putin were pleased by the contents of the Final Communique of the Action Group on Syria, wording agreed by the permanent five members of the United Nations Security Council. Russia’s backtracking began before the ink had dried, and its military intervention in September 2015 was designed to kill forever the idea of a transitional governing body arrived at by government and opposition through mutual consent (mutual veto).

Today’s focus on a constitution reflects the success of Moscow’s intervention. Having been carried on the shoulders of Russian airmen and Iranian-commanded militiamen to what some would incautiously label victory, Assad has been able to mock the United Nations-supervised Geneva peace talks. With political transition on the agenda, he steadfastly refused to engage the opposition delegation in discussions. The only transition of interest to him has been the one brought about by Russia and Iran: from a regime going down to an entourage still in place, still making money, and still orchestrating state terror and mass homicide.

Moscow correctly, if cynically, notes that political transition via a negotiated transitional governing body—something explicitly blessed by the UN Security Council—is no longer a pertinent item for discussion. Instead, if there is to be transition it should be a slow-motion process involving a changed constitution and national elections. Given the conditions Russia has created on the ground, its preferred way forward seems, at least superficially, infinitely preferable to the continued suffering of millions.

Still, it is legitimate to ask if there is anything real in the Moscow initiative. Skeptics would say that the current constitution could suffice in protecting the lives and property of Syrian citizens were the president of the republic not a mass murderer. Skeptics would warn that Russia is merely buying time to help its loathsome client regain rule over the entire country. Skeptics would enumerate the minimal conditions necessary for free and fair elections and ask which decade Moscow has in mind for polling places to open.

But skepticism alone does not suffice for arriving somewhere near the truth and for framing realistic policy options. There are thoughtful members of the Syrian opposition inclined to work with Moscow; they say they see Russian influence behind some potentially positive changes in the regime’s security apparatus; they think the Kremlin has an acute appreciation for just how corrosive Bashar al-Assad and his immediate entourage are to the image Russia hopes to project in the region and beyond.

Obviously, the nature of the Assad entourage/regime does not lend itself to sharing power, yielding power, or showing deference to a legal document. Unless power dynamics in Iran shift away from the Revolutionary Guard Corps and its marauding Quds Force, Tehran will work hard to keep in place the only Syrians willing to subordinate their country to Hezbollah and its master. But what about Moscow?

Russia recently begged the opposition in Vienna to come to Sochi and participate in a Russian diplomatic extravaganza. All the opposition asked for in return was that the regime cease its murderous assaults on residential areas in East Ghuta and elsewhere. Moscow could not or would not deliver. Now, Staffan de Mistura wants to orchestrate serious discussions in Geneva on revising or replacing the Syrian constitution. Can Moscow compel its client to cooperate? Will it?

If the mass murder of Syrian civilians continues—and especially if Russian pilots participate in it—Washington and its partners may safely conclude with respect to Russian benign intentions in Syria what Gertrude Stein saw in Oakland, California: “There’s no there there.” Moscow knows quite well that civilized discussions over constitutional clauses cannot take place while the constituents of one party are being terrorized, vaporized, and scattered to the winds by the warplanes and artillery of the other. Will it stop the mass murder? Can it? We shall see.

And if Moscow does muzzle its rapacious client, will it then force him to act seriously and responsibly in Geneva? Can it? If the slaughter stops, we shall see.

In the Obama administration there were officials absolutely determined to take reassuring Kremlin words at face value. They had no choice: the president armed them with nothing in the way of leverage.

If the slaughter in Syria continues—replete with weaponized chlorine terrifying children and making a defiant mockery of another American president’s chemical warfare red line—will the Trump administration come to the proper conclusion about Russian intentions? Can it? Will it? Or will it too, hobbled by indecision and hoping for a miracle, join its predecessor in whistling past the graveyard of Syrian bodies and American reputation?