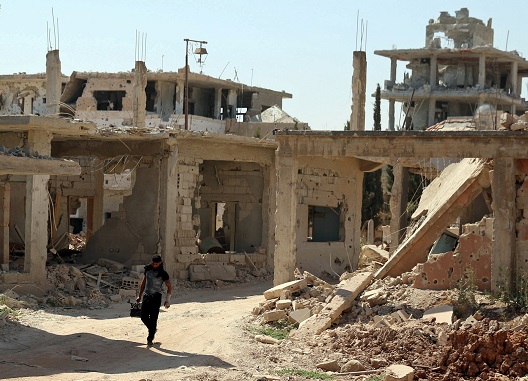 The relative quiet prevailing in southwestern Syrian beginning on Sunday, July 9, 2017 is a good thing. Assad regime barrel bombs have stopped falling on civilian residential areas. The prospect of a Syrian refugee surge toward Jordan has diminished. Is this ceasefire something different from the failed “cessation of hostilities” of early 2016? Or is it merely a prelude to more mass murder?

The differences between February 2016, when the ill-fated cessation of hostilities was announced, and now are potentially significant. Whether that potential can produce a ceasefire that holds and even expands remains to be seen. As American officials have made clear, all there is right now in terms of a ceasefire mechanism is an announcement.

Seventeen months ago, eastern Aleppo was still in rebel hands, so it was essential for the Assad regime and Russia eventually to replace the cessation of hostilities with an air campaign focused broadly on civilians and specifically on medical facilities. Iranian-led foreign fighters were also an essential part of the military campaign to secure all of Aleppo for the regime.

In mid-2017 southwestern Syria is, from Moscow’s point of view, a politically attractive place to stabilize. Yes, the Kremlin would prefer to see this region and all of Syria brought nominally under the control of its client regime. But it respects the military strength of anti-regime forces in the southwest and it worries that engulfing Jordan in a potentially destabilizing refugee crisis could increase Israel’s appetite for airstrikes against regime forces and Iranian-led militiamen. Stabilizing the southwest could, therefore, help protect the regime.

In 2016 Russian President Vladimir Putin and Foreign Minister Sergei Lavrov held their American counterparts in total contempt. President Obama had publicly proclaimed his 2013 “red line” climb-down as his proudest moment. Secretary of State John Kerry’s Syria diplomacy combined boundless energy with zero leverage. For the denizens of the Kremlin, the United States in the context of Syria and perhaps more broadly, had become a laughingstock.

On the morning of April 7, 2017, the laughing died down as American missiles landed on the Syrian air force base from which a deadly chemical attack on civilians had been launched days earlier.  Subsequently Washington made it clear to Moscow, as well as to the regime and Iran, that further chemical attacks would draw similar responses and that American trained-and-equipped forces fighting ISIS (ISIL, Daesh, Islamic State) would be protected from attacks by the regime and its supporters. To their credit, most former senior officials of the Obama administration have either been supportive of the restoration of American credibility or silent.

The differences between then and now are striking, but only potentially significant. That their significance is not yet definite derives mainly from the fact that the persistence of the southwestern Syria ceasefire and its translation into something positive politically for Syria is completely in the hands of Russia. As was the case in early 2016, there is no American or Western “or else” if some combination of the Assad regime, Iran, and Russia elects to resume a civilian-centric military campaign. Whether there is real value in this initiative beyond today’s cessation of regime terror bombing is entirely bound up in the willingness and ability of Moscow to prevent Syria becoming a joint Assad family-Iranian criminal enterprise: a failed state attractive to transnational terrorists.

Indeed, part of Russia’s calculation may involve putting southwestern Syria on ice so that the regime, Russia, and Iran can take full advantage of the United States Central Command’s (CENTCOM) invitation to the Assad regime to reestablish itself in eastern Syria provided it and its Iranian-led foreign Shia militiamen concentrate their fire on ISIS instead of those trying to shut down the ersatz caliphate. The CENTCOM invitation capped a post-ISIS stabilization policy and planning failure of epic proportion, one subjecting eastern Syria not only to the kind of Assad governance that opened the vacuum for ISIS to fill in the first place, but the additional destabilizing indignity of ill-disciplined Shia foreign fighters running amok in an overwhelmingly Sunni region. By freezing southwestern Syria, Moscow may be enabling the regime and Iran to marshal the ground forces required to take full advantage of the CENTCOM invitation.

If this “freeze the southwest to take the east” scenario is driving Russia’s strategy, one may then assume that today’s ceasefire will eventually go the way of yesterday’s cessation of hostilities. This possibility can be mitigated in part if Washington tells Moscow privately that it reserves the right to respond militarily to any Assad regime act of mass civilian slaughter, not just those accomplished with chemical weaponry. Indeed, this form of “or else” could usefully be applied to the current ceasefire if the regime —as it did in early 2016—uses the presence of al-Qaeda elements as justification for terrorizing, killing, and maiming civilians.

It is not proper simply to dismiss this ceasefire initiative as a replica of that which failed in 2016. Russia’s apparent willingness to post military police on the ground as monitors could indicate it has the regime and Iran on board for something that may last more than ten days.

For the United States, however, to leave all the cards in the Kremlin’s hands would be a mistake. It may be too late to help decent, non-Assad governance take root in eastern Syrian areas liberated from ISIS. But one fact remains immutable in Syria: nothing good will happen politically if civilians remain on the regime’s bullseye. This is precisely why mass homicide and collective punishment form the core of the Assad family’s political survival strategy. If Washington is willing to complicate and frustrate the regime’s ability to commit mass murder—and not just in southwestern Syria or with chemicals—it will have a powerful diplomatic card to play for the sake of a future Syria that is something other than a bleeding carcass on which the family, Iran, and the extremists they spawn will feed and threaten the West for decades to come.

Image: Photo:A Free Syrian Army fighter carries a weapon as he walks past damaged buildings in a rebel-held part of the southern city of Deraa, Syria July 9, 2017. REUTERS/Alaa Al-Faqir