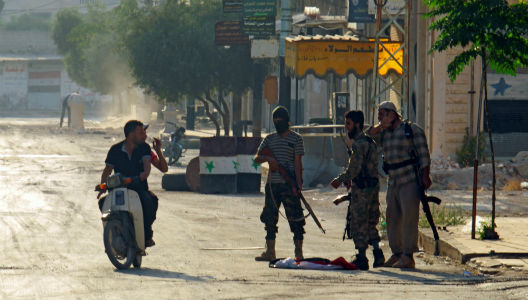 Among those killed were leader Abu Talib from Ahrar al-Sham, which resulted in a call to arms for all combatants in Idlib. On Saturday, two kidnapping operations were conducted: one hostage is a young man from Ahrar al-Sham named Abu Marya, and the other is a correspondent from Orient News TV named Mohamed al-Ashqar, who was kidnapped while in the city of Saraqib. According to an unnamed source, the reporter was kidnapped by Jund al-Aqsa, working in concert with others. The fate of the two hostages is still unknown.

Abu Yahya al-Hamawi, leader of Ahrar al-Sham, sent 18 tweets confirming that leaders of Ahrar al-Sham were assassinated by cells operating under Jund al-Aqsa on orders from Raqqa, describing it as “part of the systematic assassinations and kidnappings, which our troops have been victim to in the past, and from which no faction is safe.”

Jund al-Aqsa continue their activities, which affect groups of people fleeing from the conflict as well as fronts with the regime, a situation reminiscent of how ISIS first went after opposition groups to seize territory from them. “We have taken a long time, and been even more patient waiting to respond to their violations and the destruction they have wrought, and return them to the right path,” says al-Hamawi. “It is not out of inability, but out of mercy for the Levant and its people; Permission [to fight] has been given to those who are being fought, because they were wronged. And indeed, God is well able to grant them victory [Quran 22:39].”

In response to the kidnappings, Ahmed Qara Ali, an official spokesman of Ahrar al-Sham, released a statement by the group giving Jund al-Aqsa 24 hours to free its hostages. He also stated, “The presence of security cells connected to members of ISIS under Jund al-Aqsa’s protection is nothing new. They are the source of all recently captured cells, as well as the recent attacks on Ahrar al-Sham and all other mujahid factions. Jund al-Aqsa’s troops have repeatedly disavowed them as unbelievers. Ahrar al-Sham has turned a blind eye to their most recent attacks out of a sense of responsibility and care for the revolution… but today, we find ourselves tasked with a religious duty to put an end to their violations. We give Jund al-Aqsa 24 hours from when this statement is released to free our brothers and the rest of the hostages, otherwise we will be forced to take action.”

According to Abdel Razzaq al-Mahdi, who holds a doctorate in Islamic sharia and is close to Ahrar al-Sham, these men are still held hostage and negotiations have stalled. Over the weekend, Ahrar al-Sham launched a siege on the city of Sarmin while coalition aircraft created a tight ring around the city in the skies overhead. Sarmin is considered a stronghold for Jund al-Aqsa, just as it was for the Dawood Brigade, before they moved to Raqqa in early 2015 and announced that they had joined with ISIS.

Meanwhile, most jihadist groups have declared that they will remain neutral, and will only fight the Syrian regime, or what they call “drive back the enemy conducting the attack,” that is, fighting the enemy engaging in an unjust offensive in the country, like regiments from Chechnya and the Caucuses that were working with al-Aqsa. They stopped working with them, and announced that they would remain neutral and not fight Ahrar al-Sham, given the discovery of cells operating under ISIS.

Leaders from Jund al-Aqsa have accused Ahrar al-Sham of seeking to stop the battle for Hama after Jund al-Aqsa seized control of villages in the countryside north of Hama, most importantly, the village of Ma’an. It is somewhat surprising that Abdullah al-Muhaysini, cleric and leader of Jaysh al-Fatah, has not released a written or verbal statement; this usually appears during such disputes and helps to resolve them.

Jund al-Aqsa is both seeking to secure a popular base, through its recent battle in Hama, and also trying to cut off the Khanaser Road, which is the only road leading to Aleppo from Salamiya in Hama, and is under regime control. There are now nearly 800 fighters in Jund al-Aqsa, most of whom believe that fighters in the Free Syrian Army are acting on Western orders. They call them “Dollar Battalions,” an often use same name to refer to anyone fighting against ISIS, whether or not they receive support from the West. This is particularly true of late, since the start of Turkey’s military operation “Euphrates Shield.”

Jund al-Aqsa is not at odds with ISIS, and has not previously engaged in combat with it. The group announced its withdrawal from Jaysh al-Fateh halfway through this year, to the backdrop of a statement by Jaysh al-Fateh calling on fighters to combat ISIS in northeastern Syria. Neither did Jund al-Aqsa participate in recent battles for Aleppo; instead it turned to Hama to bring more supporters into its ranks. It now includes more than 1,500 fighters, aside from military operations in Hama. Jund al-Aqsa is clearly trying to rival Ahrar al-Sham, which is likely the largest opposition faction in Syria.

In the latest developments, one of Ahrar’s commanders in Hama province, Muhammad Munir al-Dabbus, was killed in an ambush at the entrance of Kafr Sijna in Jabal al-Zawiya. Immediately after, Ahrar launched a large-scale military operation, after which it claimed to have seized 30 outposts belonging to al-Aqsa in Idlib.

After Fateh al-Sham accepted Jund al-Aqsa’s pledge, Ahrar al-Sham issued a statetment demanding an independent court be formed to resolve the conflict. Fateh al-Sham agreed, and the court will be comprised of five judges, two from each of the disputing parties, and one independent.