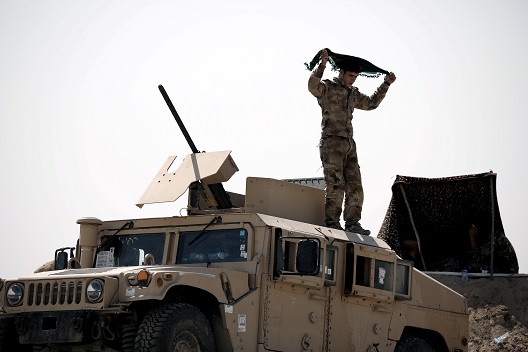 The US backed effort to territorially defeat the Islamic State (ISIS, ISIL, or Daesh) has grown more complicated in recent weeks, despite considerable progress to liberate Raqqa from ISIS. The Syrian regime’s capture of Deir Ezzor city in early September brought regime, Russian, and Iranian elements into proximity to the US-backed Syrian Democratic Forces (SDF), a multi-ethnic umbrella group dominated by the Kurdish YPG. In response to the regime’s advance, the SDF announced the start of “Jazeera Storm,” an offensive to consolidate control over the country-side east of the Euphrates river. The SDF offensive began before the United States and Russia had agreed on a specific mechanism for military deconfliction, similar to arrangements reached to manage combat operations around Tanf in southern Syria and Tabqa, the SDF controlled town just south of the Euphrates.

Lines in the Sand

The US appeared to be relying on an informal understanding, wherein the Euphrates River would divide the zones of control: Russia and the regime to the south/west and the US and SDF to the north/east. The US-Russian deconfliction arrangement relies on direct communication between the United States’ Combined Air Operations Center in Qatar and Russia’s military base in Latakia, Syria. The arrangement has worked well, with both sides exchanging information to manage the two sides’ independent bombing in Syria.

However, the exchanges do not necessarily mean that a formal understanding about “lines in the sand” have been reached. For Russia and the regime, a neat dividing line separating a regime controlled Deir Ezzor city makes little sense. The city straddles the Euphrates, although in September the regime managed to secure both the east and west sides of the city from ISIS. The SDF are approaching from the north and are within 10 km of the regime-held territory. In the event of conflict with the SDF, the city would be vulnerable to artillery/rocket attack from across the river. Moreover, Syrian oil resources and the region’s largest population centers are on the north/west side of the river, while Mayadeen, an Islamic State stronghold the US wants to liberate, is on river’s western bank. Russia and the regime have an incentive to set the deconfliction line some 20 kilometers north/east of the Euphrates river, out to the Iraqi border, while the US would like to horse trade over territory to ensure that the SDF takes Mayadeen. The SDF similarly covets control over the resources on the north/east of the river and has pledged to continue moving down the Euphrates River Valley, a scenario that challenges regime interests and risks further US-Russian tensions, independent of US goals for Mayadeen.

The absence of a clear deconfliction line runs the risk of unintended escalation between US and Russian forces.  On September 16, Russian aircraft, operating in close proximity to their US counterparts, bombed SDF positions near Deir Ezzor city. The strike injured 6 SDF members and was near US ground forces. The details about the strike remain fuzzy, including whether Russia deliberately struck the SDF, or simply made a targeting error. The second risk stems from the regime’s future intentions vis-à-vis the SDF. This leaves three main scenarios:  the two sides can reach a separate political arrangement, permanently freeze conflict, or, in the absence of a political settlement, the regime uses force to take back territory lost.

The implications for any of these scenarios will have an impact on how the US beings to plan its withdraw from Syria, independent of ISIS challenge, which could also result in a continued military presence in country. The US campaign against ISIS is territorially focused and intended to force the group from the areas it controls. The group’s territorial defeat is a foregone conclusion. However, the group’s predecessor in Iraq, Islamic State Iraq (ISI), demonstrated the capability to oversee an insurgency and a skeleton bureaucratic structure, even at the height of the “surge” in Iraq, the post 2007 increase in US forces, and the height of the Sunni resistance to ISI. The expectation in Syria is that ISIS will morph back into an insurgency and continue to carry out attacks in Syria and Iraq, similar to the actions of its predecessor organization in Iraq less than a decade before

To deal with the insurgency, US policymakers and independent think tanks, steeped in the lessons of the Iraq surge, tend to make two interrelated arguments. First, the Kurdish dominated SDF is ill equipped to navigate Arab-Sunni politics in eastern Syria, and that the specter of Kurdish oppression will fuel Arab-Sunni resentment, which benefits ISIS/Jihadist recruitment. Second, a regime offensive would have similar consequences for the region’s Sunni population, while at the same also allowing for Iran to deepen its presence on the Iraqi border. The Iranians, then, will have control over a land corridor stretching between Tehran and Beirut, which would allow for the movement of weapons to Hezbollah.

What the US has settled on is to use the SDF model to try and address both of the aforementioned issues. The US has steadfastly sought to expand the number of Arabs fighting under the SDF’s umbrella and intends to use these groups to spearhead an offensive along the Euphrates river and out to the Iraqi border. The Arab SDF groups would then take over governance, albeit under the ultimate control of Syrian Kurdish authorities. If successful, the US will have territorially defeated ISIS, prevented Iran and the regime from taking control of the Iraqi-Syrian border, and helped to install a semblance of local Sunni Arab-majority rule.

The challenge is that the further expansion of SDF control is at odds with regime and Russian interests, and, thus, the regime could use force to block the SDF. The US would have to make a choice about whether it intends to defend the SDF from regime attack. The regime could also make a dash to the border from a beachhead on the east side of the river, near Deir Ezzor city. The US, then, would have to make a choice: participate in a “race” with the regime, largely to block Iranian expansion, or sit back and watch it happen. If the US decides to challenge Iran, the options for military withdrawal from Syria grow more complicated. A counter-Iran strategy requires the US Air Force protect US troops on the ground from attack, which require a sustained presence, lest premature withdrawal simply allow for the regime and its allies to take territory the United States vacates.

The “sit back and do nothing” strategy also carries similar risks, absent a clear understanding of regime/Iranian intent vis-à-vis the SDF. The SDF could stop all combat operations after Raqqa, but will still be left in control over much of northeast Syria—and the regime will have to make a choice about what to do about it. Thus, absent a negotiated settlement, the United States may decide to stay to protect its partner force from external attack or as a bulwark against Iranian expansion until the civil conflict comes to an end.

These twin challenges are independent of the expected ISIS insurgency problem, which will also complicate a US exit from Syria. The territorial defeat of ISIS will not ensure that the group’s leaders have been eliminated. The specialized US Special Operations Task Force charged with targeting the group’s leadership could then stay to continue carrying out strikes on high-value-targets. This strategy would also help to combat the expected ISIS insurgency, resulting in an open-ended commitment to continue the counter terrorism mission in Syria long after the physical caliphate crumbles.

As a first step, the US and Russia have ample incentives to finalize a clearer line of deconfliction to prevent unintended escalation. To begin crafting an exit strategy, the US must discern regime intent towards the SDF, and whether the two sides can reconcile any differences and come to a political arrangement. The US must also articulate what role Bashar al-Assad will have in any such negotiations and whether the benefits of beating Iran and its militias to the border is worth the open-ended military commitment that “winning” would entail.

None of the above questions can be answered without first answering the basic policy questions of what the US wants in Syria: What is the US policy on Assad? Iran? What is it that the US wants in post-conflict Syria? How does that goal fit in with the myriad of external actors that will have a say over the final peace agreement. Answering this requires asking hard questions about whether it is wise for the US to maintain an open-ended presence in Syria, amid the global demands on finite military resources.

The territorial defeat of ISIS is inevitable, but the withdrawal of US forces requires policymakers to grapple with difficult questions that, as of now, remain unanswered. The US will not be able to dictate outcomes in Syria and will not get everything it wants. However, a coherent exit strategy requires making hard choices about US interests and how those fit into the broader kaleidoscope of competing actors in Syria’s civil conflict, and measure those conclusions against US foreign policy goals around the world.