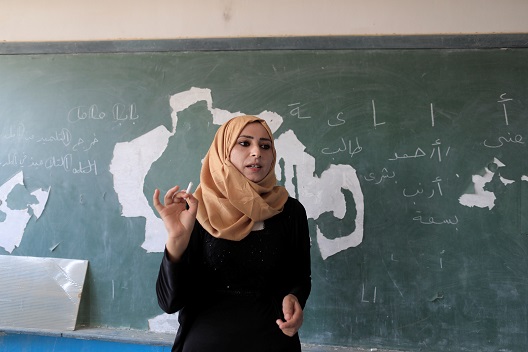 Educational administrators in Kurdish controlled areas of northern Syria believe education and literacy improves people’s lives and helps to build a better future. The Kurds do not believe that the development of education should be dependent on the current Syrian government’s curricula despite the central government’s formal legal authority in this realm to date.

On December 10, 2017, the Kurdish led-authority in northern Syria, the self-declared Democratic Federation of Rojava announced the opening of a “Kobani University” in Ain al-Arab/Kobani. The university includes two colleges: the college of science with mathematics, physics, and chemistry departments, and the college of Kurdish language and literature. It is now Syria’s third Kurdish university following the opening of universities in Afrin and Al-Jazira. The university has local residents among administrators and teaching staff.

Since the regime’s withdrawal in 2012, the Kurds have devoted themselves to teaching the Kurdish language in their controlled areas. They have established an educational system which currently requires Kurdish pupils to study in the Kurdish language at the elementary and intermediate levels; with further plans to require this at the secondary level.

Sakina Ali, the co-president of Kobani University, says that education is both a right and a proper communal foundation; that is available in every society. She adds that Kobani University was built temporarily with just two buildings forming the university’s two educational colleges. “Work is underway to build other departments,” she says. According to Ali, the university consists of a two-story building that includes offices for the directors, a laboratory, and classrooms. Ali, a mathematician from the University of Aleppo, also says they are currently working on outfitting a computer lab.

As with the region’s other universities, Kobani University is funded by the self-declared Democratic Federation of Rojava, which is one of the main reasons the university was opened. The university helps students complete their studies as “many students, especially young women, cannot travel to other provinces due to the war.”

The university aims to teach in Kurdish, Arabic, Assyrian, and English and it is using a teaching system followed by most international institutions. In response to criticism that the Kurds rushed to ‘Kurdishize’ education in their areas, Kobani University’s other co-president, Kemal Mahmoud Bisrawi, says, “we did not rush to open the university, in fact, we delayed it for years.”

The Kurdish language was not previously recognized by Syria’s central authority, as such, there are no academics that have completed their specialization in Kurdish. Here, the teaching staff of Kobani University relies on local expertise to teach. “Kurdish language and literature teachers have practical expertise that qualifies them to teach the Kurdish language and its literature,” Hassan says, he does not, however, deny that in years three and four they will need a specialized staff. So, as Hassan says, they are in contact with qualified personnel who promised to join them at Kobani to teach in the future.

Kobani University, like the universities of Afrin and Al-Jazira, has not received any international support or recognition. This poses a constant threat to the education system in Kurdish areas. The teaching staff can’t hide their anxiety about the university’s lack of recognition and justify the current situation by saying that boldness is required to move forward. “We tell them that we are working to train them to serve their community and their country, and they have not rejected it,” says Hassan.

The university did not rely on a scientific standard when choosing its teaching staff. Instead a committee chosen by the university’s administration selected staff; in cooperation with the Kobani Canton Administration and the Education Commission. Adnan Hassan, who holds a bachelor’s degree in law from the Damascus University Faculty of Law, heads the Department of Kurdish Language. His Kurdish teaching experience comes from his educational background in the Kurdish Language Institute in Kobani and Kurdish language studies at the Viyan Amara Academy for Linguistic and Literary Research in Kobani. Hassan says that the university suffers from a lack of reference materials and laboratory equipment. They also wish to secure support to open other colleges and departments, and “their persistence in following-up,” says Sakina Ali, “makes it impossible to fail.”

Rawan Hami, a student studying chemistry at Kobani University, says that she applied to the university to get her Bachelor’s of Science, and that her desire to learn outweighs any concern about the location or recognition of her degree. Hami says, “it’s enough that I feel safe in Kobani; that’s something that is missing in many other Syrian cities.” Rawwan, who earned her high school diploma in 2016-2017, says that students at the university must take courses in mathematics, physics, chemistry, English, Kurdish, and general culture. She says they still need labs and practical study tools, “that aren’t currently available.”

Acceptance of teaching the Kurdish language and opening universities in Kurdish-controlled areas remains an uphill battle. Still, Abdullah Zakaria, a student in the Kurdish Department, who also holds a literature diploma and is originally from Raqqa, says that he is happy to study at Kobani University. “I’ve fulfilled my desire to study Kurdish literature” said Zakaria.

Despite the difficulties of opening the university, Dr. Bisrawi insists that universities in Kurdish-controlled areas will eventually be recognized by international institutions. At the end of the day, instability and war in Syria stand in the way of any future project. Moving forward, the role and importance of a shared consensus among all Syrians is vitally important to begin a new stage of stability.