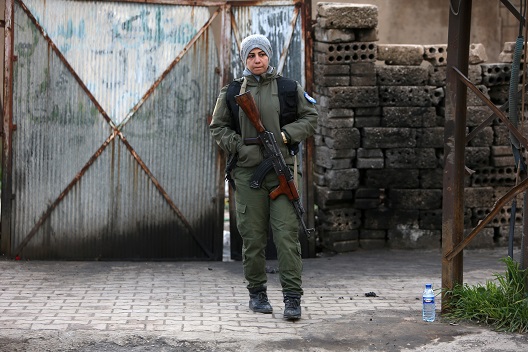 The United States has invested nearly five years and tens of billions of dollars in northeastern Syria to terminate the terrorist “caliphate” of the so-called Islamic State (ISIS, ISIL, Daesh, IS). The battle against thousands of at-large ISIL operatives continues. But for how long?

Should the United States declare victory now and turn over the land liberated from ISIL—one-third of Syria containing most of the country’s oil and agriculture—to an Assad regime whose policies and practices helped implant ISIL and other transnational terrorists in Syria in the first place? If so, what is Washington’s responsibility to those Syrians who have partnered with American military forces in the battle against ISIL? What would be the effects of an American exit on regional friends and allies?

A week before last Christmas, President Trump tweeted his desire to disengage from Syria quickly. Since then the administration—obviously with a presidential green light—has tried to modify that message. But the ultimate intent of the American commander-in-chief on Syria has not yet been articulated.

In the wake of the tweet, Kurdish “partner forces” working with the American military since late 2014 panicked and explored (unsuccessfully, through Russia) a deal with the Assad regime. Allies being recruited by American officials to help stabilize northeastern Syria posed questions (laced with skepticism) about the commitment of the United States to a long-term effort.

Indeed, the American president may either return to the urgency of his December 2018 message or simply allow American forces in northeastern Syria to draw down gradually to zero, opening the liberated territories to Assad, his allies (Iran and Russia) and possibly a resurgent ISIL.

Down and out may well be the default policy. Yet President Trump could, if he wishes, choose a different course and explain to Americans why a long-term commitment in Syria is important.

He could point out that the hard-earned victory over ISIL will be undone quickly if liberated territories lack legitimate, effective governance.

He could warn that Assad and his Iranian allies may employ, for their own purposes, some of the ISIL terrorists currently at large. Both have histories of hiring Islamist extremists. Those not hired might find considerable popular support for armed resistance to a returning regime in the pocket of Iran.

He could justifiably argue that turning the area over to Assad would deny Syrians—Arabs, Kurds, and others—an opportunity to create in northeastern Syria a political alternative to Assad state terror: government based on the consent of the governed and rule of law instead of terror and torture. Such a government could form one party for United Nations-sponsored Syrian peace talks.

He could state the obvious: that Assad rule in Syria destabilizes the region and supplies recruiting catnip for Islamist terrorists around the globe.

He could commit the United States (with plenty of help from allies) not to violent regime change, but to helping Syrians in one part of the country build a constructive alternative to a regime looting the other part. He could set the stage for real peace talks in Syria.

President Trump has, to date, said none of these things. The willingness of the United States to complete the defeat of ISIL in northeastern Syria and seal the victory by permitting locals to create a governance alternative to Assad remains, therefore, in doubt. President Trump, for all we know, may have merely slowed—not stopped—his disengagement dictum of last December.

If indeed the administration elects to evacuate northeastern Syria, surely there is a responsibility to try to minimize the dangers to those Syrians who have, for nearly 5 years, spearheaded the anti-ISIL coalition’s ground combat campaign. Dangers emanate from two sources: Turkey and the Assad regime.

Ankara has correctly assessed that the anti-ISIL Syrian Democratic Forces are dominated by the Syrian branch of the terrorist PKK (Kurdistan Workers Party). Although Turkey remains resolutely opposed to the Assad regime, it would prefer renewed Assad domination of Syria’s Kurds to a PKK statelet in northeastern Syria.

At present the United States faces two Kurdish-related challenges in Syria: negotiating with Turkey over a “safe zone” up to twenty miles deep into Syria along the Turkish border; and minimizing Kurdish political influence over the predominantly Arab sectors of the liberated northeast. These efforts would be liquidated by an American withdrawal: a decision that would minimize the ability of Washington to mediate between NATO ally Turkey and Syrian Kurds and elevate the prospect of an ISIL insurgency capitalizing on Kurdish-Arab tension in liberated territory.

The Assad regime and its allies—Iran and Russia—will also weigh heavily on the fate of partner forces following a near-term American evacuation. Presumably there would be an American effort to help soon-to-be-abandoned Syrian partners arrive at an acceptable accommodation with the regime before the United States surrenders liberated territory to it. Yet such an effort would define the word “problematical.”

Even if the regime and Syrian Kurds were to come to an agreement combining elements of amnesty, empowered local governance, and respect for basic human rights, the regime’s perfect record to date in respecting no ceasefire agreements dictates that the Kurds seek a third-party guarantor. Russia and Iran would be useless. Washington? Would a United States sprinting toward the exits be willing to intervene effectively on behalf of erstwhile partners suffering the effects (murder, detention, torture, looting, and rape) of the inevitable regime double-cross? If “yes,” why leave in the first place? If “no,” what message will be sent to future potential local combat partners?

The view here is that northeastern Syria is a valuable and relatively low-cost piece of leverage in a sustained effort to marginalize a dangerous state sponsor and practitioner of terrorism; a regime whose crimes against humanity cry out for accountability and justice; a family business completely in hock to Iran. Moreover, victory over ISIL in Syria is far from complete: stabilization and legitimate local governance are mandatory if nearly five years of effort are not to be wasted.

The task will not be easy, even for a country that was once able to implement the Marshall Plan and guide Japan and Germany to democracy. And President Trump is free to conclude that a rapid exit from Syria makes policy and political sense. If he does, however, he should harbor no illusion that binding protections for America’s partner forces can be obtained short of committing the United States militarily to their defense against Assad, Iran, and Russia.

And if he liquidates American leverage in northeastern Syria, he should do so fully understanding the implications for neighboring friends and allies. The Assad regime, for example, does not wish the return of over six million refugees. Neither can it govern in a manner preempting more refugee flows. Indeed, an efficient Assad kleptocracy precludes the kind of reconstruction funding Syria needs, thereby guaranteeing hardship for Syrians for as far as the eye can see. Moreover, the regime’s reliance on state terror will continue to inspire flight and violent opposition, including Islamist extremism.

With Syria serving as a black hole in an already politically volatile region, American support for Jordan, Lebanon, Iraq, and Turkey will require open-ended and very intensive engagement. The dire consequences of continued crime family rule in Syria are not containable inside Syria. Exiting Syria cannot, in short, mean avoiding the regional and international implications of the Assad regime’s violently corrupt system of state terror.

For President Trump, there is no middle ground: it is either all-in with sealing the victory over ISIL by facilitating a governance alternative to Assad, or all-out as quickly as possible. Treading water is not an option: an ISIL resurrection is inevitable if stabilization is delayed and tensions grow between Arabs and overreaching Kurds in predominantly Arab liberated areas.

Nothing good can come of surrendering liberated areas to the regime and its allies: partners will have been handed over to war criminals, and regional allies will suffer the consequences of American leverage for Syrian peace talks and political transition being sacrificed.

And sacrificed for what? The war against ISIL will have been wasted, and the pros and cons of future partnering with the United States will be tilted decisively and justifiably toward the latter. Sealing the victory will neither be quick nor easy. But the alternative is—or should be—unacceptable.