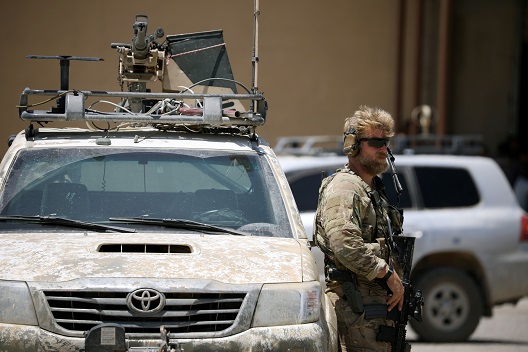 On July 19, the Trump administration decided to end the CIA program meant to arm moderate Syrian rebels fighting against Bashar al-Assad. While the CIA ‘train and equip’ program ends, the US military involvement continues through air strikes against the Islamic State (ISIS, ISIL, Daesh), and a Pentagon run train and equip program for the fight for Raqqa along the Euphrates river. Listen to Rafik Hariri Center’s Senior Resident Fellow, Aaron Stein‘s commentary on the decision and the continued US military campaign in Syria.

If you are unable to listen to the audio, please read the transcript below:

Hello my name is Aaron Stein, senior fellow at the Atlantic Council’s Rafik Hariri Center for the Middle East.

Just yesterday we had some news from The Washington Post that the Trump administration has ended a CIA-run program to arm, and perhaps train, elements of the Syrian opposition that had been in place since 2013. But they are keeping in place a secondary program run by the Department of Defense called Train and Equip—that’s largely focused on what the name implies—training and equipping elements of the Syrian opposition to fight the Islamic State. This gives us a chance to talk about my latest report, Partner Operations in Syria: Lessons Learned and the Way Forward – and it talks about this Train and Equip program.

Just to make things a little more complicated, the Train and Equip program breaks down into two sort of disparate elements—one west of the Euphrates River, where the US military has trained and equipped largely Arab majority forces with the goal of attacking Islamic state positions; and efforts east of the river where the US has created a militia called the Syrian Democratic Forces—its primary component being the YPG which is a Kurdish majority force that is now fighting in the streets of Raqqa to liberate that city from the Islamic State.

And so my report, and at least the genesis of it, was to look at largely the challenges with the US operations west of the river and why that failed—because the program didn’t do so well,  versus the tactical successes that the US has had with the SDF, beginning with the partnership that came about in October 2015, largely by accident, which was in response to the US bombing of ISIS positions around Kobane, a Syrian Kurdish town, that became sort of the genesis of what built out into the current counter-ISIS strategy.

And so my report, based upon a series of interviews with US officials, members both in the military and on the outside, looked at the sort of bureaucratic complexities involved in this. And it comes up back in this Washington Post report which is that there are two different elements in there—one run by the CIA and one run by the Department of Defense—and if you’re looking at the genesis of policy decision-making, these legalese, these sort of nitty gritty details are really important because they helped set the broader framework for how strategy is figured out and least implemented in Syria. And so you have a US position, and US history of using small numbers of boots on the ground in complicated environments, in this case Syria, backed by airpower to try and take as much territory as possible.

What makes the Syrian case so complicated is that the US is going after a symbiotic terror state nestled into a larger sort of rogue state which is led by the Bashar al Assad regime but is not willing to carry out regime change against the Assad regime, but is essentially trying to oust the Islamic State from territory it effectively governs. And in doing so, it has made a military partnership with the SDF that’s been tactically successful. That’s because, as the report describes in great detail, within these partner operation efforts that the US undertakes, the special operations forces who are involved were able to graft onto YPG networks. Because they were able to do that, they had a coherent command and control structure which allowed them to rapidly expand the amount of territory under SDF control. Whereas the efforts with the Train and Equip were problematic because the concept of operations, the goals were always too ambitious largely because we were trying to train up what was a force that didn’t really exist, culled from individuals rather than larger groups and their goals were largely incongruent with those of the United States. The fundamental problem with this, is not the defeat of the Islamic State but sometimes these intricacies and these tactics run afoul of larger foreign policy objectives—in this case the US relationship with Turkey.

Image: Photo: U.S army soldier holds a gun as he stands guard next to an armoured vehicle as Brett McGurk, U.S. envoy to the coalition against Islamic State, visits the town of Tabqa, Syria June 29, 2017. REUTERS/Rodi Said