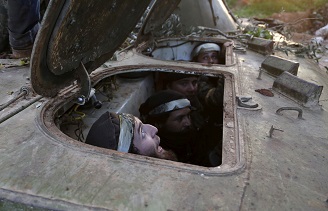 Photo: Rebel fighters from the Ahrar al-Sham Islamic Movement sit inside a BMP armoured vehicle during what they said was an offensive to take the northwestern city of Idlib, Syria March 24, 2015. REUTERS/Khalil Ashawi

The Idlib deconfliction zone created by Russia and Turkey at Sochi in September 2018 is currently subject to violations by both the Assad regime and armed opposition groups. Regime and armed opposition groups have targeted each other since February. Tension is increasing between Russia and Turkey due to these ongoing violations and ultimately over the fate of the agreement. These violations are important because of the danger they pose to the three million inhabitants in the area. If the agreement collapses and the regime mounts an offensive on Idlib, using similar tactics seen in Aleppo, it risks creating an unprecedented humanitarian disaster.

By analyzing open source reporting data on social media, I analyzed the observable trends from the data into an interactive map listed below. The map shows the dangers faced by civilians from the continuous attacks as well as the catastrophic effects of newly resumed Russian airstrikes on Idlib. I was able to verify the location of major violations and casualty figures by cross correlating reports taken from Twitter, Facebook, and YouTube to identify 139 major violations. Documentation began on February 14 lasting through April 7, 2019. The data indicated a total of 224 deaths and 263 injuries across all violations. This data set is not an exhaustive list of all violations committed by all warring parties. The data only focused on highly documented major violations.

Data collection focused on local media activists, especially those belonging to local civil councils. Larger organizations such as the Syrian Civil Defense Forces and the Syrian Observatory for Human Rights were also used for data on casualties. Collecting data on violations by armed opposition groups focused on news reporting and residents posting information on attacks.

Most violations by both sides consisted of artillery, rocket, and mortar strikes. The majority focused on towns and cities bordering the de-confliction line. The data shows the limitations of armed opposition groups, such as Hay’at Tahrir al-Sham (HTS), to project power beyond these regions. However, their attacks are still a major a threat to civilians. Rockets launched by HTS struck a hospital in Masyaf on April 7 killing five civilians. Suicide attacks from and al-Qaeda affiliate Ansar al-Tawhid and HTS also struck regime checkpoints in Masaneh on March 3 and Maharadeh on March 12 respectively—killing at least forty regime fighters.

Comparatively, regime forces can hit nearly any point within Idlib through Russian assistance. Their continual targeting of towns and cities along the Damascus-Aleppo International Highway may indicate possible routes for a future offensive on the zone.

Since March, the return of Russian airpower over Idlib province is the most dangerous development in the pattern of ceasefire violations. Numerous airstrikes targeted communities such as Idlib city, al-Latiminah, and Kafr Zita. Kafraya, previously subjected to a population transfer, was struck hard in the recent air campaign. At least thirty-one civilians were killed in these attacks which included the use of thermobaric bombs.

Thermobaric bombs, sometimes referred to as vacuum bombs, work by igniting a cloud of explosive aerosol creating a long lasting, extremely high temperature, blast wave. This is important for civilians because it not only collapses buildings—but sucks all the available oxygen out of a structure. Victims are often killed slowly by breathing in the burning gasses, suffocation, or from collapsed lungs due to the intense pressure of the shockwave. The use of such bombs was previously documented in the siege of Eastern Ghouta in February 2018 as well as in al-Latiminah in December 2017.

These attacks forced residents and internally displaced persons (IDPs) further north to camps close to the Syrian-Turkish border. These same squalid camps have been subject to recent flooding. IDPs fleeing the violence had their tents and belongings washed away by unrelenting rain—seeking shelter anywhere they could. Camp residents in Atmeh, near the Turkish border, protested against HTS after they allegedly shot and killed a local IDP camp resident for unclear reasons.

Civilians trapped in Idlib province find themselves between a rock and a hard place. Syrian and Russian attacks render most areas unlivable in the southern portions of Idlib. Life is miserable in IDP camps that have lost support from international aid organizations. HTS forces trying to maintain some sense of control are resorting to violence against civilians. Three million people live in the wider area and are at risk if the regime continues to act on regaining control of “every inch” of Syrian territory.

The key issue behind this catastrophe, and others before it, is the lack of an enforcement mechanism for the ceasefire zone. The Sochi agreement did not include a mechanism to hold any party accountable and no neutral third-party international organization is part of the agreement to oversee implementation of enforcements; if they existed. There are no easy options to protecting civilian lives in Idlib.

Turkey could intervene against HTS by using its own military forces in cooperation with its local partners—the National Liberation Front—that formerly controlled major areas of Idlib. The United States has a strong interest in supporting this plan, directly or indirectly, due to the presence of senior al-Qaeda leaders and veterans in Syria; which remain a serious concern for US policy makers. An intervention could force the disillusion of HTS—fulfilling Turkey’s obligations under the Sochi agreement.

However, an intervention against HTS presents serious risks to Turkey due to the possibility of retaliation. Its unclear how rebel groups under the HTS umbrella would react to a Turkish intervention as they dig in against an upcoming regime offensive. Turkey may find itself in a protracted military conflict with HTS. Turkey is ill equipped for this potential offensive while embroiled in its own campaign against Syrian Kurdish forces and the PKK. HTS could also conduct terrorist attacks in Turkey as retaliation—seriously damaging its tourism industry during an economic recession.

Yet, it is within Turkey and Russia’s abilities to alter the Sochi agreement in order to reflect the current realities on the ground. The HTS takeover of armed opposition-controlled territory makes the condition to expel or disband HTS now an unrealistic goal. New negotiations could focus on increasing joint military patrols between Turkey and Russia to re-open major roads such as the Latakia-Aleppo and Damascus-Aleppo highways currently controlled by HTS. Losing control of these roads would cut HTS’s tax revenue, but it may relent if the only alternative presented is a Russian-backed regime offensive.

Joint military patrols of the zone are doing little to prevent regime shelling of civilian areas. However, a re-engagement with the goals of the Sochi agreement—particularly the re-opening of major roads—could satisfy Russia and the regime for the time being. Without Russian support, the regime’s depleted ranks cannot successfully mount an offensive on Idlib. While continual shelling of the zone is taking a serious toll on civilians—the highest priority should be to avoid an all-out military assault on the zone by the regime.

Trevor Mace is an intern at the Rafik Hariri Center for the Middle East. Follow him on Twitter @Trevor_Mace_