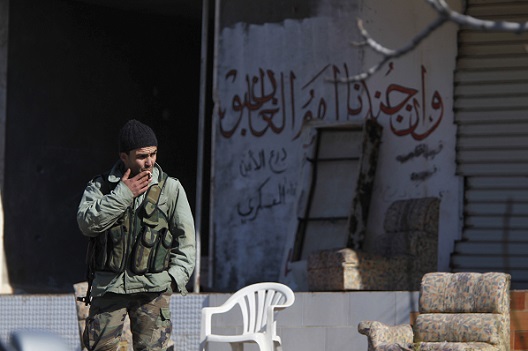 On November 3, 2012, I took a cab headed to the Lebanese capital of Beirut. I carried a light bag in preparation of repetitive searches through numerous regime checkpoints. I fled Syria because the Syrian army had drafted me for service. I choose to flee my homeland instead of fighting my countrymen.

We reached Jadeedat Artouz, the border checkpoint of Damascus province, after five checkpoints. I was supposed to report for service in four days’ time on November 7, 2012. I was afraid my name was already circulated to the Syrian border crossings. Generally, a draft dodger’s name is only circulated if his draft date passes. At the beginning of the revolution, the army granted draftees two months to appear for duty after being summoned. If they did not appear, the army would circulate their names to all Syrian border checkpoints. These rules are inconsistent at best and I did not dare allow an exit stamp on my passport. The situation has worsened since I fled. Now if the army catches a draft dodger at a checkpoint, they will force him to the battle front.

Mandatory military service has always been a burden for the Syrian male youth. University male graduates specifically had to postpone job opportunities for several months after graduation. The draft has turned into a nightmare after the revolution. The regime introduced changes to reduce the service period, but it is still troublesome. When Hafez al-Assad was in power from 1970-2001, the draft period was two and a half years. It remained much the same when his son, Bashar, assumed the Syrian presidency in 2001. In 2005, Bashar reduced the draft to two years and then to 21 months in 2008. On March 19, 2011, he reduced the draft to 18 months, when the Syrian revolution broke out against him.

The regime drafts Syrian male youth to make up for its military losses. After the revolution broke out in 2011, Assad assumed that attacking the opposition with brute force would end it. He deployed tanks, armoured vehicles, and aircrafts to the rebellious cities. The Syrian army even launched missiles and dropped barrel bombs. Yet, the prolonged war has proven to be costly to Assad’s army. According to the Syrian Observatory for Human Rights (SOHR), since the revolution broke out the regime has lost 45,385 military personnel and 29,943 members. These numbers include loyalist militias such as al-Lijan al-Shaabiyya and Kataib al-Baath.

The army has since refused to release youth from their service. Even those that complete the required 18 months are held in service. Only one lucky group was dismissed on October 1, 2011. Many of the youth drafted prior to 2011 are still in service. Additionally, conscription law states that youth who have completed their service can be redrafted in an emergency situation, such as the current war. Some soldiers have defected and joined the Free Syrian Army and other rebel groups. Soldiers have also stayed in the army, either as combatants or non-combatants. While others have fled the fighting altogether. The huge military losses in addition to thousands of personnel deserting have depleted the Syrian army’s resources from its strength of 325,000 recorded in 2009. The regime now controls only twenty-two percent of Syrian territories after several defeats in the second half of 2014. The regime launched a recruitment campaign to make up for these losses. The army recruited on-call youth and sent patrols out to draft youth in areas under its control. Some youth fled to opposition-controlled territory, or left the country. The unlucky ones, whom the army captured, were forced to serve. The regime’s desperation for personnel is exhibited by how it has resorted to emergency draft laws and conducts regular patrols to round up youth.

The regime benefits in other ways from the draft. The regular patrols terrorize people and pressures them not to protest against the regime. The regime and its officers also benefit from bribes that parents have paid in the past and continue to pay to keep sons out of service. In the second half of 2014, Ammar, a young Syrian who fled to Beirut a year ago, decided to return to Damascus to work. He was arrested in Damascus in a patrol that was searching for on-call youth. To get him released, his relatives bribed one of the officers with $500 to remove his name from the on-call list. Worried that he might be drafted again, but not seeing good prospects in Beirut, he fled to Germany to seek a secure future. Syrian laws related to conscription also further complicate these matters. Any young man who has not completed his service in the military is given a passport valid for only two years. Passports can only be renewed twice, putting his ability to travel in hands of the Syrian state. This law is used to trap youth. Combined with the recent passport requirements of neighbouring countries and the prolonged war, travel is limited for male youths. Lebanon started visa requirements in 2014 and Turkey followed suit in 2016 to regulate the flow of refugees. This makes entering both countries more difficult for youth who cannot get their passports renewed. Those who flee are more likely to turn to Europe where they can enter through a legal process without a valid passport.

Moreover, through military service, the regime is sending a message to Syrians that it is still the legitimate government and recognized by the international community. It still has legal authority over its citizens, who are obliged to comply. Young men cannot defy the government’s elaborate laws and the security personnel that enforce them. The only way young men can remain in their country is to fight on behalf of the government, even if they disagree with its policies. In this way, conscription is a tool to maintain and solidify the Baathist state in Syria.

Hasan Arfeh is a Syrian journalist based in Turkey. He currently works for Radio Rozana.

Image: (Photo: A member of forces loyal to Syria's President Bashar al-Assad smokes a cigarette in the town of Rabiya after forces loyal to Assad recaptured the rebel-held town in coastal Latakia province, Syria January 27, 2016. Syrian pro-government forces recaptured a key rebel-held town in coastal Latakia province on Sunday, building on battlefield advances in the area ahead of planned peace talks this week in Geneva between Damascus and Syria's opposition. Picture taken during a media tour organised by the government. REUTERS/Omar Sanadiki)