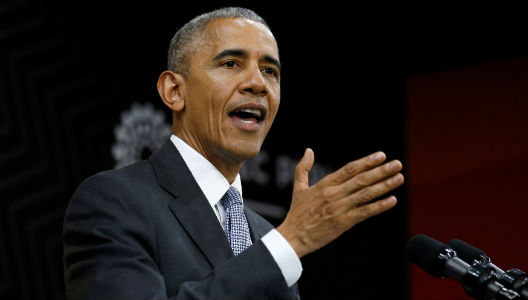 US President Barack Obama holds a press conference at the conclusion of the APEC Summit in Lima, Peru November 20, 2016. (Kevin Lamarque/Reuters)

At a recent international conference, Russian scholars triumphantly upheld their country’s role in Syria and called on the West to organize a “Marshall Plan” to rebuild Syria under Bashar al-Assad. In Peru, meanwhile, President Obama—he who has put American boots on the ground in Syria to help fight ISIS—lamented (without apparent irony) that he could never find a legal justification to act militarily in Syria. The slaughter of Syrian civilians and its policy consequences are bad enough. The narratives of those who unashamedly glorify the perpetrators and those who coldly dismiss defending the defenseless add enduring insult to an ongoing abomination. And someone will ultimately have to pay to rebuild that which has been utterly wrecked by a regime and its supporters.

President Barack Obama was characteristically direct in denouncing the destruction wrought in Syria by Russia, Iran, and the Assad regime. He described Bashar al-Assad “as a man who has decided that destroying his country, turning it to rubble, and seeing his population scattered or killed was worth it for him to cling to power, when he had the option to peacefully engage in a transition that could have kept the country intact. That’s his mentality. That’s not a mentality we support. That’s a mentality that the Russians and Iranians have been willing to support.”

A comprehensive history of the Obama administration’s handling of the Syrian crisis could devote a full, thick volume to such statements. Those of United Nations Ambassador Samantha Power will strike readers as especially eloquent and moving. Yet the chapter on Obama administration actions to complicate mass homicide and defend Syrian civilians would be brief. It would take a single page. And that page would be blank.

Why not take modest military measures to complicate and end the free ride of those deliberately targeting hospitals, schools, markets, and mosques?  “I continue to believe that we did not have a legal basis for military intervention there . . .”  This from a president who has inserted visa-free special operations forces into Syria to help fight ISIS (ISIL, Daesh, Islamic State). This from a president who explained to the American people why it was essential (and quite legal) to strike a Syrian regime that had murdered over 1,400 of its own citizens with chemical weapons, only to back down in a remarkable ritual of reputational hara-kiri. This from a president who designated the opposition Syrian National Coalition as the legitimate representative of the Syrian people in December 2012, but who elects to this day to recognize Bashar al-Assad—he “who has decided to destroy his country”—as the President of the Syrian Arab Republic.

Mr. Obama may not, however, need worry about his legacy with respect to Syria. If Mr. Donald Trump’s campaign statements on Syria are any guide to forthcoming policy, the Trump administration will merely drop the hand-wringing, empty rhetoric about human suffering and formally convey Syria to Russia, Iran, and Bashar al-Assad. If this is how President Trump decides to proceed he will only be accelerating and completing the Syria work of his predecessor. Whatever the new president may do with respect to health care, trade, immigration, alliances, and other contentious issues, the direct translation of his campaign rhetoric on Syria into action would amount to policy continuity.

Listening to Russians as they reflect a bloody-minded sense of purpose and accomplishment in Syria elicited some grudging respect. One speaker hailed Moscow’s rescue of Syria’s “legitimate government.”  He claimed that without Russian military intervention ISIS “would have marched on Damascus,” brushing aside the absence of an anti-ISIS Russian military campaign. He then ridiculed the “six member” armed Syrian opposition supported by the United States, and called on the international community to design and implement a “Marshall Plan” to rebuild Syria under the auspices of the legitimate government rescued by Russia.

Another Russian commentator was a bit more subtle. Asked about airstrikes on hospitals in Aleppo and elsewhere, he replied several times with the same formulation: “Professional military forces do not target hospitals.”  Literally speaking, this was not a flat denial of such Russian Air Force targeting. Neither was it a denial of Assad regime atrocities from the air. But neither speaker had anything to say about the relevance of international humanitarian law to the conflict in Syria. Indeed, one blamed rebel forces for allegedly using hospitals as military headquarters. No evidence was offered to back the assertion.

At the very least, Russian scholars have no problem upholding the bold leadership of President Vladimir Putin while mocking the West, and Washington in particular. As Russia seeks to break American alliances and relationships in the Middle East and beyond, Syria is a gift that keeps on giving.

The one potential downside for Russia in Syria was articulated in the reference to a “Marshall Plan” for the country’s reconstruction. He who called for the undertaking helpfully noted that much of the work could be done by China and India (“it would be a lot cheaper”) and should exclude “former colonial powers,” references perhaps to France and Turkey.

It is one thing to deliver emergency humanitarian aid to those who need it, irrespective of who controls what politically. Indeed, the United Nations has been diligent about delivering aid to regime-controlled populations even as the regime denies it permission to break sieges elsewhere, and even as the regime conducts mass homicide. Reconstruction, however, will be something else entirely.

If Russia and Iran succeed in propping up the Assad family and entourage in all or part of Syria, international financial institutions and potential donors would be dealing with a family business; not a government. That business has earned, over the years, a certain reputation with regard to probity, stewardship, integrity, and financial performance generally.

That reputation is documented in encyclopedic detail. Shareholders, taxpayers, and other stakeholders in an enterprise that might require hundreds of billions of dollars to implement will want solid reassurances about the nature and capabilities of the host government. Russia knows its client, his family, and his entourage quite intimately. For all the Russian rhetoric about governmental and state legitimacy, it knows that the Assad regime resides more in the discipline of criminology than that of political science. Indeed, Russian diplomats can be more descriptive than their Western counterparts about the bottomless corruption and limitless incompetence of the family business. Neither are Iranians unaware of the basic facts.

Clearly Moscow and Tehran aim for a decisive military victory in Syria, one that keeps Bashar al-Assad in power for as far as the eye can see, notwithstanding Assad’s recruiting value to ISIS and the like. They may well succeed, particularly in a context of effective American acquiescence, irrespective of fancy rhetorical wrappings. Perhaps Russia and Iran would be content to see Damascus become Pyongyang on the Barada. But this could be dangerous for their long-term interests. What they should prudently plan on instead is being the principal donors for the housing, public facilities, and infrastructure reconstruction of Assad’s Syria, including refugee resettlement. They can hire, if they wish, Chinese and Indian companies to do the work they pay for. They should begin budgeting for it now, just in case the West facilitates a quick military victory.

The family business would eliminate the usual suspects from Syria’s reconstruction. Russia and Iran have helped their client break the place. The least they can do is join him in owning it.

Frederic C. Hof is director of the Atlantic Council’s Rafik Hariri Center for the Middle East