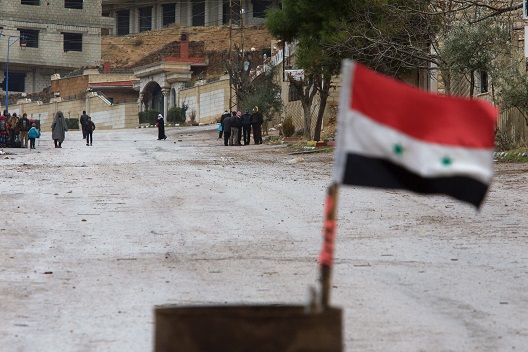 (Photo: Reuters. A Syrian national flag flutters near residents who said they have received permission from the Syrian government to leave the besieged town as they wait with their belongings after an aid convoy entered Madaya, Syria, January 14, 2016. Aid was sent on Thursday to the Syrian town blockaded by pro-government forces and two villages besieged by rebels for the second time this week, and a U.N. official said he hoped to make more deliveries to areas where people are starving. Dozens of trucks left Damascus for the town of Madaya at the Lebanese border, and the two villages of Kefraya and al-Foua in rebel-held Idlib province. Tens of thousands of people have been trapped in the areas for months. REUTERS/Omar Sanadiki)

Over the past two years, the Syrian regime and its allied militias have persisted in using starvation as a weapon against opposition areas. Madaya, which only recently became the focus of media attention, is only one of over 40 other areas that has reached a state of crisis due to regime siege tactics, according to Siege Watch, a joint initiative of PAX and The Syria Institute. The tactic is used to return rebel-held areas to, as the regime’s media describes it, the “bosom of the homeland.” The regime has deprived  areas of Homs’s old city, Yarmouk camp, Barzeh, al-Qabun, Qudsaya, and Hama of food, medicine, and clean water, forcing opposition forces to hand over the remaining rubble and emaciated bodies so that the regime can declare victory.

Moadamiya lies only four kilometers from Damascus’s city center. It is strategically important because it is overlooked by the 4th Armored Division’s mountain base. There are three settlements for military and security personnel in the surrounding vicinity, and Mezzeh military airport is located nearby. Even more importantly, the city shares a border with Darayya—the city that, over the past three years, the regime has been unable to seize.

The regime resorted to besieging Moadamiya after several attempts to storm the city. The residents began demonstrating against the regime early on during the revolution due to economic grievances: the regime had nationalized and seized land owned in Moadamiya to build housing for military and security personnel. Residents protested, saying that the regime appropriated the land without providing any compensation or remuneration to its owners. The regime responded to the demonstrations with force. On 24 October 2012, forces affiliated with the Republican Guard and the 4th Armored Division killed at least 27 people, according to the Syrian Observatory for Human Rights, with local sources putting the number much higher. On 21 August 2013, the regime returned, striking Moadamiya and several surrounding areas with chemical weapons and killing 1,429 people according to a US government report.

Following these attacks, and particularly after international threats about the use of chemical weapons, the regime partially opened the crossings into Moadamiya. Many residents seized the opportunity and left the city, leaving it nearly empty. A few of the city’s residents and some of the rebel fighters along with their families stayed behind, only to be trapped when the regime again besieged the city. Residents became so desperate they resorted to eating grass. On December 25, 2013, the city signed an agreement to end the fighting and begin ceasefire negotiations. As part of the agreement, the city would raise the regime’s flag in exchange for opening the crossings and ending hostilities. Negotiations would continue on other points until a broader agreement was reached. However, no progress has been made.

According to Ameenah Sawwan, a Syrian researcher and activist from Moadamiya, “The first thing the regime did after the truce was signed was return those residents of Moadamiya a that fled to Damascus and its surroundings to their city, in exchange for not arresting them. This brought the city’s residents to 45,000 people, up from only 6,000 civilians before the ceasefire.”

Despite the truce, the regime’s checkpoints imposed taxes on anything the residents tried to bring into the city, either for their homes or shops. They even taxed bread, so that those who controlled the checkpoints took home large sums of money and caused an appalling rise in prices. As a result of repeated attacks and consistent harassment, the residents decided to demonstrate against the regime when Syrian television visited the city. In response, the regime again besieged the city, trapping 45,000 civilians, including 6,000 children under the age of 12.

The Muadamiya al-Sham media center stated that, as a result of the blockade, food supplies and consumable goods have been completely depleted. The besieged residents have resorted to searching for food in the garbage to survive, the same fate of besieged residents in Madaya. The media center added, “The disaster that we have long warned of has, in fact, begun, following the death of five people—among them children—from starvation within twenty days.” They have called for “immediate action by international organizations to break the blockade and to bring in food aid. If they do not do so, 45,000 civilians will be condemned to die from starvation, the cold, and shelling.”

Those besieged live in a state of extreme fear; they fear losing their children and see them die before their own eyes, while they remain helpless. A doctor at the field hospital in Moadamiya confirmed that, because of the lack of medicine, the hospital is no longer able to provide treatment, including for those that arrive daily suffering from malnourishment. The doctor added, “We are only capable, now, of providing first aid.” He has also confirmed that the regime’s forces have prevented the extraction of patients in critical condition and those suffering from chronic illnesses. According to al-Hajj Abu Khaled, a local resident, “The situation is utterly despicable. People have reached the point of psychological collapse and surrender as they watch their children die. No one ever imagined this would occur in Syria, a country usually filled with blessings—or, as the old Damascene expression says, ‘No one dies of hunger.’”

Fear, sickness, and hunger have prompted residents to negotiate again. A new round of negotiations has begun, in which the regime and Hezbollah forces appointed a media personality, Rafiq Lutf, rather than a government official, to head its negotiation committee. The residents perceive this as an insult meant to provoke them, a message that the residents of Moadamiya do not deserve to engage in dialogue with a more capable representative.

The regime’s condition for ending the siege is full surrender: rebels must surrender their weapons, fighters and their families must go to Idlib, young men must surrender themselves to perform compulsory military service, and the residents must give up individuals wanted by the regime. The residents of Moadamiya demand the lifting of the blockade and the release of prisoners.

The regime has coupled the blockade with barrel bombs in the south of the city. There, elements of the Free Syrian Army face a severe shortage of ammunition. The regime soldiers, backed by four tanks and a Russian mine flail, are working to remove the dirt barriers that the rebels put up between Moadamiya and Darayya. The negotiations have gone back and forth without any developments, while besieged residents continue to starve.