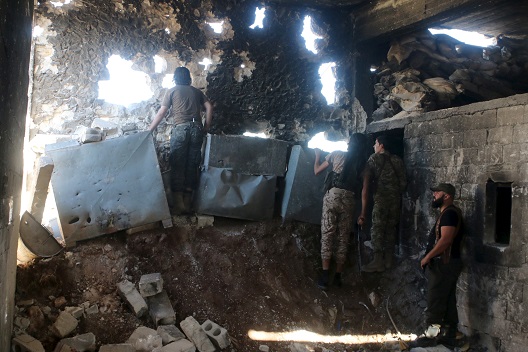 Since the Syrian regime’s forces seized control of the city of Aleppo, a significant conflict has emerged between opposition groups in the areas of northern Syria. Extremist groups are clashing with moderate groups over military and ideological issues, and many of these forces have split into two main camps. One, called Hay’at Tahrir al-Sham, is comprised mostly of Islamist groups, and is under Fateh al-Sham’s leadership. The other, more nationalist project, is connected to Ahrar al-Sham.

In the midst of these developments, it is noteworthy that the Nour al-Din al-Zenki Movement was one of the groups to join Hay’at Tahrir al-Sham. The Zenki Movement was once considered a moderate group, and was one of the strongest factions within the Free Syrian Army fighting in and around Aleppo. Meanwhile, another prominent group in Hay’at Tahrir al-Sham is Jabhat Fateh al-Sham, which is classified as a terrorist group. Despite historical tensions between the Zenki Movement and Jabhat Fateh al-Sham, the Zenki Movement joined the alliance as a result of a long-term shift in their approach, which has been underway since members of the Friends of Syria Group stopped providing assistance to the Movement in early 2015.

The Nour al-Din al-Zenki Movement was one of the oldest groups in the Free Syrian Army. It was founded in the countryside of Eastern Aleppo in late 2011, under the leadership of Tawfiq Shahabuddin. It played a prominent role in the fight against the Islamic State, helping to expel the Islamic State from the city of Aleppo in 2014. The Zenki Movement also participated in multiple operations to combat Syrian regime forces. Its combatants are estimated to number about 7,000.

The recent shift in the Zenki Movement’s ideology and alliances raises many questions about the reasons behind it, particularly because the Zenki Movement is considered one of the most organized groups in the Free Syrian Army (FSA); it has a Shoura Council as well as specialized political, military, administrative, service, relief, and medical offices, all of which employ specialists, politicians, officers, and graduates.

According to observers, this shift may have begun when the Zenki Movement joined the Army of Conquest, an Islamist coalition organization, in order to fight Syrian regime forces in Idlib. In late 2016 in Aleppo, fighters from the Zenki Movement launched an attack against the Fastaqim Union, a large opposition armed unit and member of the Free Syrian Army. By attacking Fastaqim, Zenki seemed to taking part in efforts to eliminate FSA units even though Zenki’s leaders say they are members of the FSA, an accusation often leveled at al-Qaeda linked Nusra Front.

Even before the Zenki Movement announced its merger, it was clear that several of its combatants had been killed when the US-led international coalition bombed one of Jabhat Fateh al-Sham’s training camps in Atarib, a city in the Eastern Aleppo countryside.

Hussam Atrash, a leader and legal official within the Zenki Movement, attributed the merger with Hay’at Tahrir al-Sham to “foreign intervention, which prevented moderate groups from uniting, and made them easy prey for the forces of the Syrian regime and its allies.”

“The movement started out open to working and uniting with groups in the Free Army,” Atrash said, explaining that armed opposition groups needed to merge to fight the regime. “There were many negotiations about uniting with groups in the Free Army in Aleppo and Idlib such as the Suqur al-Ghab Brigade, 13th Division, Northern Division, and others, but the response was always that they weren’t able, because the MOM operations room and countries that supported them refused.” The MOM, or Musterek Operasyon Merkezi in Turkish, is the Turkey-based joint operations center that countries supporting the opposition use to channel supplies to opposition groups.

For a while, the Zenki Movement received support through the MOM. However, this support stopped when the Zenki Movement merged with other groups in Aleppo, on the grounds that it had not consulted with MOM members prior to the merge.

“We gave up our hope in groups of the FSA, so we turned to working with the Ahrar al-Sham movement, a moderate Islamist group that adopts the demands of the Syrian revolution and upholds the slogans of the revolution,” the Zenki Movement’s leadership added. “When we asked to join Ahrar al-Sham, they refused, justifying their decision by saying that they’re pursuing a comprehensive project.”

Atrash revealed numerous attempts at a merger and many meetings with prominent military leaders from Aleppo-based groups like the Jaysh al-Mujahideen, the Sham Legion, and the Army of Islam. These attempts all failed, however, because, according to Atrash, the groups had no real desire to act, and external pressures prevented some of them from joining together.

Hassan Asbro, a military officer who defected from regime forces, said that, in the context, “It would not be surprising for the [Zenki] Movement to join an alliance with Islamist brigades, given that the international community has stopped supporting the moderate opposition with weaponry.” Asbro adds that, “Opposition fighters felt disillusioned when the regime took control of Aleppo, after having believed that the international community would not allow any side of the conflict to defeat the other. They started searching for any means to make a strong alliance in which they could join together. Since many supporters’ conditions prevented them from doing so, Zenki and other movements found no one who would form an alliance with them, other than groups with an Islamist approach. This was especially true as these groups had become the most powerful ones on the ground.”

Asbro believes that groups in the FSA will devolve and be eaten up one after the other if supporters of the Syrian revolution do not create a strong united entity that is actively supported with more than just food provisions.

Since the Assembly for the Liberation of Syria announced its formation earlier this year as a response to negotiations in Astana arranged by Russia and Turkey, several opposition military forces have joined this alliance. After a segment of Ahrar al-Sham’s fighters joined, it became the largest force in northern Syria.

Meanwhile, a prominent military commander of Sultan Murad, a faction within the FSA, downplayed the importance of Hay’at Tahrir al-Sham. He considers it something “temporary, to fend off the regime’s next attempts to advance towards Idlib.”

One commander, who preferred to remain anonymous, said that the Zenki Movement joined many other alliances in the past, including the al-Jabha al-Shamiyya, the Jaysh al-Mujahideen, and others, only to quickly abandon them. The commander assessed that this is largely attributable to Sheikh Tawfiq Shahabuddin, the Zenki Movement’s leader, who is well known for his desire to remain independent.

The Northern Army, based in the countryside of Northern Aleppo, was previously one of the most important brigades in the Zenki Movement. However, Jaysh al-Shamal announced its split from the parent group after the latter declared an alliance with Jabhet Fateh al-Sham.

It seems that until opposition groups join together to create a national army, and until they are given real, effective support on the ground, there will be no major changes to the map of military opposition forces. This is especially true given that forces from the US-led international coalition, along with Russia and the Syrian regime, continue to conduct aerial attacks on Jabhat Fateh al-Sham’s camps in Idlib and Aleppo, without finding a political solution that would end and punish the Syrian regime’s crimes against civilians.

The international community is not addressing Assad’s oppression of the opposition, but is instead only focusing on combatting Islamist groups by conducting strikes against them. Until now, this approach has not achieved stability in Syria, and given the many failed attempts at a ceasefire, it is unlikely to do so. With the continued failure of negotiations and attempted ceasefires, Syrians have largely lost hope that the international community can produce a political solution or even stop the bloodshed.