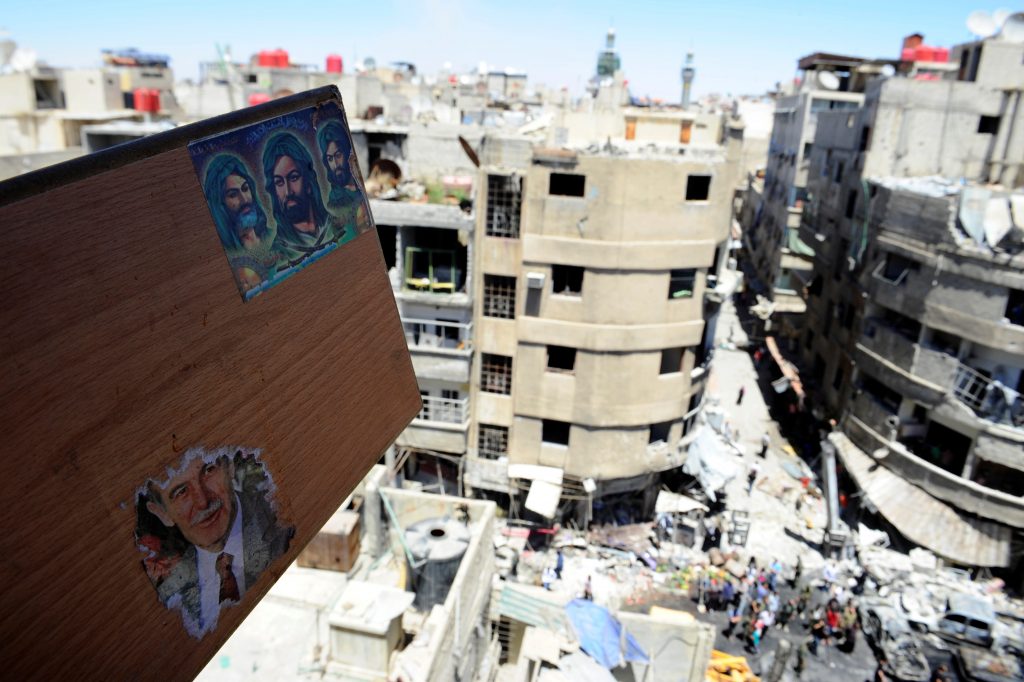 PHOTO: A wooden plank with pictures of former Syrian President Hafez al-Assad(L), father of President Bashar al-Assad, and a picture of Shi'ite Imams Ali, Hassan and Hussein over a damaged site after a suicide and car bomb attack in south Damascus Shi'ite suburb of Sayeda Zeinab, Syria June 11, 2016. REUTERS/Omar Sanadiki

This month marks the sixteenth anniversary of the death of Hafez al-Assad, a man who built the foundation of Syria’s civil war and still influences its course today. He had supported his Alawite sect along with other minorities to secure their support for him and as a counterweight to the Sunnis, showing favoritism towards those who supported him. Over time, the Alawite sect found itself entangled with the regime in a strained relationship of mutual survival.

On June 10, many local websites and newspapers marked the occasion, recalling the most prominent massacres Hafez al-Assad committed as president of Syria, such as the Tel al-Zaatar massacre in June 1976, when his forces and Maronite militias led by Pierre Gemayel besieged the Tel al-Zaatar Palestinian refugee camp in the North of the Lebanese capital Beirut, as well as the Palmyra prison massacre on June 27, 1980 following a failed palace assassination attempt at the hands of his exiled brother Rifaat al-Assad. His most infamous massacre was the February 1982 Hama massacre of the rival Muslim Brotherhood. Al-Assad’s forces killed between 10,000 and 30,000 people during a siege of the city, hitting it with mortars and airstrikes, then entering it to stifle any resistance. These massacres alienated the Sunni sect while Hafez al-Assad tried to paint himself and his regime as protectors of the minorities. The Muslim Brotherhood, predominately Sunni, strengthened the divide by intensifying the rhetoric against the Alawites and denouncing the sect as infidels.

Prior to Bashar al-Assad, Hafez al-Assad attracted the support of many minority youth, especially the Alawites, to ensure the continuation of his regime. The minorities depended on the regime’s protection, while the regime depended on their support, turning into an inescapable relationship of mutual survival. The minorities could not abandon the regime out of fear of extremist Sunni organizations’ reactions, which is what ultimately determined the number of army and government defectors during the civil war.

Hafez al-Assad moved many members of the Alawite sect from the rural coast to the capital of Damascus, where civilization, power, and money thrived—though a significant number of Alawites remained in the mountain and coastal villages—while simultaneously moving the largest heavyweight families far from the confrontation. The most prominent of these families were the Jadid family and the al-Ali family, from which stems Saleh al-Ali, the Alawite militant from Tartus.

Families close to the Assad clan were capable of building gigantic empires of wealth and influence, and it is they who have benefited throughout all phases of the Syrian crisis. Perhaps the most prominent of these families is the Makhlouf family, who remains very close to the Assads. The most recognizable of them is Rami Makhlouf, Bashar al-Assad’s uncle’s son. He owns major companies in Syria, notably the Syrian communications company “Syriatel” and the Syrian Holdings Company. Most companies that import cars into Syria are either owned by Makhlouf or are in partnership with him, as is, perhaps most importantly, Cham Wings Airlines.

There are other families that control the country’s key business interests, including the Mualla, Kherbek, and Mohanna families, all of whom come from Qardaha and its surrounding areas—Hafez al-Assad’s birthplace. Aside from the al-Assad family, other family mafias, such as the Shalish and Jaber families, have transformed Qardaha into an area where Syrian constitutional law has no influence. There are also dozens of Alawite villages throughout Jableh and Tartus countrysides that live without basic services or facilities, their residents suffering from extreme poverty. The poverty of these areas helped the regime build-up its military base, since the Alawites viewed the army as a means to improve their livelihoods. Also, many of them were not able to pay a fee (or bribe) required to avoid military service. On the other hand, the largely Sunni middle class viewed the army as inferior, and were able to pay their way out of military service. Over the past years, young Alawites became involved in security positions that provided them with a decent salary and level of authority, with the percentage of officers and Alawites in some branches occasionally exceeding 90 percent. Nowadays, because of the high numbers of military members, each coastal city displays a large tablet with the picture and names of the Alawite officers and agents that were killed in battles with the opposition, with these tablets updated on a near-daily basis.

Similarly, Bashar al-Assad was able to turn the Alawites into armed pro-regime militias. They found that the money and influence they received from serving the regime would improve their status, and bring them out of the impoverished and backwards state in which the elder al-Assad had left them. Armed militias that carried weapons for revenge against the opposition are now referred to as “Shabiha,” a term that has become widespread.

The relationship between the regime and Alawites has developed to the point where some Alawites prioritize preserving the regime over their country. One example is Suheil al-Hassan, an Alawite officer who is said to have invented the explosive “barrel bombs” that war planes and helicopters drop on civilians and cities in opposition-controlled neighborhoods, thus saving Bashar’s treasury tens of millions of dollars on rockets and other weapons and leading to the death of thousands of civilians.

The number of Alawite homes without family members killed or disabled in the coastal cities and villages is diminishing. The situation in Syria is now a civil war in which the remains of Assad’s regime feed off the sectarian tensions and their effects. Such was the case in the latest bombings of Jableh and Tartus, when an outburst of anti-Sunni slogans was permitted amongst the Alawites, and each Sunni living in the coastal cities became a suspect, regardless of whether he was a supporter or an opponent. The case of a soldier captured by an Alawite militia during the bombings is a clear example. The soldier was accused of being a terrorist, but it was later revealed that he had been fighting with the Syrian army. The Al-Alam News Network aired an interview with him in which he explained the sectarian rhetoric and method that was used to demean him and turned him into a potential terrorist.

The Alawites now live in an atmosphere of sorrow at the current situation. Many of them lament how the homeland has been reduced to the person of Bashar al-Assad in recent years. They understand the suffering that has spread through Syria and see that Bashar has brought Syria to ruin. On the other hand, the opposition does not provide a political vision or try to win over this community, despite the fact that they must live together in the future and the existence of prominent Alawites such as Monzer Makhous within the opposition’s political ranks.