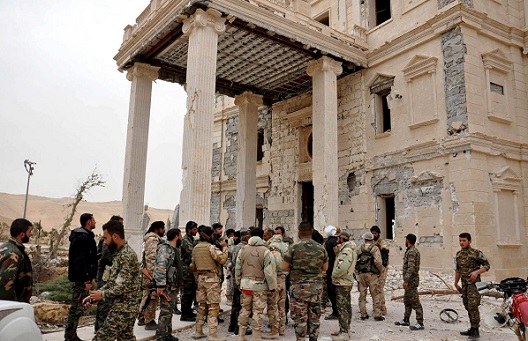 The news would have been immeasurably better had the American-led anti-ISIS coalition enabled Syrian nationalist forces opposed to ISIS’ premier enabler—Bashar al-Assad—to liberate Palmyra. It would have been far better had the town been liberated by an American-led coalition-of-the-willing ground force. But no. Those who now possess Palmyra are those who lost it and made eastern Syria safe for ISIS in the first place.

Russia and the regime have, at long last, turned their attention to ISIS. Moscow’s aim is to drive Washington into an anti-ISIS working relationship with he who President Barack Obama once told to step aside. The administration has been warned about this potential humiliation for months on end. To say it is always a step behind on Syria is to give it undue credit. It is no wonder that Russian President Vladimir Putin had fulsome praise for the Syria policy of his American counterpart after recently meeting with Secretary of State John Kerry.

Killing ISIS “cabinet members” one-by-one is good. Using Kurdish militiamen to hassle ISIS on the ground has its merits. But it has been totally insufficient. Leaving the butchers of Paris and Brussels free to do their worst has been beyond regrettable. And now Messrs. Putin and Assad are poised to capitalize. It is past time for Mr. Obama to delegate the requisite authorities for a decisive move to be mounted quickly against ISIS in Raqqa and everywhere else it exists in Syria.

Image: Photo: Forces loyal to Syria's President Bashar al-Assad gather at a palace complex on the western edge of Palmyra in this picture provided by SANA on March 24, 2016. REUTERS/SANA/Handout via Reuters