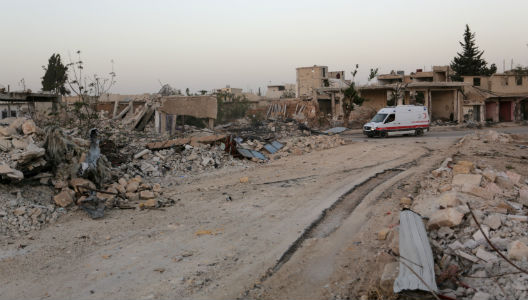 In a hospital ICU room in Aleppo, with doctors all around me, I tried to open my eyes after a series of surgeries on my stomach and legs. I could see the fear and pity in their eyes. This is how they treat all of their patients; despite their personal tragedies, their hearts still have kindness for all of the injured.

We exchanged looks as I gathered my strength and tried to speak. It was as if the words were refusing to come out of my mouth. Was it a side effect of the anesthetics or was it the fear of what they might tell me? It wasn’t important. I gathered my strength and the first thing I could say was, “Strange… where’s Khaled? I don’t see him! Is he okay?”

I didn’t get an answer. They stood without saying a single word. I tried to gather an answer from the expression of their eyes, but couldn’t.

One of them answered me, “He is okay, but… he’s injured.”

I blacked out for a few minutes and woke up again. “Guys, for the love of God, let me know about Khaled. Why are you standing next to me? I’m well. I’m fine. Go check on Khaled, please.

After that, I gathered from their conversations that Khaled’s injury was severe and he was fighting for his life.

I would rather be cut into a thousand pieces rather than hear such news.

With my tired imagination, I began to replay the painful scenarios I had lived.

I remembered the tragedy of when I lost another friend—Trad—may God rest his soul.

Trad was the dear friend who had accompanied me for three years of the revolution. He was always with me, just as a shadow follows its owner, or like a soul with its body.

We were close, inseparable companions in this war. I thought we would live together and die together.

All these painful details came back to me because Trad had also been wounded by shrapnel to the head, fighting for his life for about a week before he died. May God have mercy on him.

His death was the biggest personal tragedy I had ever suffered. It was as though I had lost a part of myself; despair filled my life.

And then, Khaled came into my life and lifted up my spirits. We bonded in a similar way to how Trad and I had—companions in this war, completely reliant on each other. My friendship with Khaled filled the hole in my heart that had emerged when Trad died.

Khaled is now experiencing what Trad had experienced, may God have mercy. They were similar even in their injuries—both suffering shrapnel to the head.

I struggled with the thoughts and memories in my bloodied head. Will I face the same tragedy? Will I again lose a part of myself?

The doctors decided we should leave Aleppo for Turkey to complete treatment.

That day, there was only one road connecting Aleppo to the outside—Castello Road.

On a daily basis, the road would incur heavy shelling and sniper attacks.

The ambulance drove quickly on the dirt path adjacent to Castello in order to avoid the shelling.

This is what life is like for paramedics in my country. At every moment, they are risking their lives to save those of others.

The tire blew out and I fell from the stretcher more than once; pain shot through me each time.

However, it was not the pain of my body that was hurting, but my concern for the wounded in the other ambulance.

Will Khaled live? Or will he die, leaving me alone with only my memories?

We arrived at the Syrian-Turkish border, entered into Turkey, and were then transferred from hospital to hospital until we were able to settle in one.

I remained this way until the news I had been dreading came.

My God, how hard it was to hear those words. It was more difficult than being buried under the rubble—more painful than my physical wounds. I felt as though I had died as well.

Those who have lost one dear to them will understand. What I felt was beyond descriptions of pain and sadness. It was like time stood still.

This is how I was killed a second time. Dear readers, it was not the type of death where the person is buried in the ground. Losing those most dear to you is like dying yourself, like being buried alive.

That is how I felt. Dead but still alive.

Hadi Alabdullah is an independent media activist and journalist in Syria. In 2011, he left nursing school to participate in the peaceful protests of Homs and began his new career: reporting stories from the front lines in Syria. Hadi is prominent peaceful activist and has become an icon with his persistent ideas of hope and unity. He is the winner of the Reporters Without Borders 2016 Press Freedom Award.

First published in Arabic on August 24. Translation by provided by Nada Hashem.