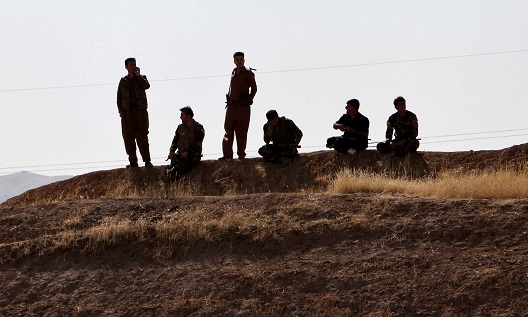 Iraqi Kurds have lost control over the disputed city of Kirkuk after Iraqi central government forces and Iranian-backed militias retook the territory this October. This happened not only after the Iraqi Kurds’ controversial referendum for independence, but also after the two sides finished joint operations against the Islamic State (ISIS, ISIL, Daesh) in Mosul. The United States, the Kurds’ main backer, did not step in to support their allies, leaving the Kurds questioning Washington’s commitment.

In Syria, Kurdish-led forces drove ISIS militants out of their caliphate’s self-proclaimed capital, Raqqa on October 17. The Syrian Democratic Forces (SDF), dominated by Kurdish forces and backed by the United States, declared Raqqa liberated and ready for its post-ISIS operations. However, with the United States still operating without a post-combat plan for northeastern Syria, and with enemies of the Kurds—Turkey, Iran, and the Assad regime—continue to make advances from west and south, the question of whether Washington will protect their Syrian Kurdish allies in the long run is significant to the calculus of Kurdish political survival in the war-torn country. This question is amplified after the United States did not support the Kurds in Kirkuk, what some have described as a betrayal.

The US-Kurdish Alliance in Syria

The Syrian Kurdish People’s Protection Units (YPG), which is the military wing of the Kurdish Democratic Union Party (PYD), came to prominence after it began to fight ISIS in parts of northern Syria, and further once the United States chose it to be its local partner in the fight against the terror group. The relationship between the United States and the YPG consolidated during the Battle for Kobani in September 2014. Although disturbing its relationship with Turkey—a NATO member and who considers the YPG a terrorist group because of its linkages to the Kurdistan Workers Party (PKK)—the United States sought an effective partnership with the YPG with the sole aim of fighting ISIS.

While the cooperation has led to successful advances against ISIS, the United States has, willingly or not, empowered the Kurdish force to gain a semi-autonomous authority in its areas of control. In October 2015, the YPG joined with several Arab and tribal forces and formed the SDF, but it remains the dominate component and command of operations. The United States strategic relationship with Turkey has been damaged due to Washington’s support of the YGP under both the Obama and Trump administrations. Nevertheless, the alliance the United States made with the Kurds in Syria is tactical and has thus far focused only on countering ISIS. Now, with much steeper challenges ahead with the group moving further into non-Kurdish territory, it remains to be seen whether the United States will stand by the YPG.

The expansion of the YPG was not only possible because of American support, but also because of the weakness of other players in the Syrian conflict. Enemies of the YPG are re-emerging and the upcoming challenges are significant. In this particular chapter, a clear answer from the Trump administration on the US commitment appears essential to the YPG.

Ultimately, Turkey wants the demise of the YPG in Syria and the assurance that no Kurdish autonomous territory will be established on its southern border. From August 2016 until March 2017, Turkey executed Operation Euphrates Shield, which successfully prevented the YPG from connecting its Afrin enclave in the northwest with the rest of its controlled territory in the northeast. Today, Turkey is currently moving into Idlib in the northwest, with support from Arab opposition forces and in coordination with Russia and, by extension, the Assad regime. It seems, at this point, Ankara aims to attack the YPG in Afrin. The United States, in this aspect, would not likely be able to deter Turkish operations near Afrin because it has no troops in the area. Last year, Turkish warplanes targeted YPG positions in the Kurdish canton and the United States was unable to provide protection. Russia, instead, brokered a deal to deploy a small contingent of its forces to Afrin that acted as a shield to prevent Turkish escalation. However, Russia’s position is likely changing as Moscow forges deals with Ankara on the side. Moreover, the United States is losing influence in the northwest to the Turks and the Russians. None of this is good news to the Kurds.

The other area where the YPG and the United States faced Turkish objection was at the initiation of the Raqqa operation, at which Ankara aimed for a prominent role and hoped to deter YPG expansion near the Euphrates. Now with Raqqa fully liberated from ISIS, the question of post-ISIS governance is in place. The fear of Arab-Kurdish conflict in Syria is increasingly possible as Kurdish forces continue to move into Arab-majority cities and towns. This fear was exacerbated by YPG fighters raising a large banner of imprisoned Kurdish PKK leader, Abdullah Ocalan, in Raqqa’s central square after liberation. While the YPG announced that it will hand the ruling of the city to a civilian council it founded with the United States in April, this council is challenged by another formed by the Arab opposition of the Turkey-backed Syrian Interim Government. The fact that a Turkey-backed council is founded to rule in Raqqa hints at Ankara’s intentions to secure influence in the liberated area.

Which ever council ends up governing, it will be geopolitical competition that determines the city’s fate, not the residents and their needs. Additionally, with no ISIS to unite the various factions and their international backers, the ground is fertile for ethnic conflict.

The Syrian Kurds, and by extension the United States’ remaining leverage in Syria, are also under increasing threat from a re-emerging Assad regime whose forces and those of its allies have made significant advances in the last few months. At a time of weakness, the Assad regime accepted the fact that the Kurds in the north have gained a de facto authority, and has cautiously avoided operating in an active conflict with the YPG.

However, the Assad regime today has regained control over much of its former territory, thanks to Russia, Iran, and Hezbollah. Most recently, pro-regime forces moved through central Syria towards the east, racing with the US-backed SDF forces to reach oil-rich Deir Ezzor governorate. The Assad regime’s ultimate goal is to control all of Syria and, sooner or later, the YPG will find itself in confrontation with pro-regime forces.

The Assad regime can predict from the US reaction to Kirkuk’s fall to Iraqi and Iranian-backed forces that it can act aggressively against Syria’s Kurdish militia with no consequence. The Syrian Kurds cannot be compared to the Iraqi Kurdish Regional Government (KRG) in terms of capabilities. The KRG may have lost Kirkuk but it could resist further escalation from the central government without being dependent on the United States. The YPG, on the other hand, if it came under attack without US protection, could lose much or all that it has gained in the past few years.

The Trump administration now seems to be considering increased military involvement in Syria and Iraq to counter an Iran, which could lead to continued US support for the Kurds. However, any action or strategy from the Trump White House may come too late, in large part because it has yet to form a coherent strategy for Syria and Iraq.

Furthermore, the Russians are bringing Ankara closer to Damascus, and Turkey seems to be coordinating well with Russia in Idlib. It should come as no surprise if Turkish and regime interests converged to both eliminate the Kurds’ political future in northern Syria and end what remains of American weight in the country.

It is unclear, at this point, what the Syrian Kurds may have planned for surviving post-ISIS. What is clear is that hard choices have to be made. The United States continues to lack a strategy, and when the time comes, it seems improbable that Washington will get into a fight with Turkey for the YPG. Turkey is vital for any settlement of the Syria war, and right now Ankara is finding Moscow more ame­nable to work with than the United States. To secure its survival, the YPG needs to reconsider its rapid growth and to look at rightsizing its aspiration in the context of the country’s overall political reality. The United States’ reliance on the Kurds in Syria has hurt Washington’s influence in the country by causing it to lose influence with other forces in the country and damaged its relationship with Turkey. It has also hurt the YPG by making them overly dependent on the United States and hurting their relations with other local groups by allowing them to pursue their ambitions and offend other groups.

Abdulrahman al-Masri is a journalist and analyst who focuses on Middle East politics and security and foreign policy. He is also a fellow at The SecDev Foundation. Follow him on Twitter at @AbdulrhmanMasri.