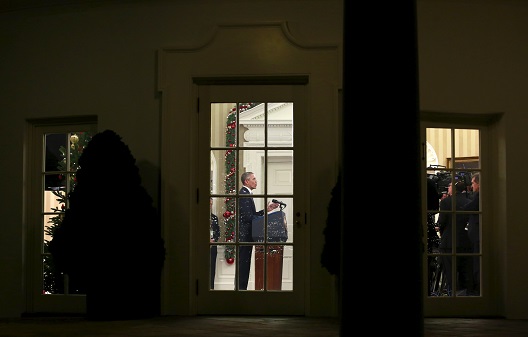 On Sunday evening, December 6, President Barack Obama attempted to assure Americans that he is applying the right array of tools to keep the citizenry as safe as might reasonably be expected from terrorism in a country featuring easy access to military-grade weaponry and a tiny percentage of the population willing to commit mass casualty assaults. Early in his remarks he said something both factually correct and vitally important for his policy approach, “So far, we have no evidence that the [San Bernardino] killers were directed by a terrorist organization overseas…” Yet if they had been, would he have proceeded with a by-the-numbers defense of his current strategy of attrition toward the Islamic State (ISIL, ISIS, or Da’esh) in Syria, where the November 13, 2015 attacks in Paris were planned? How much time is he willing to grant ISIL in its Syrian headquarters to design and implement additional operations in Europe and perhaps North America?

For an administration with 13 months and 13 days yet to run, the mother of all catastrophes would be a mass casualty event on American soil orchestrated by ISIL from its headquarters in Raqqa, Syria. Not only would the president find himself pressured and perhaps obliged to put American ground forces in Syria to close with and kill an organization that has imposed itself on a restive Syrian population, but he would be brutally exposed to the simplest of questions: If what you have lacked from the beginning of this conflict is a credible, professional ground force to eliminate the Syrian side of this ISIL pandemic, what exactly have you and your national security team done to try to build a coalition of the willing among regional and European states?

The correct answer would be devastating: nothing. For administration officials it suffices to conclude—even post-Paris—that no one would be willing to contribute “boots on the ground” so that a decisive military operation against ISIL in Syria could be mounted. Absent a no-holds-barred American diplomatic offensive, they are right. Who, after all, would have the appetite to commit forces to a ground campaign against ISIL in central and eastern Syria if the United States is AWOL? Who would be inclined to put infantry, armor, artillery, and combat support units into Syria with no American “skin in the game?” Secretary of State John Kerry suggested a few days ago that regional powers ought to play an enhanced combat role against ISIL. Soon thereafter his aides had to clarify to reporters that what the secretary really meant to say is that indigenous forces ought to do more. How much time do we think we have before the next outrage?

President Obama is aware of the political peril lurking in the possibility of a terrorist incident in the United States stained with the fingerprints of ISIL in Syria. What is his preemptive defense? “We should not be drawn once more into a long and costly ground war in Iraq or Syria. That’s what groups like ISIL want.” Is this statement not susceptible to challenge? Who is “We?” Has the effort been made to build the requisite coalition? Why would air-ground operations aimed at liquidating ISIL in Syria be long and costly? Do ISIL leaders and foot soldiers really wish to fight military professionals?

The president continued, “They know they can’t defeat us on the battlefield. ISIL fighters were part of the insurgency that we faced in Iraq. But they also know that if we occupy foreign lands, they can maintain insurgencies for years, killing thousands of our troops, draining our resources, and using our presence to draw new recruits.” Here Mr. Obama implicitly conflates Syria—where ISIL is an imposed, brutal, and unwelcome presence—with Iraq, where it is part of an insurgency that came back to life courtesy of the corrupt, Iranian-abetted sectarianism of ex-Prime Minister Nouri al-Maliki.

In sum, according to President Obama, “The strategy that we are using now—air strikes, Special Forces, and working with local forces who are fighting to regain control of their own country—that is how we’ll achieve a more sustainable victory. And it won’t require us sending a new generation of Americans overseas to fight and die for another decade on foreign soil.”

According to this statement, extracting ISIL from its headquarters and killing it in Syria would take “a new generation of Americans” a decade to accomplish. Can this possibly be true? Assume it is. How long, then, will it take to defeat ISIL in Syria through air strikes? Throw in fifty special operations forces here and a hundred there. How long? Train and equip local forces in sufficient numbers to engage ISIL fighters successfully. How long for them to prevail decisively? If it would take the most powerful, capable military force on the planet a decade to put paid to ISIL in Syria, how long would it take for Mr. Obama’s approach to bear fruit? How much time do we think we have?

None of this is to suggest that ISIL in Syria is having an easy, carefree time of it. Air strikes take a toll. Special operations raids will sting. But the ability of this monstrosity to maintain a state-like structure on the ruins of a polity that Bashar al-Assad destroyed with the help of Iran and Russia is a big part of its appeal to damaged, disaffected Sunni Muslims around the world, including two in San Bernardino. Why it remains unimportant—especially in the wake of Paris, November 13—for the Obama administration to try to build the ground force coalition that could excise this cancer from Syria and spur its remission in Iraq is a mystery. The phony caliph and his minions would welcome this kind of deadly, decisive intervention? Perhaps this proposition should be tested.

The combination of excellent intelligence and superb law enforcement may well prevent an ISIL planned and executed attack on American soil during the 13 months and 13 days left to this administration. Our European allies may also be spared. We may all benefit not only from protective professionalism, but from good luck as well.

But with ISIL free to operate in Raqqa and the balance of eastern Syria, aided every day in its recruiting efforts by Assad regime atrocities fully endorsed by Russia and Iran, time may be on the side of no one but ISIL. President Obama did well to try to assure the American people that they need not be paralyzed by fear. He would do better by focusing on two paramount needs: protecting Syrian civilians from Assad regime ISIL-abetting mass murder in the western part of the country; and building a professional ground force coalition to kill ISIL in the east and give moderate Syrian governance a chance in a large part of the country. Presumably the United States would move in this direction if ISIL strikes the homeland. Why wait?

Image: (Photo: Reuters. U.S. President Barack Obama speaks about counter-terrorism and the United States fight against Islamic State during an address to the nation from the Oval Office of the White House in Washington, December 6, 2015. REUTERS/Yuri Gripas)