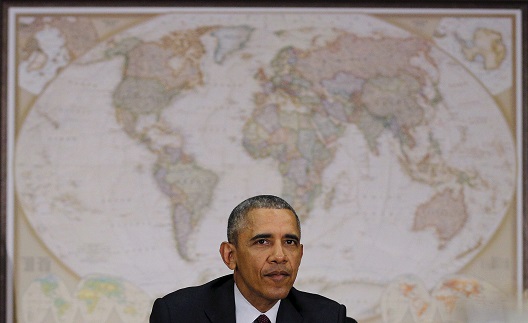 Jeffrey Goldberg’s interviews with President Obama as recorded in The Atlantic shed additional light on how the president has processed the multifaceted challenges presented by Syria. Employing the time-honored principle that the best defense is a good offense, the president described his September 2013 chemical weapons red-line reversal as a source of pride: a rejection of “conventional wisdom,” “the machinery of our national security apparatus,” [and the] “Washington playbook.” He upheld the appropriateness of speech without accompanying action, and dismissed the notion that Russian President Vladimir Putin was emboldened to take actions in Ukraine and Syria—actions that, in any event, “fundamentally misunderstand the nature of power” —by lessons drawn from the red-line episode.

Coming through strongly in the Obama-Goldberg interviews is the sense that the president is very much the analyst-in-chief. That he is thoughtful and temperamentally conservative is obvious: characteristics that any country would be fortunate to find in its chief executive. Being disinclined to reach for military options as the default response, knowing that the United States cannot fix every humanitarian catastrophe and international dispute, demanding that allies and partners step up to plate—these are all characteristics one prays will be found in the brain and character of Mr. Obama’s successor. For a president, however, linking words to action is important.

Clearly what galls the president is criticism—much of it Syria-centric—of the gap some see between his words and his actions, and the potential implications arising therefrom. The argumentation he employs to try to neutralize the criticism may be sufficiently misleading to persuade the critics that they really are onto something; that they have indeed identified the shortfall that may darken the legacy of one of the most thoughtful and reflective of men ever to occupy the presidency.

President Obama’s central argument is that he sees and understands things that elude the foreign policy cognoscenti and national security glitterati. Who knows: historians decades from now may credit a man who arrived to the Oval Office with no particular background or experience in foreign affairs for having deep-sixed “foreign policy orthodoxy” in ways that redounded to the longterm benefit of the United States. They may, on the other hand, judge that he acted recklessly and unwisely by substituting his own judgment for those in the administration, in Congress, and elsewhere whose grasp of foreign policy may have been firmer and more rooted in pertinent experience than his own.

The red-line incident was critical, and the analysis thereof contains the essence of the president’s argument. Vice President Biden warned that “big nations don’t bluff.” Secretary of State Kerry declared that militarily punishing a murderous Syrian dictator would be “directly related to our credibility and whether countries still believe the United States when it says something.” When she learned of the president’s decision to call off air strikes and refer the matter to Congress, National Security Advisor Susan Rice “argued that the damage to America’s credibility would be serious and lasting.” What all of these officials had in common, according to the president, is that they were wrong.

Having had dozens of red-line conversations over the past two-and-a half years with senior officials and diplomats representing countries allied to the United States, this writer can testify that those who warned the president about the necessity of follow-through were correct. Interlocutors seeking to understand the dynamics underlying the president’s decision were less interested in the intricacies of Syrian policy than in the value of their own mutual defense arrangements with the United States. The advice bestowed on visitors was one derived from a habit of home team loyalty formed over decades of public service: Syria is a problem from hell; it is a one-off policy conundrum; please do not draw any broad negative conclusions about the state of your country’s alliance with the United States.

Ideally no American ally has drawn such a conclusion, although one fears some have. What conclusions may have been drawn by Russia’s Putin? Here the president has a facile reply: if Russia invaded Georgia “on [President George W.] Bush’s watch, right smack dab in the middle of us having over 100,000 troops deployed in Iraq,” how can anyone in his right mind argue that the red-line reversal was key to Putin’s assumption of impunity in taking Crimea? How would willingness to use force be a factor? Mr. Obama expressed puzzlement that anyone would argue to the contrary.

Is it wholly inconceivable that Mr. Putin moved with impunity against Georgia precisely because the United States was bogged down in the quagmire of Iraqi insurgency? Is it really unreasonable to conclude that Putin saw nothing in his American counterpart’s Syria performance that would give him pause in snatching Crimea? Indeed, what will Mr. Putin now make of a gratuitous presidential comment that Ukraine’s non-NATO status will always make it subject to Russian military domination?

Perhaps recognizing that the ‘Putin is deaf, dumb, and blind’ argument might not carry the day, President Obama then shifted gears and archly observed that Russia was demonstrating weakness in invading Ukraine and deploying military forces to Syria. “Real power means you can get what you want without having to exert violence.” Leave aside the fact that this formulation raises the question of what the United States has wanted in Ukraine and Syria and what the results say about American power. Simply preface the president’s words with “Surely Herr Hitler realizes” and one has a reasonable facsimile of what Western statesmen were saying in 1938. History tell us how Hitler reacted.

As he has done consistently during the course of the Syrian crisis—both with officials and outsiders—the president caricatured the views of his critics. He complained that critics say, “You called for Assad to go, but you did not force him to go. You did not invade.” To the best of this writer’s knowledge no one counseled invasion; no one argued that the president is “obliged to invade the country and install a government…” Surely the president knows this. Surely he realizes that whatever he thinks he can gain now with this fallacious tactic will not survive the scrutiny of history.

In the specific case of the red-line climb down, the president (who did not list fear of offending Iran’s Supreme Leader among the alibis) cited his belief that a missile strike would not have eliminated the Assad regime’s chemical weapons and that Assad would have survived, “claiming he had successfully defied the United States.” Indeed, had the strike been minor and symbolic in nature it would have been as bad as the climb down itself in harming American credibility and emboldening Assad to double down on mass homicide.

Yet had it laid waste to Assad’s air force, field artillery, Scud missiles, and rockets, the strike would have emptied Assad’s victory speech of substantive content. Yes, the chemicals would have remained in place, and perhaps so too the Assad regime. But instruments of mass terror would have been neutralized, the migrant crisis afflicting Europe might have been averted, and tens of thousands of people now dead would still be alive. Assad’s chemicals killed a tiny fraction of his victims. Making him a party to a chemical weapons agreement gave him a sense of impunity encouraging him to return to mass homicide at industrial levels. The results—compounded recently by Russian intervention—have been a humanitarian abomination and a migrant crisis that roils and divides Europe while submerging Syria’s immediate neighbors.

Those reading the interview will be struck by incautious, gratuitous presidential commentary about allies and partners. He complains about “free-riders” and observes that allies rarely take the lead and depend too much on the United States.

And yet when Washington elected in 2012 to be AWOL in the large-scale training and equipping of Syrian opposition units, who took the lead? Who stepped up to the plate? Who did the heavy lifting? Are we pleased with the results? Are we happy that sectarian primitives now figure so prominently in Assad’s armed opposition? And why does the president persist in claiming that the people we could have organized, trained, and armed were all hapless civilians: unarmed protesters handling AK-47s for the first time? Were there not decades of universal conscription in Syria? Were there not thousands of defectors from the Syrian Army?

In the case of Libya the president engaged in rare (and self-serving) self-criticism, saying he erred “because I had more faith in the Europeans, given Libya’s proximity, being invested in the follow-up.” Why would this have been a matter of faith? Did he not ascertain—or ask the Department of Defense to ascertain—that there was a civil-military stabilization plan in place? Surely the president realized that the difference between success and failure in Iraq in 2003 was not the invasion per se, but the absence of such a plan: a stunning act of negligence that would doom the occupation, fuel an insurrection, and create the pathway to the Islamic State (ISIS, ISIL, Daesh).

There is much in this interview that will provide President Obama’s successor with food for thought. Indeed, there may be some lessons learned.

For the President of the United States gambling is permissible; but bluffing is not.

Building relationships of trust and confidence with allies and partners is at least as important as reaching out to enemies and adversaries.

Refusing to make the absence of the perfect—such as a quick, clean military solution to a problem from hell—the enemy of the good: in the case of Syria, complicating the ability of a mass murderer to do his worst, thereby saving livings and preempting massive refugee flows.

Employing rhetoric carefully and sparingly, following where possible the old Maine adage that “Nothing improves on silence.”

And—as a subset perhaps of trying to know what one does not know—not assuming that the contents of one brain, however impressive, outweigh the accumulated knowledge of foreign policy practitioners who have done real things and learned, sometimes the hard way, real lessons.

Image: Photo: U.S. President Barack Obama attends a meeting with the National Security Council at the State Department in Washington February 25, 2016. Obama on Thursday expressed confidence that the United States would prevail in its fight against the Islamic State, but said that an end to the conflict in Syria would be key to dismantling the group. REUTERS/Carlos Barria