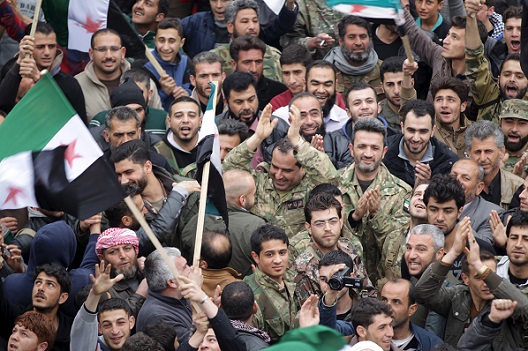 Anti-Assad protests are back all over Syria as the second week of the ceasefire starts. The opposition territories saw more than 100 protests, with protestors waving revolution flags and calling for freedom. The largest numbers of protests was in Idlib province, where Friday witnessed protests across province. The southern city of Busra al-Harir also saw peaceful protests, which turned into ‘festivals’ calling for the ouster of Assad. The city of al-Dameer in central Syria had one of the largest protests.

In spite of the armed opposition’s weakened situation after the Russian intervention, most military commanders joined the demonstrations. Numerous leaders of armed groups participated in the protests in Maaret al-Nu’man in the eastern Idlib suburbs, including Lieutenant Colonel Ahmed Saoud, commander of the 13th Division of the Free Syrian Army (FSA). “The regime is rethinking its position and gathering its strength during the ceasefire. We are also regrouping. My participation in this protest is a clear sign that the main task entrusted to us is protecting peaceful protestors during times of peace and war. These innocent people demanded the Assad’s departure. There is no way around that,” said Saoud.

“We support and the respect the ceasefire. Our presence among peaceful protestors is a key proof of this position. The regime, on the other hand, is full of lies, deceit, and hypocrisy. It does not respect any international resolutions. We are trying to prove to our allies, the Friends of Syria, that we are true to the ceasefire and will not spare any chance for peaceful or military action to oust the Assad regime,” he added.

Lieutenant Colonel Saoud was not the only one to join the protests. The commander of the al-Firqa al-Shamaliyya (The Northern Division), Fares Bayoush and Hossam Salama of Ahrar al-Sham participated, as did a number of the southern commanders in the Busra al-Sham protests. “The FSA is enthusiastic about the return of the peaceful activities, where FSA commanders are fully participating, as a key sign of the ongoing Syria revolution,” said Osama Abu-Zeid, the legal consultant of the FSA. He added that the return of the peaceful protests, even under violations of the ceasefire, enhances the legitimacy of the revolution, and that the five years of war did not prevent the Syrian people from taking to the streets once they were able.

The city protests saw wide participation from the Syrian elite, including groups like the city intellectual youth association. Women joined the protests as well. From my conversations with them, it seems everyone is looking forward to next Friday’s protests, which will mark the fifth anniversary of the Syrian revolution.

Alaa, a fighter from Latakia suburbs, had to stop fighting because of his economic needs, and went to Idlib to look for a job. After Friday prayers, he was stunned by the numbers of protestors, which he said increased by more than a thousand within five minutes. The protestors started chanting “Long live Syria, down with Assad.” Alaa said, “After the Russian intervention, my morale collapsed and I believed that the revolution was definitely in ruins. However, today, I assure you that we are determined to proceed.” He gestured with his hand saying, “Either victory or martyrdom. The ceasefire is a temporary halt of the war. But Assad has been trying to crush our voices for four years. I do not believe the ceasefire will last for long because we are still raising our voices calling for Assad’s ouster,” he added.

The local residents wish that time would go back five years so that they can raise their voices again in protest. As Abu Omar, a resident of Jisr al-Shughour in his sixties, described it, the residents pray that the echo of these protests is louder than the sound of bullets. He suffers post-traumatic stress and is terrified by the sound of bullets and hovering jets, which make him shiver and cry. I saw him dancing to celebrate the return of the “festival”, which he called the freedom festival.

He said that he wants to protest, but he still suffers from trauma since the 1980s when Hafez Assad perpetrated what is now known as the Hamah massacre to repress opposition. He adds that he could not participate in the 2011 protests as the city of Idlib was under the tight grip of the Assad fighters, but he wishes to see his country free before he dies.

Syrians in the streets were happy that the fighters joined them in the protests. Insaf, a mother of three youth, with one fighting with the FSA, says she fears the regime will strike back. “I would be absolutely thrilled if my son joins the peaceful protests, but he firmly believes that the regime is a traitor. He prefers to protect civilians from Assad’s bullets. I am out here for myself and on behalf of my sons. We will not spare any effort in using this ceasefire and every occasion to highlight our demand [that Assad step down],” she said.

The Syrians are carefully monitoring the situation, which had positive security impacts in the opposition-controlled areas, including allowing more working hours for all residents for the first time in four years. However, most believe that the ceasefire will not hold, due to the renewed voices calling for Assad to step down—something which the Syrian president will not like. Syrians worry that this will be a repeat of what happened five years ago. When the protests started, Assad used all weapons he had available, including internationally banned weaponry, to silence any voice calling for his departure.

Though many Syrians feel that Assad will not tolerate the continued protests, and they previously did not expect the international negotiations to succeed, they did not hesitate in seizing this chance to demand their freedom. The Syrians will continue their peaceful protests in the coming days, even though many believe that the ceasefire’s days are numbered.