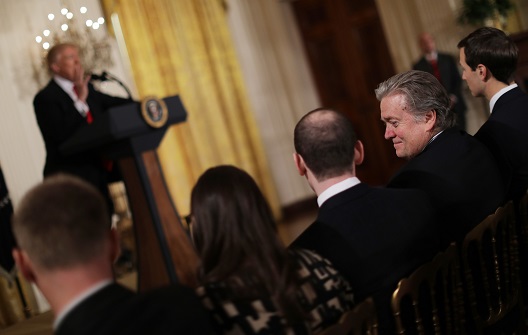 One-for-three isn’t bad in baseball, but to claim ISIS (ISIL, Daesh, Islamic State) is the enemy of Russia and the Assad regime is to parrot the Kremlin’s false propaganda line. Were Miller better prepared he might have added Iran to the ISIS faux enemies list. Or perhaps the deletion was deliberate. But even as is, the Miller statement must not be the position of the United States.

The ISIS fake caliphate and the Assad crime family have had a mainly live-and-let-live relationship ever since the successor to al-Qaeda in Iraq—the recipient of longstanding Assad regime support—established itself in Syria east of the Euphrates River in 2013. ISIS in its heyday and Assad on the ropes needed one another desperately.

ISIS relied on regime war crimes—inflicted disproportionately on Sunni Muslims—to recruit disaffected and dysfunctional youth to its ranks from around the world. Assad needed the flamboyant and highly publicized violence of ISIS to portray himself as the relatively civilized alternative. The main target of both ISIS and Assad was any Syrian posing a third way alternative to two viciously criminal and collaborative entities.

None of the above is a state secret. But even if it were, the intelligence community would happily brief Mr. Miller and his boss on the mutually profitable relationship between ISIS and the Assad regime. Indeed, that community could do much more. It could detail Russia’s nearly total avoidance of ISIS as a military target during the entire length of its military intervention in Syria, starting in September 2015.

It would tell Mr. Miller that Russia has instead targeted the real opposition—unarmed and armed—to its client Assad. And if this White House finds the American intelligence community not credible, it could consult with the Department of Defense and learn that the anti-ISIS military campaign has been waged almost entirely by an international coalition led by the United States and featuring a Syrian Kurdish militia ground force.

Just as is the case with other normally collaborative criminal organizations, the Assad regime and ISIS have sometimes come to blows over money. They have squabbled over oil and antiquities. But the relationship of these loathsome entities has, in the main, been profoundly collaborative.

The Kremlin, of course, has labeled all non-regime Syrian parties—even the endlessly courageous White Helmet civil defense organization—as extremists and terrorists. It, the regime, ISIS, Iran, and al-Qaeda elements have targeted those parties relentlessly. All this is known in detail by senior American officials. All of it should be known by President Trump and Mr. Miller. So why are the latter two adopting Kremlin talking points?

Conventional wisdom suggests that legal and political difficulties are inspiring the president to re-focus the nation’s attention on campaign promises centered on ending overseas military commitments and building a wall along the border with Mexico. Conventional wisdom is usually correct; it may well be so this time.

And yet the president’s snap decision to undo nearly five years of military effort in Syria by failing to complete and seal the victory over ISIS produces echoes of the disastrous July 2018 Helsinki Summit. There President Trump adopted the Kremlin line by praising Russia’s “cooperation” against ISIS: an utter falsehood. Was Mr. Trump trying to change the subject then? Or did he find himself fully in synch with the Kremlin’s objectives in Syria?

Post-Helsinki the president found his desire to leave Syria to Russia and Assad complicated by one salient fact: Iran’s Syrian presence as the principal prop holding aloft the Assad scarecrow.  And Iran in Syria is a major threat to the security of Israel.

No doubt Putin—eager to see Americans gone from eastern Syria—sought to assure the president in Helsinki that Russia would secure Israel from Iran in the west. Senior administration officials, seeking to fill presidential pockets thoroughly picked in Helsinki, built a list of Syria-related objectives and a strategy centered on facilitating Iran’s eventual exit from Syria.

President Trump now wishes, in effect, to return to Helsinki and do what the Russians had hoped he would do: evacuate eastern Syria and let Iranian-commanded militias swarm over areas liberated at great cost from ISIS to reestablish an Assad brand that is catnip for Islamist extremists. Vladimir Putin has applauded his friend “Donald’s” decision. Well he should. If the decision is implemented it will be a breathtaking victory for Moscow, Tehran, Assad, and ultimately ISIS or ISIS 2.0.

It is perhaps no wonder that Mr. Miller excluded Iran from his list of supposed ISIS enemies to be set free to finish off the fake caliphate. It may not have been a simple mistake. He should know that if his boss’ decision is not walked-back, Iran will be the biggest winner, courtesy of President Donald Trump.

And it will be only a matter of time before undisciplined, Iranian-led foreign fighters and revenge-seeking Assad regime operatives manage to midwife in eastern Syria either the resurrection of ISIS in its current form or in the shape of something even more impressively lethal than that which remains alive and breathing militarily. Russia, as Secretary of Defense James Mattis has suggested, is no friend of the United States. Signing on to its Syria endgame does not protect Americans or serve American interests.