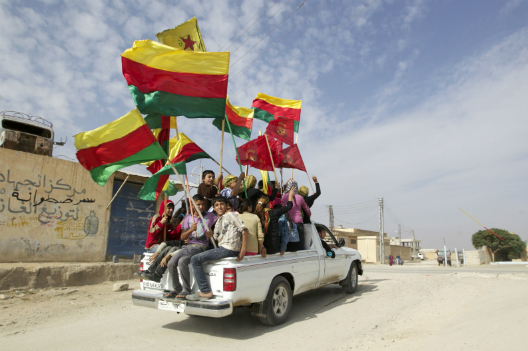 The Syrian Kurdish Democratic Union Party (PYD) is an influential actor in the Syrian conflict. Yet the PYD was excluded from recent peace talks in Astana at the request of Turkey, who jointly backed the negotiations with Russia and Iran. Turkey designates the PYD as a terrorist organization due to its ties to the Kurdistan Worker’s Party (PKK), and is likely to push for the exclusion of the PYD from the upcoming talks in Geneva as well.

Russia, however, may prove to be a counter-balance: a new constitution for Syria, drafted by Russia, includes greater autonomy for Kurds and proposes changing the name of the Syrian Arab Republic to simply the Syrian Republic. For its part, the United States has previously called for the PYD’s participation in talks and is dependent on the People’s Protection Units (YPG), the military arm of the PYD, to form the core of its anti-Islamic State proxy force. To better understand the significance of the party’s role in future talks and any potential political resolutions, it is useful to look at the its track record of governance in northeastern Syria.

Chatham House recently published a report on the PYD search for legitimacy through its self-proclaimed governance of the “Rojava” region (Western Kurdistan), from which Syrian government forces withdrew in 2012, leaving control to local militias. The PYD had already established itself in the region under Damascus’ rule, and was able to strengthen its position post-revolution, in part due to its pragmatism: it gained local support by espousing the political platform of the PKK, but stood out among the anti-regime opposition by showing its willingness to negotiate a non-aggression pact with the regime. Thus, when the government pulled out of Rojava, it handed over control of some Kurdish-majority areas to the PYD. The party’s coexistence with the regime has damaged its credibility among the broader Kurdish and Arab opposition movement, but it has also allowed the PYD to become the dominant Kurdish political party in Syria and provide relative stability in Rojava. The PYD relies on three governance factors to maintain this stability and legitimize its rule: the provision of security, public services, and public diplomacy.

The success of the PYD in its fight against the Islamic State (ISIS, ISIL, or Daesh) and protecting the local civilian population from ISIS, established its legitimacy both at home and abroad. The armed branch of the PYD, the YPG, are seen by the United States as the most effective force on the ground in combatting the Islamic State and leading the Syrian Democratic Forces (SDF), an alliance of armed opposition groups backed by the United States and its partners in the counter-ISIS coalition. Major YPG triumphs on the battlefield, such as retaking Kobane from ISIS in 2015, have bolstered the Kurdish cause and increased Kurdish support for the PYD. Minorities targeted by ISIS, such as the Yazidis and Syriac Christians, see the YPG as essential to their survival, further contributing to the PYD’s validity. Even Arabs, who are wary of the PYD’s cooperation with the Syrian government, its political aims, and human rights abuses by the YPG, appreciate the overall security the PYD provides in Rojava. Many Arab residents of cities besieged by the Islamic State have fled to the relative stability in northeastern Syria as a result of the PYD’s rule. It is noteworthy that the further an area is from a specific security threat, the less favorable the local opinion of the PYD. The party is respected more for its military success than its political goals.

The provision of services is another legitimizing factor for the PYD. The PYD dominates the Democratic Autonomous Administration (DAA), a structure of local governance systems comprised of local councils and assemblies. The DAA provides public services including education, jobs, healthcare, electricity, water, and sanitation. It is also instrumental in reconstruction projects in areas cleared of ISIS militants. Funding for these services is supported by taxes and fees, but is largely derived from the region’s natural oil and agricultural resources. The effective and relatively efficient delivery of these services creates a dependency on the PYD and bolsters its claims to credibility. Local actors, especially in Arab-majority areas, complain that the PYD restricts groups outside the party from involvement in the DAA for this very reason. International actors, too, are made to go through the DAA to deliver aid, a policy that some activists assert is meant to portray the DAA – and by extension, the PYD – as the primary service provider. Through strategic maneuvering, the PYD has created a demand for itself in the Rojava region.

To further legitimize itself, the PYD has a well-developed global communications and advocacy network through which it publicizes its success in the provision of security and public services. Through traditional and social media platforms, the party engages in image management to link its governance to popular causes like women’s rights, democracy, pluralism, and environmental sustainability. It also provides education about Kurdish causes. These social movements are generally well-received around the world—with the glaring exception of Turkey—and Rojava officials have diplomatic offices in Berlin, Moscow, Sweden, and other European capitals. Meanwhile at the local level, some Syrian Kurds express concern that the PYD does not represent all Kurds, while non-Kurds feel that the party does not represent them at all. The PYD is stuck in a balancing act between international and regional interests.

Despite challenges in proving its legitimacy, the PYD has established itself as the main governing body in Rojava. US officials under the Obama administration argued that, as a major political player and a powerful fighting force against ISIS, the PYD ought to be included in peace talks. Including the PYD in peace talks will be necessary to have them buy in to any final agreement, and ensure that a diplomatic solution addresses Kurdish, Arab, and Turkish concerns; however, detractors feel that including them will add to their legitimacy and solidify their control over their territories in northern Syria.

Emily Burchfield is an intern at the Atlantic Council’s Rafik Hariri Center.