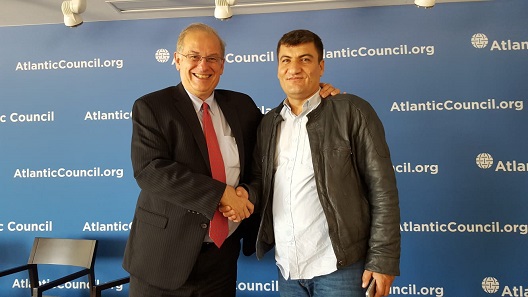 For days I’ve been trying and failing to write something about the violent and unjust passing of a good man—Raed Fares—and his colleague, Hammoud al-Jneid. In nearly eight years of witnessing Syria being eaten alive by a rapacious regime and by criminal sectarian “rebels” supported by regional states, nothing has been more demoralizing and deflating than these murders. Those who admired Raed Fares and saw in him the future of Syria now must choose: Permit all hope and effort for a successful, peaceful revolution to follow him and his colleague into the grave; or allow the example of Raed Fares to inspire renewed and unceasing work to bring about the Syria for which he gave his life.

Raed Fares was a stubborn man. He opposed as best he could the Assad regime’s survival strategy of militarizing and sectarianizing the Syrian Revolution. Indeed, he gave his life pushing back against alien, un-Syrian behavior. But he faced a regime willing and eager to shoot peaceful protestors while emptying its jails of violent Islamists so that Fares and his colleagues could be replaced by easier enemies. And he confronted the sustainment of those Islamists by regional powers unconsciously, but decisively doing the work of Assad. Although Raed Fares was far from alone in trying to protect Syrians from a criminal regime and from those who compounded the criminality in the name of opposing Assad, he could not, in his lifetime, overcome the weight of sheer evil and its many facilitators.

For Raed Fares, humor was often his most effective weapon. This confounded the Assads and Baghdadis of the world: It was something they neither possessed nor understood. Yet is was something they justifiably feared. And although the proponents of state, Al Qaeda, and Islamic State of Iraq and al-Sham (ISIS) terror had means of physical compulsion at their ready disposal, they were unable— until recently—to bring those means to bear against the man whose warm, open humanity threatened them most profoundly.

To the extent there was deliberation behind the murder of a man who represented the best characteristics of a people famous for generosity, good humor, diligence, creativity, fair play, and innovation, it was probably this: Raed Fares is less dangerous dead than alive; the threat of an inspiring martyrdom is, given the multiple blows to the Syrian Revolution, less than the threat of this man’s continued presence among the living; and killing him may prove to be the final blow for those demanding rule of law and civil society in a country dominated by Iranian-commanded militias propping up a crime family and by Islamist murderers and thieves also supported by outsiders.

Fares’ humor was also directed at times at what has sadly passed for the West. One of his more famous video skits depicted—as hilariously as possible given the horrific circumstances—a soulless, hollow West telling the Assad regime, in effect, “You may slaughter as many defenseless Syrian civilians as you wish, provided you do not do so with chemical weapons.”  What Raed Fares discovered— if he did not know it already—was that the “leaders” of the West were as immune to humor as Syria’s torturers from within.

It is tempting and comforting to say that the sacrifice of Raed Fares, Hammoud al-Jnein, and countless others will someday result in a Syria worthy of those sacrifices. This is a temptation to be resisted, because saying it is easy and devoid of meaning. These deaths are intended, by perpetrators and beneficiaries alike, to close the book once and for all on Syria’s peaceful revolution. That book will indeed be closed indefinitely if Syrians inside Syria and around the world— along with their non-Syrian supporters—see the deaths of these brave men as the final blow. In very practical terms Raed Fares still lives; he is with us so long as his example motivates our continued effort to bring forth the Syria he represented.

Frederic C. Hof is a nonresident senior fellow at the Atlantic Council’s Rafik Hariri Center for the Middle East.