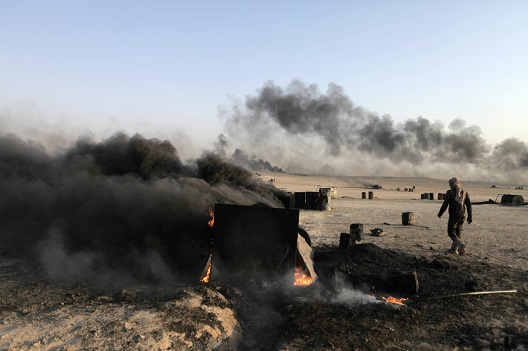 Since establishing its headquarters in Raqqa, Syria, in 2011, the Islamic State (ISIS, ISIL, Daesh) has introduced its own brand of governance, infrastructure, and business. Now entering its sixth year in Raqqa, ISIS has largely solidified its primary means of acquiring income, the majority of which include criminal and illicit activities. Like terrorist groups before it, ISIS collects revenue from a variety of sources, including: drug and artifact smuggling, human trafficking and hostage-taking, taxation, minor cryptocurrency transactions, petty crime, and, perhaps most significantly, oil seizures and resale.

As the Trump administration considers strategies to defeat ISIS in Syria, the US-led coalition should consider what primary factors motivate ISIS to fight for Raqqa: is there a particular tipping point at which the costs become too high and the benefits too low to hold on to the city? The US-led coalition forces can capitalize on the inherent challenges for not only holding territory, but the liability of sustaining the urban population in Raqqa in order to diminish ISIS’s capabilities. Denying ISIS access to oil fields and facilities would pose a serious impediment to their ability to maintain a well-funded organization able to provide services as a state.

Raqqa holds ideological significance for ISIS as its self-proclaimed capital. ISIS claims to be ideologically-driven by its desire to build an “Islamic” caliphate, but the group has abandoned symbolically significant territory in the past for practical reasons. In October 2016, ISIS relinquished their hold on Dabiq a town in northern Syria with profound ideological meaning. According to an Islamic prophecy and in line with ISIS’s apocalyptic narrative, Dabiq represented the “end of times showdown” between Muslims and infidels. Nonetheless, in the battle for Dabiq against Syrian opposition forces, ISIS put up “minimal” resistance and withdrew from Dabiq when the town became pragmatically untenable.

In spite of the loss at Dabiq, many ISIS sympathizers and supporters contend that the group will remain legitimate so long as it has a de facto capital and system of governance. ISIS continues to make great efforts to maintain its hold on Raqqa. Losing territory in and around Mosul meant losing recruits and reputation. Holding Raqqa can help maintain credibility among its followers. However, reputation alone is unlikely to prevent ISIS from abandoning Raqqa amid practical considerations.

A main source of income for ISIS is taxing Raqqa residents. According to the US Drug Enforcement Agency, many contemporary terrorist organizations are “funded through drug trafficking proceeds, or the taxing of drug routes throughout the world.” Some scholars suggest that the link between the drug trade and terrorist financing is “exaggerated” given that funds acquired from the drug trade are largely indirect, such as taxing the fuel needed to drive the car or carry the drugs. ISIS also collects taxes on goods (like oil, drugs, and other products) and people crossing at border checkpoints. According to analysts at IHS, in April 2016 approximately fifty percent of ISIS revenue was from taxation and confiscation.

ISIS also collects taxes from banks, and properties. The need to control territory is for collecting business and resident tax. As of April 2016, ISIS collected taxes at the following rates: ten percent from residents, fifteen percent from businesses, two percent in sales taxes, and five percent tax on bank withdrawals. Christians living under ISIS control are made to pay a “protection insurance” or a “tribute” to avoid expulsion from Raqqa. Along similar lines, ISIS collects “religious fines” from individuals who fail to correctly answer questions about the Quran. Residents also pay fines for product repairs, such as broken satellite dishes, and ISIS taxes businesses for services like electricity and security.

Contemporary maps and aerial imagery of Syria provide insight to the group’s access to major roads and oil refineries, as well as their proximity to oil fields and international smuggling routes. When ISIS seized Deir Ezzor in 2014, it gained control over Syria’s largest oil field, al-Omar. ISIS also took control of Tanak, Jafra, Ward oil fields near Deir Ezzor, and Shaer and Jazal oil fields near Homs. ISIS also controls several oil fields located on the outskirts of Raqqa. The majority of Syrian oil fields not under ISIS control are located in and regulated by Syrian Kurdistan, which makes the Syrian regime largely dependent on others for oil. To quantify, it is estimated that ISIS earns approximately one million dollars a day just from selling oil to the Syrian regime and is believed to be the largest single source of ISIS income.

Major roads connect Raqqa to Aleppo, Hama, Homs, Damascus, and Deir Ezzor that provide transportation routes to access ISIS customers and oil refineries. ISIS collects crude oil in large pits located at its oil fields. Local traders drive to the oil fields, wait in a queued line, and fill up their trucks with crude oil, before doing one of three things with the oil. Some traders have a contract with refineries––most are not owned by ISIS because air strikes destroyed its refineries––to transport crude oil from the pits to the refineries. Other traders sell crude oil to a second trader that transports it to rebel-held areas of Syria and Iraq. Thirdly, traders may sell crude oil directly to a refinery or local oil market. ISIS also frequently supplies crude oil directly to refiners, then sells the refined oil or uses it themselves. ISIS shares the profit from the refined oil with the refinery owners.

In recognizing the importance of oil trade to ISIS’s longevity, the US-led coalition has targeted its oil capabilities. The coalition destroyed ISIS’s oil ministry headquarters in Mosul in June 2016, killed ISIS’s oil minister in August 2016, and conducted air strikes aimed to “disable” infrastructure and equipment needed for ISIS’s oil production. However, ISIS has proved resilient in their ability to rebuild what they can and maintain their lucrative oil business. This is largely due to the simplicity of ISIS’s oil refineries, which are mostly made from steel. ISIS intentionally uses older equipment to more easily replace and rebuild parts as needed. Today, ISIS strives for maximum output and profit by maintaining contracts with independently-owned refineries and simultaneously rebuilding their own refinery capabilities.

Complete destruction of oil capabilities in Syria would likely obstruct opportunities for reconstruction. In fact, the IMF reported that Syria’s overall GDP declined by approximately fifty-seven percent from 2010 to 2015. Likewise, oil and gas GDP decreased by an average of twenty-eight percent within the same period. Non-oil GDP fell by an average of fourteen percent between 2011 and 2015. Oil is significant to Syria’s national economy, and requires special consideration for future reconstruction.

Supporting opportunities for Syrian reconstruction does not have to impede counterterrorism strategies. Effective counterterrorism that also lays the groundwork for future revitalization could call for denial of resources to ISIS, instead of obliteration of resources in Syria. Specifically, the US-led coalition could deny ISIS access to oil fields, refineries, major roads, and other travel routes where oil is produced and trade is conducted. Despite on-the ground challenges such as coordination and communication with locals, the US-led coalition could implement a “denial” approach, instead of a scorched earth policy that hinders future revitalization in Syria. A strategy of interdiction and denial will lay the groundwork for the defeat of ISIS in Syria and the revitalization of Syria’s production and economy.

Rachel Kreisman is an intern at the Atlantic Council’s Rafik Hariri Center.

Image: Photo: A man walks at a makeshift oil refinery site in al-Mansoura village in Raqqa's countryside May 5, 2013. Many civilians in the village who lost their jobs due to the Syrian conflict are making a living by refining crude oil to extract useful fuel such as gasoline and kerosene for sale. Picture taken May 5, 2013. REUTERS/Hamid Khatib