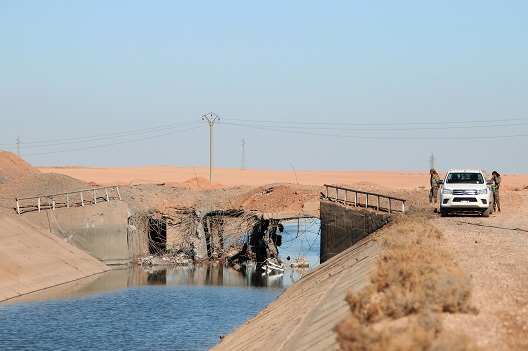 Syria is one of the most water poor countries in the world. The United Nations Development Program reported that in 2009, just three hundred cubic meters per year of freshwater were available per person. This is a stark comparison to a yearly global average of at least one thousand cubic meters per individual. The war in Syria has destroyed key water infrastructure and made Syrians even more water-insecure through the destruction and bombing of pipelines, sewerage, and major reservoirs along with irrigation networks.

The city of Raqqa is no better off than other Syrian cities despite the Euphrates, Syria’s main river, cutting through the province. Water shortages, power cuts, shortages of the fuel to operate pumps, and with continued bombing of irrigation and pumping stations during the battle against the Islamic State (ISIS, ISIL, or Daesh), have combined to create a humanitarian catastrophe. Swathes of farmland that residents rely on for their livelihoods are now off limits. Many residents of the city and the surrounding countryside have no access to drinking water, forcing them to rely on wells or untreated water drawn directly from the river. This in turn has caused a surge in water-borne diseases children catch such as typhoid and salmonella, according to an IRIN news report.

The US-backed Syrian Democratic Forces (SDF) control the three biggest dams in Syria (the Euphrates, Baath and Tishrin dams) which together supply around seventy percent of the country’s water and electricity needs. According to the World Bank and the Syrian regime’s Ministry of Water Resources, the SDF controls around eighty percent of the irrigated agricultural land in the country’s northeastern Jazeera region (the riparian zone around the Euphrates).

The Tabqa Dam, fifty km (thirty miles) west of Raqqa, is some 4.5 kilometers (2.8 miles) long, with a width of twenty meters (sixty-six feet)at the top and sixty meters (197 feet) at the base. Also known as the Euphrates Dam, it contains electricity generators and restrains a lake containing some ten billion cubic meters of water. At the northern entrance to the dam is the al-Balikh channel, used to balance the flow of water and ease pressure on the dam as well as channeling off water for irrigation. Also attached to the dam is an electricity transformer which produces some 2.5 billion kw a year. The dam also provides irrigation water for more than 640,000 hectares of agricultural land.

The area north of the lake has seen intense fighting between SDF and ISIS forces. It has also been hit by international coalition airstrikes which targeted the dam’s main control room, cutting off the self-feeding mechanism that operates its gates, halting all its equipment, taking its electricity generators out of service and turning it into nothing more than a basic dam.

The Baath Dam, the third-biggest in Syria, lies between Raqqa city and al-Thawra, holding back ninety million cubic meters of water. It is a regulating dam, three km long (1.86 miles), sixty meters (196 feet) wide at its base and ten meters (33 feet) high. It also serves an electrical generator that puts out 375 million kilowatts a year. It has played a major role in boosting agriculture in the Jazira region or present day al-Hasakah province.

Several power stations are attached to the dams and elsewhere on the Euphrates River and its tributaries in Syria, all of which are under SDF control. As part of a re-stabilization program in areas seized from ISIS, the US is supporting maintenance efforts on many of the generators. But the plan currently in place, which depends on basic renovation operations aimed for the most part at providing drinking water, fall short of the main goal of re-stabilization in an area that relies heavily on agriculture. The deterioration of that sector has caused hundreds of thousands of residents to lose their jobs and pushed many to immigrate or take up arms.

The Syrian Economic Task Force, a group of three hundred Syrian experts set up in 2013, has developed a plan to revive the vital water and electricity sectors, including the Jazira region. It covers rivers and power stations and aims to use local expertise as well as international and local input on what needs to be done. The plan consists of three parts: short-term, mid-term and long-term. The first phase involves fixing water pumping and treatment stations to provide water for irrigation and to revive farming in the area.

The mid-term phase involves renovating damaged hydro-electrical plants and completing projects that were started but put on hold, as well as supporting agricultural reclamation projects and improving irrigation. Finally, the long-term plan is to set up new projects and install more modern, economic, and environmentally-friendly equipment. But the urgent question is: who will implement these projects? Will the job of rebuilding include implementation of strategic projects to support the area’s economy and water security? Or will they be superficial projects limited to fixing damage in order to claim that achievements have been made? Will the Assad regime have its own share of infrastructure renovation under special deals, guaranteeing it can keep control of vital installations? These are important questions for leaders of the international US-led coalition; which are clearly confused about the next stage of the fight against ISIS in Raqqa and ultimately leaving civilians to an unknown fate.

The water war is no less important than the fight against ISIS. Stabilizing and improving the water situation will play a big role in draining one of the most important wells of terrorism—poverty among the area’s residents, who depend heavily on agriculture. Tackling the water situation will also play a major role in restoring social and political stability to a region that has suffered throughout the last six years from a succession of rulers who have destroyed its infrastructure.