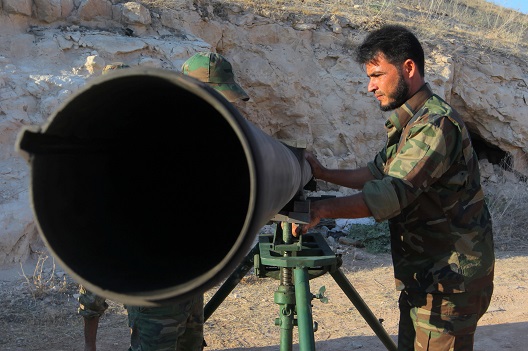 Syrian rebel forces have reached the village of Qamhana in the northern Hama countryside, the scene of fierce clashes between regime forces and Hay’at Tahrir al-Sham (the Levant Liberation Committee), which includes jihadist factions such as the Fateh al-Sham Front (formerly the al-Qaeda affiliated Nusra Front). The village lies four kilometers (2.4 miles) from Hama city and, along with Zayn al-Abideen, it is an entry point to the city — whoever controls the hill controls Hama’s airbase and the city itself.

Jihadist forces, most prominently Tahrir al-Sham, have launched an assault named “In the Path of Allah we Advance,” taking over important villages and towns including the village of Khattab, northwest of Hama, where several ammunitions stores are based in an area called Ruhbat Khattab. Meanwhile, more moderate factions launched another operation they called “Echo of the Levant,” taking over villages including Shalyut and Qala’at Shayzar, west of the Christian town of Muhradah, which is now caught between two arms of a pincer formed by rebel forces. The rebels guaranteed residents’ safety but residents refused them entry to the town. They reached its outskirts and rebel commanders said they would not carry out any military operations to enter it, opting for a negotiated entry. But the town’s residents rejected the idea. Many of them are eastern Christians who have suffered rebel rocket attacks in the past, but have also been abandoned and left defenseless by the regime. In the end, the rebels made do with surrounding the town from three sides and leaving it behind their front line.

Jaysh al-Izza, a major moderate faction, inflicted heavy losses on the regime, targeting a large gathering of regime troops with an American TOW missile. The faction’s media team posted a video of the attack and another in which it hit a T-90, one of Russia’s most advanced tank models.

Regime losses in the latest battle were a blow to its fighters’ morale and exposed the weakness of its forces. Senior commanders Brigadier General Hussam Asaad and Colonel Haydar Saleh were both among the dead—both are Alawites from Tartous, the heartland of the Assad regime. Hezbollah’s Bilal Munir al-Zibawi and the commander of the National Defense militia in Qamhana, Mohammad al-Kir, were also killed.

The regime mobilized all its available forces to defend Qamhana, which separates the rebels from Hama city and its airbase. It sent columns of troops commanded by Brigadier General Suhail al-Hassan, one of the regime’s top military commanders. It also brought in Iranian troops and Hezbollah militiamen as it tried to halt the rebels’ advance, which coincided with rebel gains in the Damascus area.

The NORS Center for Security Studies, a recently formed group that focuses on Syria and Iraq, said rebel forces had seized up to 215 km2 (83 mi2) in battles that were at their most intense in the village at the entrance to the city. However, Sheikh Adnan al-Arour, a preacher from Hama famed for his fiery speeches urging Syrians to fight the regime, did not welcome the latest advance. He called on rebel forces to keep their distance from Hama because entering it would lead to the direct targeting of civilians. His tweets prompted widespread criticism from parts of the opposition, particularly one tweet reading: “It is prohibited (under Islamic law) and for military reasons to enter inhabited areas until the enemy’s bases around it have been eliminated, so rebel fighters and civilians don’t become a tempting target for enemy fire as happened in Aleppo and Homs.”

Ahrar al-Sham and Faylaq al-Quds were quick to join the battle after the arrival of major reinforcements. It is notable that the former started using TOW missiles again. Rebel forces destroyed more than 30 tanks during the battle. Rebel tanks resisted the force of Russia’s military machine but are still unable to avoid the damage and losses caused by warplanes, especially those taking off from the Russian base of Hamaymim. Air power remains the regime’s main edge over the rebels.

The Alawites are genuinely afraid, especially those living in the towns of Salhab and al-Suqaylabiya in the Hama countryside, where rebel rocket attacks can reach them. On the ground, their fear manifests in the mobilization of fighters and the recruitment of dozens of young men. This means that rebels should avoid those villages, such as Maan, which opposition forces have still not entered as it would cost them heavy casualties.

The Russian media showed its annoyance at the behavior of regime forces in battles against rebel factions in both Damascus and the Hama countryside. The Nezavisimaya Gazeta daily quoted a Russian expert saying:

What can be said if soldiers leave their posts of their own accord, even during battles, and commanding officers have a major struggle understanding the concept of military discipline and the importance of carrying out military missions? Syrians take the same attitude when it comes to periodic maintenance of equipment and weapons, meaning it is rapidly degraded. Talk of behind-the-lines logistical support units in the Syrian Arab Army is generally a separate subject.

The Turkestani Party and other Caucasian and Chechen fighters are preparing for a further battle in the Latakia hills to reach the al-Ghab plain. A jihadist spokesman, Abu Aisha al-Qawqazi, said that Turkmen fighters plan to head towards the Jurin area, the region’s biggest base for Iranian militias. Prior to that operation, Ahrar al-Sham targeted a Russian helicopter in the hills. Rebel media outlets were unable to film it being hit, but Russian fighter jets were filmed flying low overhead. Regime forces have shown that they fear any additional military operation that could complicate the situation, and are focusing instead on halting recent rebel advances. The regime has responded harshly to those developments and bombarded the town of Jisr al-Shughur with dozens of rockets and at least 23 air strikes as it tries to prevent the forthcoming operation.

Dhahi Khalfan, Dubai’s deputy police and public security chief in Dubai, said Bashar al-Assad needed to reach an agreement with rebels in the coming days because the army would soon be in an extremely dangerous position and developments now could affect the Geneva talks. He said that was reflected in the faces of the regime delegation there, while opposition envoys appeared to have more self-confidence.

Alawites in Syria’s coastal towns believe that Russia will not abandon them, at least for the time being, but they do not trust in the ability of their own who have joined the army and the Fourth Division. The notion of support for the leader and the nation has become a commodity that can be sold for hundreds of thousands of Syrian pounds, especially by those who guard checkpoints and allow fugitives and Sunni men on the run to pass in exchange for money, to the annoyance of the Russians. Even the Christians in the Hama countryside have lost their faith in the regime army’s ability to protect them, prompting them to set up their own local militias to prevent theft and preserve the city from abuses by both rebel and regime forces. Opposition activists report that the regime has even evacuated detention centers in the city, further destroying locals’ faith in regime forces’ ability to halt rebel advances.