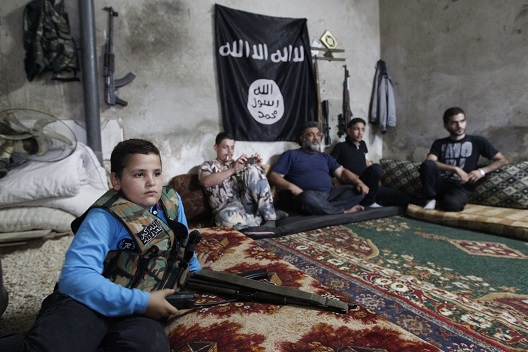 “The Cubs of the Caliphate” is what the Islamic State (ISIS, ISIS, or Daesh) calls its child recruits and fighters under the age of  eighteen.  An estimated 2,000 conscripted minors have undergone “Sharia” and military training in ISIS camps, learning to use light and medium weaponry, shoot, dismantle and reassemble weapons, go on raids using live ammunition, and do other tasks for for the group such as logistics, spying, guard duties, manning checkpoints, and forced labour. The organization has raised them in its way of thinking, taught them to declare other Muslims infidels, and instilled them with all of its extremist beliefs. It has used them to spy and hunt down its enemies, as well as displaying them in its videos, to send a message to its enemies: this war will last generations.

ISIS is on the verge of territorial defeat in Syria: Raqqa is all but liberated, leaving only Deir Ezzor as the last major ISIS-controlled city in Syria. It seems easy to believe that once ISIS is defeated militarily, the liberated areas will be free of future threat. But ISIS members who have fled towards areas controlled by the Syrian Democratic Forces (SDF), the Free Syrian Army, and Turkey all pose a hidden danger. So do their “cubs.” They are not simply an ISIS media tool. These children, trained and ideologically carved as ISIS sees fit, are emotionally bound to their trainers and the group’s security organs. Their strongest ties remain to ISIS, and their skills are most suited to military operations. This will prevent them from reintegrating with society, and that isolation will make them more pliable for ISIS.

As these children head into an outside world they have been trained to hate, they become loaded weapons. They see that world as full of infidels and are full of rage against its residents. The outside world is not prepared to deal with them. This poses a delayed, but very real danger. Their feelings of hatred and ostracism will only hinder their chances of gaining a normal life and could drive them to crime. Given that these children are traumatized after growing up surrounded by radicalism and war, without gaining the basic knowledge enjoyed by their peers, it will be hard for the new communities to know how to deal with them.

These children have witnessed acts of torture, killing, and flagellation by ISIS fighters. In some cases they were forced to take part in such brutality themselves. Today, they are in desperate need of psychological rehabilitation by specialists and trainers up to such a task. Almost no efforts are currently underway to reintegrate these children into their new society. Like many other non-military aspects of the operation to take Raqqa, no plans for dealing with child soldiers are exist.

The important question today is how to deal with these child soldiers. Programs to rehabilitate and integrate child fighters have proved their worth in previous armed conflicts. The children are identified, weapons are removed from them and their environment, and they are placed in temporary care centers and later returned to their families once they are identified. The period in care varies from place to place. In Sierra Leone, child fighters were detained for six months, while in Afghanistan they were held for just a few days. In the key stage of the reintegration process, they were then brought back to society and their families so they could reestablish links with them.

But efforts to rehabilitate jihadist children in Syria and Iraq pose additional difficulties. For example, their family or tribe may itself be part of ISIS or hold extremist views. That is on top of the tribal, national, and religious sensitivities such as Shia-Sunni Arab-Kurdish tensions, in the ongoing seven year conflict. To be effective, rehabilitation programs need to adjust by putting children through a comprehensive evaluation by specialists and trained practitioners who can determine each child’s psychological and social competence and their individual needs.

Sending these children back to their families could cause problems if the families or surrounding society are embroiled in a local conflict, heavily affected by ethnic and religious tensions, or if local notables have ties to ISIS. But given the difficulty of finding foster homes to host them in the foreseeable future, along with local worries about western ideas, which are seen as based on interests and evangelistic campaigns, there is no choice but to return the children to their families. One option to help would be specialized committee to follow up with the children and families and monitor their reintegration process.

Former child soldiers could also be placed in mandatory rehabilitation programs that take into account their unique situation and Syria and Iraq’s religious society. The child and family would have to be educated on the effects of violence and extremism, as well as, in many cases, basic religious teachings and some basic skills education for the children. Teaching on Islam, though risky if done by an outside organization and seen as trying to influence Islam, can work through local organizations and religious leaders. Work must be done to challenge what they have learned and adapt their behaviour. This also requires specialists in Islamic law who can turn young jihadists away from extremism and lead them towards moderation.

Reintegrating children into society is a long term process, requiring commitment at the local and international levels. However, since the start of the war in Iraq in 2003 until today, many donors to civil society programs in Syria and Iraq have rolled back their financial support. This will open the door for government as well as pro- and anti-government groups to take advantage of children. While exploiting child soldiers to fight new wars is one risk, non-military uses such as spies, how governments in the past have used children, is also a risk.

There is an absence of effective programs aimed at returning stability to former ISIS areas, which shows that the United States’ strategy of only providing military support for the battle on the ground is a temporary media victory for the Trump administration. But it will be catastrophic if it leaves behind sleeper cells that can grow into an unknown danger in the future.

The work of rehabilitating children in areas liberated from ISIS, particularly those who were recruited by the group, is an essential step towards getting rid of the group and the violence and extremism it represents. What ISIS started through its training and ideological programs, created a generation of fighters it sees as “tidings of the Caliphate.” It has sent them out as dangerous monsters, which they will remain unless they are tamed. Without proper treatmeant, these children will continue to harm themselves and society.

Image: Photo: Abboud, 12, rests with fellow Free Syrian Army fighters in Aleppo's Sheikh Saeed neighbourhood, September 28, 2013. Abboud and his brother Deeb, 14, both school-going children before the civil war, joined the Free Syrian Army after the deaths of two of their brothers and an uncle in the conflict. REUTERS/Muzaffar Salman