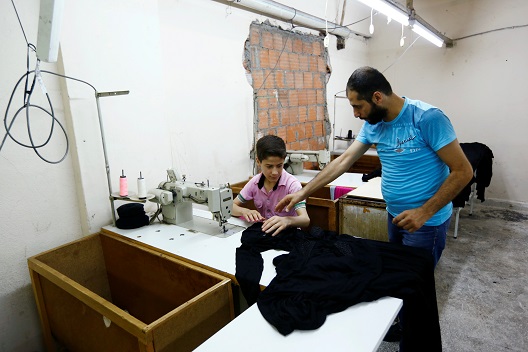 After more than a year of heated debate among the Turkish public and authorities, thousands of Syrians living across the country have begun receiving citizenship. The first batch to receive decisions in early August included fifty thousand Syrian refugees, mostly holders of university degrees, such as doctors, engineers and teachers, along with their families. But decisions on granting citizenship are not subject to clear criteria such as knowledge of the Turkish language.

An interior ministry official said the country would use set criteria to grant citizenship to Syrians who undergo a means of testing including examination of their professional, technical, and mental skills. He ruled out the possibility that all of the more than three million Syrians in Turkey would receive Turkish nationality.

Qusay Abdulrahim, a teacher, was able to obtain citizenship rapidly through streamlined measures. “The authorities themselves chose who was eligible and told them they must complete their paperwork,” he said. “Then they were approved after nine months of investigation and security checks. They were told they must go and pick up their Turkish IDs, despite the fact that some of them didn’t meet the normal criteria for receiving it, such as length of stay in Turkey, knowledge of the language, and identity documents.”

A Syrian refugee who has lived for three years in Turkey, said that most of those selected were teachers working in temporary schools, Syrian doctors working in health centers and a small number of businessmen, along with employees of international organizations.

Once their legal status is changed, those who receive citizenship also receive various benefits, said lawyer Arwa al-Sousi. A refugee who has received citizenship “will be treated as a Turkish citizen who is subject to the same laws and has the same rights and duties,” he said, denying rumours that Syrians who had been granted Turkish citizenship were barred from travelling or voting.

However, Syrian refugees with Turkish citizenship who live on Turkish soil do find themselves blocked from certain benefits they could previously access, such as free hospital treatment, financial aid from the Turkish Red Crescent, and government sponsored grants for Syrian students.

Furthermore, every Syrian refugee who gains citizenship after entering the country before the age of 23 is required to do military service (known as “serving the flag”), something that has raised many questions among those who have been naturalized.

Sousi said that despite the additional financial burdens taken on by those who receive citizenship, especially the cost of health insurance (around $17 a month), having citizenship provides legal cover and a sense of security. It also makes it easier to do various things that are hard for Syrians, such as travelling, buying property, or registering births.

Ibrahim Hijazi, from Lattakia, who has a degree in mathematics, was a refugee in Turkey before entering the seven stage process. Along with his wife and child, he finally obtained the proper paperwork and became Turkish citizens.

Ibrahim said his happiness was mixed with sadness about his previous country, saying that having the citizenship of another country meant that his dream of returning was over.

“Obtaining Turkish citizenship changes many things in my life. It guarantees my future and that of my family, up to a point, especially given the enormous difficulties I have faced after presenting my documents that showed I only had Syrian citizenship,” he said.

Days after receiving his Turkish passport, Hijazi was preparing to leave for Qatar to visit his brother for the first time in seven years. He will also now be able to buy a house, travel freely within Turkey, and work without barriers and without having to obtain official permission.

What Does Turkey Gain?

Syrian refugees have raised many questions of late over who has the right to win citizenship, especially as so many of them aspire to it.

While the Turkish authorities have yet to set out a clear mechanism for selecting candidates, they have opened the door to applications for university graduates, while at the same time barring many from travelling abroad—even some who have been granted asylum in states such as Canada, Holland, and the United States.

Nisrin Tarkawi, a teacher who works in Antakya, obtained asylum in Holland along with her family several months ago, but was surprised to find, even after she got hold of an entry visa, that Turkish authorities would not let her leave the country as her name was on a list of candidates for citizenship.

While Tarkawi had not indicated that she wanted Turkish citizenship, preferring to head to Holland with her husband and children, she is unable to do so as her name is on the list as a teacher.

Commenting on the inclusion of only Syrian graduates and businessmen on the list, human rights activist Ahmad Qaddour said talk of granting citizenship had begun two years previously, when several countries began selecting Syrians living in Turkey with certain skills and granting them asylum, something Turkey saw as undermining its own interests.

Qaddour said any state had the right to secure its interests, and that Turkey had chosen to invest the positive aspects of refugees and take advantage of their capacities, adding that some Syrian business owners had been able to pump vast sums into profitable investment projects in Turkey.

Qaddour ruled out the possibility of three million Syrians currently living in the country winning Turkish citizenship, saying no more than 100,000 were likely to do so because of resistance from the Turkish opposition and the government’s fears the subject could be used against President Recep Tayyip Erdogan ahead of the next presidential elections.

To obtain Turkish citizenship, a Syrian has to go through seven stages. After the required papers reach the population registry, they are sent to the directorate general and the interior ministry. The hardest, fourth stage includes a security checkup, three months ahead of a final decision.

Interviews indicate that some candidates have been rejected during the security check, possibly because they did not speak Turkish, had experienced security problems, or had submitted false education documents.

The decision to grant citizenship to certain Syrians in Turkey, despite domestic political wrangling, will have a direct positive impact as it eases and speeds up the process of integrating these people into Turkish society. But at the same time, it will entail a great loss to Syrian society as it waits for the war to end and for reconstruction to begin as the displaced return.

It will be in great need of skilled Syrians, but those who have received Turkish citizenship may well decide to remain in their new country.