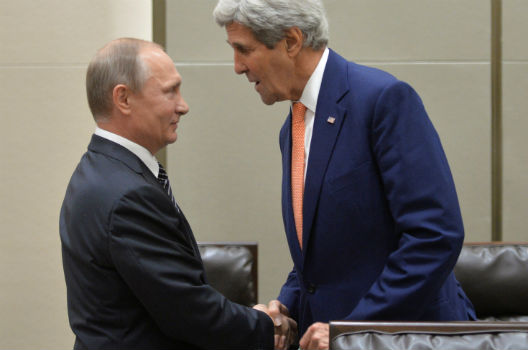 Those who advocate modest military measures to stop or at least slow the mass murder of Syrian civilians by Russia and its Assad regime client should not evade the patently unfair question they are often asked: “Are you willing to risk World War III?” As important as it is to defend civilians—for both humanitarian and policy reasons—the answer, of course, must be “No.” And even if world war is a remote possibility, any circumstances possibly bringing the armed forces of nuclear powers into contact are troublesome. But what of those who use the World War III ploy to argue for continued American passivity (coupled with soaring, empty rhetoric) in the face of defiant, unspeakable atrocities executed by those who have come to count on total impunity? Are they answerable for nothing in terms of risk? If Russian President Vladimir Putin concludes, on the basis on American behavior in Syria, that Uncle Sam is an empty suit—willing to talk about everything but stand for nothing—is that a risk-free outcome in Syria and the world beyond?

If anything at all has been learned from the past five years of Levantine murder and mayhem it is this: what happens in Syria does not stay in Syria. Even if it did—as Obama administration senior officials hoped it would, way back when—American passivity in the face of mass homicide would still have raised questions and inspired objections, both moral and policy-related. But nothing about this abomination has been contained within Syria, other than a ruling family and an enabling entourage preserved by Russia and Iran.

Consider the spillage. Syria’s neighbors (including a NATO ally) have been overwhelmed with refugees and beset by economic challenges. Western Europeans—all allies of the United States—have felt a migrant crisis largely fueled by Assad regime atrocities undermine their unity and roil their politics, all to the undisguised delight of Moscow. The direct line between a hemorrhage of humanity from Syria and a vote in the United Kingdom to leave the European Union is clear. Yet there is something even more menacing for the world beyond Syria: lessons Vladimir Putin may be learning from Syria to be applied elsewhere.

What, after all, has Putin seen in the course of this crisis? He saw an American president call on Assad to step aside and then do nothing even to marginalize Syria’s ruling family and its criminal entourage. He watched a ‘red line’ drawn rhetorically, one warning ominously of serious consequences for chemical warfare. He saw the line blurred with up to a dozen Assad regime chemical attacks ignored until the big one killed over 1,400 people. Then he witnessed the line’s erasure, as the promise of military strikes on the murderous Assad regime was abruptly revoked, without reference to senior American defense and foreign policy officials and with no advance warning at all to allies. When President Obama cited the red line climb down as his proudest Oval Office moment, one can only imagine what Vladimir Putin was seeing and thinking.

What is Mr. Putin hearing and seeing now, more than a year after intervening militarily in Syria? He has been warned by his American counterpart that he has entered a quagmire: an elegant, self-serving exercise in mirror-imaging by someone overseeing a desultory military campaign of sorts against the Islamic State (ISIS, ISIL, or Daesh) in eastern Syria. As his aircraft terrorize anti-Assad civilians by pounding their hospitals, schools, and even a United Nations relief convoy seeking to feed them, Mr. Putin receives an empty-handed American secretary of state imploring him to take pity, to fight al-Qaeda instead, and to oblige his client to do as President Obama asked of him over five years ago: step aside.

Given what Mr. Putin sees and has seen, is it unreasonable to assume that when he catalogues American performance in Syria he draws conclusions about the United States that transcend Syria? When Russia invaded Ukraine and annexed Crimea in early 2014, was the ‘red line’ episode of the previous summer not instructive? As Russian military aircraft skirt and penetrate NATO airspace, do we whistle past the graveyard assuring ourselves that American and European performance in Syria does not encourage and energize Russian assertiveness? As the Kremlin plays cyber warfare games inside the American political system, is there not a hint of contempt and a modicum of impunity coming through? What is it exactly about the performance of the United States in Syria that would give Putin pause anywhere else? When his air force deliberately struck a Syrian rebel unit trained and equipped by the United States, was he impressed by the words of protest? Does he have any reason to think he is acting recklessly anywhere?

Vladimir Putin is an opportunist trying to make domestic political hay from the impression that Russia is back as a military superpower. There is danger he could go too far. He may well think that Uncle Sam is an empty suit. The discovery of his error could be a costly undertaking, and not just for him.

A similar Kremlin miscalculation over a half-century ago led to the Soviet insertion of missiles into Cuba and a hair-raising nuclear crisis. The bureaucratic restraints on a dice-rolling Russian leader then do not seem to be in play now. If Mr. Putin decides to play with fire, set aside for a moment his personal calculations about Washington. Who in the Kremlin will slow him down?

For the people of Syria, for Syria’s neighbors, for American allies in Europe, and for the Obama administration, Syria has been the problem from hell. Yes, President Obama really did want Assad to step aside. Yes, the president sincerely thought a verbal warning would be good enough to prevent chemical attacks. Yes, he and his secretary of state truly believe—and are absolutely right—that Bashar al-Assad is a de facto ally of and a recruiter for ISIS. By basing his political survival strategy on collective punishment and mass homicide, Assad de-legitimized himself and made large parts of Syria safe for ISIS and for other criminal bands.

Still: Putin and Iran’s Supreme Leader—for separate but compatible reasons—have wanted Assad in power much more than the Obama administration has wanted him out. Russia and Iran have been willing to do the heavy lifting in Syria in spite of their client’s incompetence and his symbiotic relationship with ISIS. For all of Assad’s downsides, he serves Putin’s domestic interests in projecting a grand Russian comeback, and he serves Iran’s regional interests by subordinating his slice of Syria to Tehran’s proxy (Hezbollah) in Lebanon.

There is nothing in Syria as destructive as the Assad family and its entourage, and yet the United States has spent quality time over the past five years building rhetorical mountains and doing policy backflips while carping about an imperfect Syrian opposition and complaining about American partners and allies pursuing, in the absence of American leadership, their own agendas.

The sheer volume and eloquence of talk about the inadmissibility of mass murder, the requirement for accountability and justice, and the connection between children dead and ISIS alive may impress those whose lips are moving. But verbosity has had no operational companion. Washington proclaims the abomination that is Syria and then stands to the side as Assad and his enablers do their worst to Syrians, to Syria’s neighbors, to Western interests, and to the conscience of humanity. As Russia, the regime, and Iran create military facts by terrorizing children and their parents, the leaders of a hollowed-out West intone piously about there being no military solution for Syria: a non-expiring permission slip for doing nothing while people die.

None of this goes unnoticed by Vladimir Putin. One hopes and prays he sees Syria as the Obama administration does: a one-off phenomenon that means nothing anywhere else. One believes and fears this is not the case. Respect for Russia should be a cardinal principle of American foreign policy. Reciprocity is required. Yet with a cynical, opportunistic risk-taker like Putin in the Kremlin, it has to be earned: the old-fashioned way.

Those of us who beg this administration, in its dying days, to end the free ride for mass murder in Syria both to protect innocent civilians and to resurrect the prospect of a negotiated settlement, cannot pretend that the Russian presence changes nothing; that somehow only the operations of the Assad regime are to be complicated and damaged by actions we recommend. We cannot discount the risks of escalation, even in the context of overwhelming American military superiority. If President Obama gives Syrian rebels with whom we have worked effective antiaircraft weapons, or if he hits regime helicopter bases with cruise missiles, we cannot assume that Russia—based on what it has seen over the past five years—will not respond and escalate in the expectation that Washington will fold, quickly and unceremoniously. Indeed, this expectation—systematically (if unintentionally) implanted in Putin’s psyche—may constitute the greatest escalatory risk of all.

But those who have, albeit inadvertently and with the best of intentions, transmitted messages of American weakness, confusion, and doubt to the likes of Vladimir Putin also bear an explanatory burden. They have left millions of Syrian civilians defenseless and have placed at risk the credibility and reputation of the United States in the process. They have much to answer for. But first things first: explain to your countrymen how you are not putting global security at risk by acceding to mass murder in Syria and by encouraging Mr. Putin to think he faces an empty suit. And in so doing, please: do not try to attach the specter of World War III to those who have urged, in the context of Syria and for over five years, a convergence of word with deed.