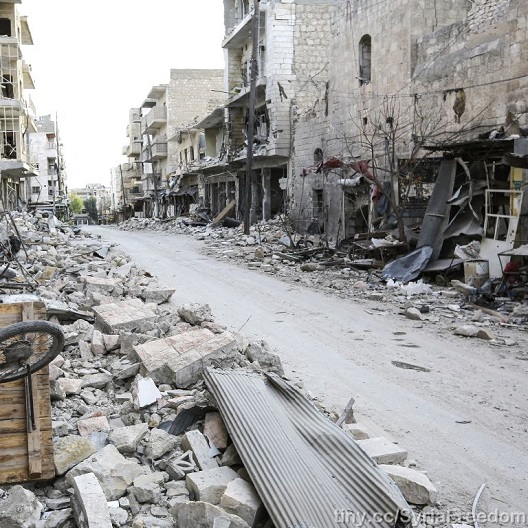 Moscow’s sudden interest in expediting the return of Syrian refugees to their homes is not prompted by humanitarian concerns. Neither is it motivated by a desire to promote political conditions inside Syria that would encourage people to return to the country from which they fled. It is about pressuring the West into fixing a country broken by Russia, Iran, and their client Assad regime. It is a kinder, gentler form of blackmail: either lavish reconstruction funding on the regime, or refugees won’t go home; indeed, there may be more of them arriving on your doorstep.Over seven years of civilian-centric warfare waged by the regime and its external supporters have driven more than half of Syria’s pre-war population from its homes. Refugees have, through no fault of their own, presented heavy burdens to Turkey, Jordan, and Lebanon. A largely Syrian surge of migrants in 2015 destabilized Western European politics and contributed to the rise of Putinesque nativism, something welcomed with glee by Mr. Putin himself. Now he unsmilingly poses a remedy for all of this refugee-inspired political inconvenience: rebuild Syria through Bashar al-Assad, and they will come.

Conservative estimates suggest that Syria will need $300 billion in some combination of grants, loans, and investment just to restore the economy to pre-war levels; an economy featuring high levels of unemployment and underemployment for the laboring many and an open-season for kick-backs and commissions for predators at the top. Having no interest in paying for the restoration of this state of affairs or any alternative, Moscow seeks instead to encourage others to pick up the tab.

The West has been experimenting with something new in its response to Russia’s refugee-related initiative: firmness. Moscow may have thought that President Trump’s warm endorsement of the Russian role in Syria at Helsinki would translate into quick success, and that money would flow to a regime that would employ everything not stolen outright for projects aimed at strengthening its own political grip. It is not, however, easy for governments accountable to law and to voters to direct taxpayer funds to criminal enterprises. Yet blackmail sometimes works. And the West has hardly distinguished itself during seven-plus years of Syrian violence.

The self-interested Russian approach aside, the need for reconstruction in Syria—political, societal, and economic—is clear and urgent. The amount of suffering and destruction inflicted on defenseless civilians has been staggering, and surely Syria’s neighbors and others merit relief from the refugee burdens they bear. And yes, one may stipulate that the Assad regime—borne aloft by a combination of Iranian-Russian determination and Western flaccidity—is not going anywhere soon. How to square this circle?

Perhaps the recent, unexpected, and positive approach of the United States and European Union to avoiding a trade war can serve as encouragement for allies getting on the same page substantively on the subject of Syrian reconstruction.

Unrealistic, rhetorical demands that Assad and his entourage first step aside might well be avoided. What is it, however, in specific, operational, implementable, and measurable terms that the West would need to see in Syria to feel assured that Western taxpayers will not be defrauded by professionals? What will be required in terms of transparency and oversight? How to avoid, in the delivery of aid and investment, a family enterprise for which corruption and mendacity are as natural as breathing?

Forthcoming discussions in Sochi may address these concerns. If Moscow is willing to cooperate with identifying and implementing concrete steps—some of them inevitably political—that can enable rule-of-law states and institutions to protect their constituents and participate in Syria’s reconstruction, then its elevation of the refugee issue might produce positive results for all Syrians, including those who have remained in the country since the spring of 2011. How much Moscow’s client would cooperate is another matter entirely. Mr. Assad reportedly believes that Mr. Putin and Iran’s Supreme Leader need him more than he needs them. He may not be wrong.

It is tempting to apply the Pottery Barn Rule to Russia and Iran in Syria: You broke it, you own it. But neither Moscow nor Tehran will play significantly in reconstruction; their role was destruction or, as they would characterize it, the defeat of terrorism. Surely the West does not want Syria to hemorrhage human beings indefinitely. Yet left to its own devices, the Assad regime will play fast and loose with Western money, defeating the purposes of donors and investors entirely. Unless Moscow wishes to base its regional power pretensions on a Levantine version of North Korea—or unless it is prepared to resort to more naked forms of blackmail—it will work with the West to make Syria safe for reconstruction assistance.

Frederic C. Hof is a faculty member of Bard Colleges and a senior nonresident fellow of the Atlantic Council’s Rafik Hariri Center for the Middle East.