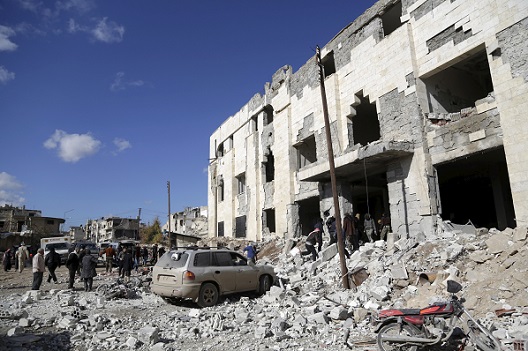 On December 22, Russian warplanes launched ten air raids against three northern Syrian villages in close proximity to one another: Bidama in western Idlib and Shahroura and Ain al-Ghazal in Latakia. These strikes killed 10 civilians, including four children and two women, and displaced hundreds of local families, turning the villages into ghost towns, according to the Bidama-based journalist Ahmad Khair. The objective of these strikes cannot be to combat the Islamic State (ISIS or ISIL), since the group has no fighters in these areas. Rather these strikes targeted the Syrian opposition in this region—a task for which the regime has found a capable partner in Russia.

The day after these air raids, Syrian regime forces launched a military operation with Russian air cover to seize control of the strategic al-Nuba Mountain, which overlooks the city of Salma. This city was the opposition’s last remaining military stronghold in the Latakia countryside before it was captured by the regime on January 11. Khair said that air attacks on civilian targets in advance of military offensives, such as those against Bidama, Shahroura, and Ain al-Ghazal, cause panic among opposition fighters, many of whom have families in villages behind the front-lines.

The regime continues to win ground in other areas. In Turkmen Mountain, located in eastern Latakia and on the border with Turkey, regime forces have pushed opposition forces back and now are less than 10 kilometers from the border. Russian warplanes have become a nightmare for the Syrian people, says rebel fighter Ghaith Abu Aisha.

Activists in the Latakia countryside confirm that ISIS is not present in the region. The majority of fighters in the area around Turkmen Mountain are Turkmen fighters supported by Turkey, in addition to Free Syrian Army (FSA) and Ahrar al-Sham fighters.

“It is clear that what is happening is score-settling at the expense of the Syrian people. Russia is putting pressure on Turkey by striking civilians on Turkmen Mountain in Latakia. Most of the Turkmen villages are now completely empty,” says prominent local activist Ali al-Hafawi. He added, “The situation on the border is a humanitarian disaster the likes of which we haven’t seen before. The coming days are not going to be easy, especially with predictions of heavy snowfall.”

Abu Khalil Khamis is a fighter with Ahrar al-Sham who previously fought the Assad regime on the front-lines near Salma. However, Khamis put down his weapons after an air strike destroyed his home near Bidama, forcing him to find a new place for his wife and children to live. “I have no choice. My children are all I have. I won’t abandon them when they are all I live for,” says Khamis. “I will not hesitate to stop fighting to find somewhere else for them to live, far from the reach of Russian air strikes,” he added, pointing out that he is one of many fighters who have put down their weapons after Russian air strikes destroyed their family’s or relatives’ homes.

Q: What are the biggest challenges you face as a field commander?

Rustum Abdeen: Without a doubt, the most challenging difficulty we currently face is Russian air strikes against unarmed civilians, including women, children, and the elderly.

Q: Is the area’s geography and mountainous terrain a positive or negative factor in the opposition’s battles?

Rustum Abdeen: The area’s difficult topography is in our favor. We have been able to hold out for nearly 80 days because we are from this area. We can maneuver because we have previous knowledge of the region’s topography.

Q: In your opinion, why has the regime been able to achieve its advances in the region?

Rustum Abdeen: Russian warplanes have launched hundreds of air strikes against civilians prior to attacking military targets. This has caused opposition fighters to fear for their wives and children. In my opinion, the Russian intervention came as the regime was nearing collapse and this is a trump card in the latter’s hand. Moreover, the regime has conducted an unprecedented number of air strikes on opposition-controlled cities and villages. It is relying on extremely high volume of firepower.

Q: What strategy are you planning on following in the coming phase, given the increase in Russian strikes?

Rustum Abdeen: We have to lick our wounds and return to the battlefield. To start, we have recently formed a joint-operations room in the Latakia countryside and we are working on forming defensive bases, securing our headquarters and disguising them from Russian planes. We have resorted to disguising our vehicles and equipment while only moving in small groups that advance deep into enemy territory to carry out attacks and then return. Recently, we succeeded in killing 100 regime soldiers and a number of Russian officers in the al-Nuba Mountains. We also confirmed that we were able to eliminate dozens of enemy soldiers during the time that we held out on the mountain before our withdrawal.

All of the opposition factions in Latakia province have called in reinforcements to stop the advance of the regime, which massive bombers are supporting for the first time. For its part, the FSA has not hesitated to send dozens of new fighters to the region. These reinforcements will conduct military operations in the days ahead during predicted snowfalls when Russian warplanes will not be able to conduct sorties.

“The snow will not be good for Assad’s forces. We are waiting for the snow because all of the regime’s advanced weaponry will not work in the snow,” says FSA commander Abu Rihal. “In these conditions, the advantage will go to the simple weaponry that we are accustomed to using, such as the Doshka machine gun,” adds Abu Rihal.

The total number of opposition fighters in the coastal Latakia region is difficult to quantify, given the recent withdrawal of some large factions such as the Turkistan Party. Additionally, dozens of fighters have been killed or injured in fighting, and others have left the front lines to attend to their families. All of this has resulted in a serious shortage of fighters in the opposition-controlled areas of Latakia.

Finally, any heavy snowfall will be a disaster for the area’s displaced people. The camps are already overcrowded and current supplies cannot support the current inhabitants, much less another influx of people. Most villages in the area are empty, with only the poorest residents—those who cannot afford to leave—remaining. Those who have fled their homes fear that if the regime advances they will lose the right to return.

Image: (Photo: Reuters. Residents look for survivors in a site hit by what activists said were airstrikes carried out by the Russian air force in the rebel-controlled area of Maaret al-Numan town in Idlib province, Syria January 9, 2016. At least 70 people died in what activists said where four vacuum bombs dropped by the Russian air force in the town of Maaret al-Numan; other air strikes where also carried out in the towns of Saraqib, Khan Sheikhoun and Maar Dabseh, in Idlib. REUTERS/Khalil Ashawi)