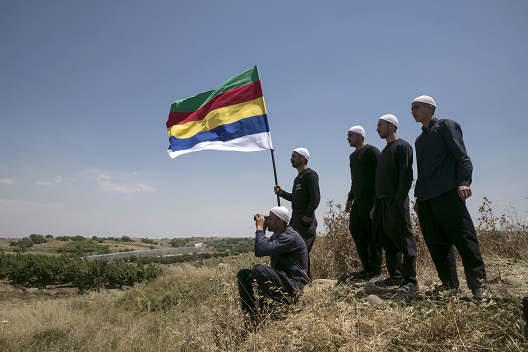 Recent rebel victories in southern Syria highlight the role of the Druze in the Syrian conflict. As the war’s frontlines shift towards the minority’s core territories, the Druze will come under pressure to redefine their stance toward the rebellion. Their decision will have a significant impact on the Syrian conflict—both militarily and politically—and could precipitate an acceptable end-state to the war. The United States and its allies should seize the opportunity to create the means and incentives for a Druze alliance with the nationalist insurgency in southern Syria.

The Druze are a small religious minority, born out of Shia Ismailism and concentrated in the Levant. They comprise roughly 3 percent of the Syrian population, living mostly in the southern provinces of Sweida, Deraa, and Quneitra. Druze religious tenets have historically shaped political behavior: the faith emphasizes national belonging over isolationism, but above all obliges Druze to protect their people and land. In times of conflict, the Druze prioritize their own security, either by aligning with whomever is most likely to protect them or adopting neutrality in the event that no party can do so.

Druze alignment and actions in the Syrian war have similarly been based on self-preservation. Historically, the community has relied on the regime for security. Calculating that the rebellion could not defeat the regime or secure the Druze community, the Druze opted to join the Syrian army or mobilize local militia rather than join the revolution. Their support for the regime, however, has been predominantly limited to battlefronts within Druze territory and has been contingent on regime provisions of food, money, weapons, and assurances that Druze fighters would not be compelled to fight outside Druze territory.

Recent Druze and regime behavior has highlighted the fragility of their alliance. Most recently, a Druze group called the Sheikhs of Dignity, led by Sheikh Waheed al-Balaus, has resisted and condemned the regime’s calls for Druze to fight on other Syrian battlefronts, outside the communal heartland. In response, the regime removed heavy weapons from the Druze province of Sweida. Influential Lebanese Druze politician Walid Jumblatt then urged Syria’s Druze to abandon the regime and join the insurgency. Further, the Druze have reason to fear that the regime could abandon the south altogether, as its actions in Palmyra, Idlib, and Kobani suggest a strategy of withdrawing from less significant outposts to protect its core territory in Damascus and along the coast. These developments reinforced Druze fears that the regime is neither particularly invested in nor able to guarantee their community’s safety.

Both the regime and the Druze fight for their survival. For the regime, this necessarily means war with the rebels, but the Druze have at least two other options: joining the nationalist insurgency or declaring neutrality. Thus far, Syria’s Druze do not appear convinced that the insurgency could protect them, likely because the latter has lacked the incentive and/or the means to do so. However, the rebels’ recent gains in the south and the general weakening of the regime may prompt both sides to reconsider. As the insurgency captures more territory and the military balance begins to shift, so too may the Druze calculus shift toward aligning with nationalist rebels.

The Nusra Front’s recent killing of twenty Druze villagers in northern Syria’s Idlib province has made an insurgent-Druze reconciliation in the south both more urgent and more difficult. Following the incident, nationalist insurgent groups publicly condemned the killings. A rebel alliance undertaking an offensive in the south also deliberately excluded the Nusra Front, claiming it did not share its vision for a united and free Syria. The bulk of Syria’s Druze population is in the south, where nationalists are stronger than jihadist groups. In contrast, hardline Islamist groups dominate the north. Thus, while a rebel-Druze alignment in the north would be premature at present, it is possible in the south. In any case, the Druze lack the central leadership needed to enforce a nationwide alliance with the rebels, so a southern-focused alliance is both possible and preferable in the short term.

Given the absence of a regime able and willing to guarantee Druze security in the context of war, the dominance of non-jihadist insurgent groups in the south acceptable to the Druze, and the prospect of working together with nationalist rebels to contain radical groups, the Druze may well choose the insurgency or neutrality over the regime. At the very least, if the regime decides to abandon the south, the Druze will need money, weapons, and ammunition to protect themselves; the insurgency and its foreign backers are a logical source.

The southern insurgency would also benefit from an alliance with the Druze, as it would deprive the regime of political and military support in the south and help the opposition secure strategic areas in Sweida and Quneitra. It would free up rebel resources, otherwise committed to Sweida, for deployment to other fronts and signal to other Syrian minorities aligned with the regime that the latter is not their only guarantor of security. If it learns from the regime’s mistakes, the opposition would allow the Druze to focus on defending their own territory, thereby denying the regime access to Druze areas adjacent to insurgent ones. An alliance with the Druze would also help nationalist rebels contain jihadist groups such as the Nusra Front and the Islamic State (ISIS or ISIL).

Shortly after the killing of Druze in Idlib, Walid Jumblatt met with Jordan’s King Abdullah II, seeking assurances of protection for Druze in southern Syria. Jumblatt’s Progressive Socialist Party also met with southern rebels. These meetings highlight an opportunity for the United States and its allies. A covert US-Saudi-Jordanian operation based in Jordan has enabled the southern insurgency’s military successes. The participating states should now adopt a sustained and aggressive outreach to Druze in southern Syria, encouraging, incentivizing, and enabling Druze-rebel cooperation. This outreach could include mediation and security guarantees, providing weapons, ammunition, and funding if necessary. In addition to putting pressure on the regime, such an alliance would broaden the support base for a post-Assad Syria, demonstrating that neither Syrians nor the United States and its allies have to choose between the regime and the jihadists.

Faysal Itani is a Fellow for the Atlantic Council’s Rafik Hariri Center for the Middle East.

Abigail Kukura is an intern with the Rafik Hariri Center for the Middle East.