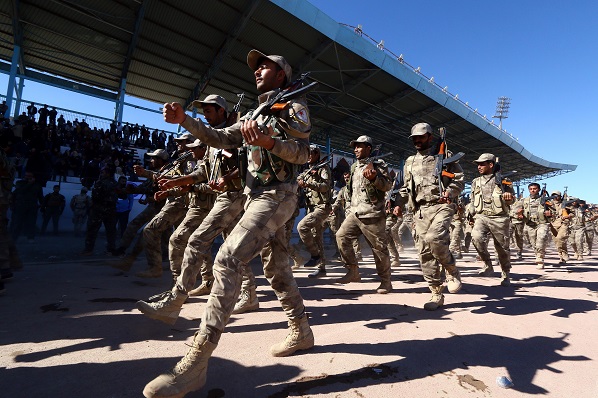 One thing to be learned from the uproar following the recent out-of-Syria presidential tweet is that “ready, aim, fire” makes just as much sense in government as it does on the firing range. By most accounts, US President Donald Trump is now where he should have been two weeks ago: in the “ready” phase, consulting with his national security team on the implementation of a strategy aimed at killing ISIS (ISIL, Daesh, Islamic State) in Syria and keeping it dead by preventing the pseudo-caliphate’s chief recruiting officer—Bashar al-Assad—from taking over liberated eastern Syria.

But the round fired before aiming may yet prove fatal. Syrian Kurds—the core of the anti-ISIS coalition ground combat force—are now imploring the Russians (a) to get them a good deal from the Assad regime and (b) make the regime abide by it. “Fire, aim, ready” has spooked the Kurds. Fearing abandonment by Washington, they may well abandon the fight against ISIS.

Without a ground force, the anti-ISIS coalition would be hard-pressed to finish from 30,000 feet what’s left of the fake caliphate in Syria. Yet if the Kurdish-dominated Syrian Democratic Forces (SDF) quit the fight, with the Kurds moving north to face a Turkish threat highlighted by President Trump’s misfired tweet, who will complete the work?

The options are not attractive. Undisciplined, pro-Assad Iranian-led militiamen—many of them Shia foreign fighters—might make locals long for the bogus caliphate. What’s left of Assad’s army is adept at stealing relief supplies and little else: it relies on the Iranian-led brigands to fight. Turkish military units might effectively engage what’s left of ISIS, but unless they were airlifted over Kurdish districts the concluding battle against ISIS might never be joined. Iraqi special forces might prove very effective in the Syrian sector of Mesopotamia, but would Iran allow it? The best and quickest way to kill ISIS in Syria would be to employ American ground forces or a professional, American-led ground force coalition of the willing. But how would a president, who abruptly announced evacuation, explain and justify such an about-face intervention?

Former US Ambassador to Syria, Robert Ford, has strongly endorsed the president’s tweet and criticized Mr. Trump’s national security team for having allegedly gotten too far out in front of the commander-in-chief. But that team has tried to build a strategy aimed at obtaining results in Syria defined by the president as important: defeating ISIS militarily; and keeping ISIS dead by preventing Iran and Assad from setting up shop in liberated eastern Syria. They have taken very seriously President Trump’s concerns—Israel-related and otherwise—about a continued Iranian-led military presence in Syria. And they have fully reflected in their work Mr. Trump’s low opinion of the murderous, terrorism-abetting Bashar al-Assad. Unlike Ambassador Ford, they do not see liberated eastern Syria as worthless real estate. Indeed, in February 2018 Russian mercenaries and others mounted a coordinated ground assault on oil fields the Kremlin deemed worth taking, only to be routed by American air power. Trans-Euphrates oil and agriculture are valuable assets the regime and its allies hope to see fall into their laps after others defeat ISIS.

Keeping ISIS dead (once it is finally killed) is not, as President Trump and others have suggested, the long-term responsibility of the United States. But failing to seal the victory in a battle approaching its fifth year would be to waste an anti-ISIS military campaign begun in late 2014. The battle against ISIS is not over until a decent, sustainable governance is in place.

The desired end-point for liberated eastern Syria (pending a political settlement for all of Syria)—the definition of victory over extremism and terrorism—is legitimate local Syrian governance that keeps ISIS dead and provides the long-awaited alternative to violently corrupt, Iran-dependent, family rule based in Damascus. For governance in eastern Syria to attain secure, stabilizing legitimacy it must be seen as competent, just, and appropriate by the governed.

Empowered local governance at the provincial and municipal levels of eastern Syria would contribute heavily to the goal of legitimacy. But the imposition of a Marxism-derived Kurdish ideology would not: certainly not in predominantly Arab areas. If Syrian Kurds now perceive any value at all in American intermediation vis-à-vis Turkey, they must quickly abandon any notion of playing a domineering political role in Syrian Arab communities. Ideally, Kurdish fighters would retire to Kurdish communities once the battle against ISIS is completed. Although their reluctance to do so would be understandable in light of the battlefield sacrifices they have made, victory over ISIS cannot be sealed if the obscenity that called itself a caliphate is replaced by imposed governance lacking the consent of the governed.

Getting to this desired end-point was a heavy lift before the firing of a premature round. The decision of the Obama administration not to go after ISIS with a professional ground force pumped years of oxygen into the lungs of the terror group. That decision, accompanied by a bilateral crisis with Turkey (which correctly saw the American Kurdish ally as the Syrian branch of a terrorist organization), was one of several woeful Syrian inheritances bequeathed by former US President Barack Obama to his successor.

Yet to forsake abruptly the anti-ISIS piece of that inheritance would be to produce a policy train wreck. Iranian-led militiamen and Assad regime executioners would enter and promptly set the stage for ISIS’ resurrection. Kurds and others who have fought in the anti-ISIS coalition would be abandoned for the edification of a world already pondering how best to deal with the United States. Turkey would soon regret the absence of a stabilizing American presence, notwithstanding the Kurdish connection.

The administration is trying to slow and control a runaway train that left the station when the president fired his tweet. Yet for a wreck to be averted, the circle of Turkish-Kurdish hostility in eastern Syria must somehow be diplomatically squared. This is a gargantuan task, and with the Kurds in panic mode it may be too late. But if ISIS is to be killed and kept dead, the United States must secure eastern Syria long enough for decent local governance—civilized rule reflecting the consent of those once governed by Assad and ISIS—to take root. Otherwise the fight against ISIS will have been a complete waste of time and treasure.