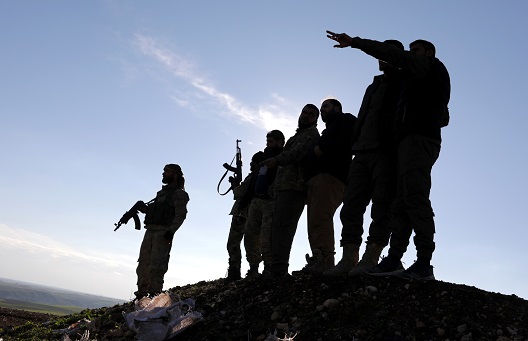 Eight years of constant war have brought pain and destruction to the Syrian people and their country. What these years have also brought is a chaotic kaleidoscope of armed opposition groups (AOGs) fighting against the regime of Syrian President Bashar al-Assad. With various forms of foreign fighters, agenda-ascribed funding, and rising religious and ethnic extremism; almost all of the existing Syrian armed rebellion—which initially aimed to liberate the Syrian people from dictatorship—has, regrettably, not only failed in achieving its goal, but also found itself contributing to the pain and destruction of its own country.

While, for many, the armed response to Assad’s extermination efforts may have seemed necessary, it could be argued that it was the regime itself that was most in need of an armed counterpart. The Assad regime is a deeply entrenched military dictatorship relied on engineering sectarian and ethnic threats to maintain its survival. It discovered for itself that in facing down an armed insurgency, rather than peaceful protesters, it had chanced upon the perfect recipe for subduing legitimate public demands for freedom, democracy, and political inclusion. After all, the use of unsanctioned violence for power is something the regime has long understood.

Nevertheless, there is more to Syria’s armed rebellion—which emerged after the 2011 uprising and included non-state actors—than just the loose justifications to counter Assad’s barbarism. Principally, there are the seemingly irreconcilable internal contradictions of the movement. One key point to understand is that the fragmentation of the armed opposition reflects the lack of unification across Syria as a whole, and highlighted in the rebel movement itself. Ba’athist-led Syrian society arguably never understood itself, its components, or its collective identity. One example among many could be the lack of knowledge and understanding Damascene Syrians had and still have regarding, say, the social life and economic classes in Deir Ezzor or Qamishli.

Society in Syria was kept together, unfortunately, through fear and coercion. The way many Syrians understood their multicultural identity was inexplicit and vague enough that communities refrained from genuine engagement with each other, living in an atmosphere of silent suspicion and serving regime’s survival and Ba’athist agenda. In many ways, Syrians have been living as residents rather than citizens of their own country. The Ba’athist regime saw the needs and desires of its people as irrelevant to the governance of the state. Syria then did not reflect the historical identities of its people or how they evolved as a society. This is not intended to simplify the structure and function of Syrian society nor to undermine the importance of Syrians’ historical memory. Yet it is clear that Syrians—of all backgrounds—today stand impotent to understand their collective self; let alone produce any sense of a genuine national identity.

As the influence of brutal, centralized power crumbled, Syrians of numerous communities reassessed who they were and what it was they aspired towards. The earliest stages of the uprising brought about an abstract space for Syrians to rethink their collective identity. Given the overall hope-infused Arab Spring environment  powered by the youth, that acted as the main driving force of the Syrian uprising, this space was filled with optimistic thinking with unifying and inclusionary themes. Syrians started to feel they could take charge of their own country and that as society they deserved better than eternal autocracy. However, the emerging political opposition movement failed to channel this space for social change due to political divisions and the continued exclusion of the youth movement, secularists, Kurdish contingents, non-exiled opposition leaders, and more. The armed rebellion that later ensued, came to dominate that space with its singularity identity and own interests.

This lack of unity in Syrian society really started to find expression in the armed rebellion in 2012 and 2013. For example Syrian Kurds, the largest Syrian ethnic minority, have long been discriminated against—politically, socially, and culturally—by the central state and the broader Syrian society. Because of this and of their exclusion from the Syrian opposition (armed and political), the Kurds sought to seek the survival of their own political identity on their own terms. Due to their complex history, they governed northern Syria, giving preferential rights to their fellow Kurds in areas with Arab and Turkmen majority populations, sowing further division.

The Arab opposition, which chose to prioritize its majority Sunni contingent, also failed to engage with Syria’s non-Arab communities. The narrow emphasis on the Sunni identity, due to sectarian division and Islamist domination, led to a once-justifiable rebel movement transformed into something shaped along religious ideologies and easily infiltrated by local and foreign jihadists.

Foreign funding programs—whether from Western powers like the United States or from regional states like Saudi Arabia, Qatar, and Turkey—also played a critical role in further dividing the armed movement and pushing it towards ideological dogmatism. It fell effortlessly into the trap of regional and international geopolitical competition, serving every other agenda except its own nationalist one. In the last two years, Arab and Turkmen rebels in northern Syria—backed by Turkey—fought fellow Kurdish Syrians almost entirely in accordance with Ankara’s agenda. While it is understood that separatist aspirations of the Marxist-inspired Kurdish group, the Democratic Union Party (PYD), are not in Syria’s national interest, it’s also clear that neither are Ankara’s. Arab Gulf states as well contributed to infighting among armed groups throughout the conflict.

The evolution of Syria’s armed rebellion attests to the dynamic relationships among its members, based on political aspirations, contradicting visions and ideologies, and funding. Armed groups in Syria sought their own desires while lacking the autonomy of their coercive power and gradually losing their legitimacy among Syrians, gifting the regime an ability to distort the image of a just cause by pointing at its inadequate defenders. It is hard today to locate rebel groups in Syria that hold nationalist aspirations and are concerned with the goals of the 2011 uprising. For many in the armed rebellion, the revolution has turned into a means for survival rather than achieving the liberation of all Syrians. Sadly, the fact is revolutions evolve and are difficult to predict, finance, stabilize, and easy to manipulate; the Syrian armed rebellion is nothing like it originally was in 2011.

However, the Syrian uprising is far from dead It continues to live in the hearts and minds of those who continue to strive for a pluralistic, inclusive, and democratic Syria. But we must not romanticize what the future may hold for Syrians.

After almost eight years of war, an end—how ever unsavory—is almost in sight to the violent Syrian conflict. Its victors are dictators, authoritarianism, foreign interests, and disintegration. It is not clear what post-war Syria could look like, and any future political settlement scenario—involving however many actors—remains quite dismal and bleak. While much of the blame for the magnitude of destruction and the killing can be directed at the Assad regime, the Syrian armed rebellion—as much as the process of war—must take some of the blame for the fundamental social breakdown and decay of the Syrian state.

Burhan Nassir is pseudonym of a Syrian journalist and writer.