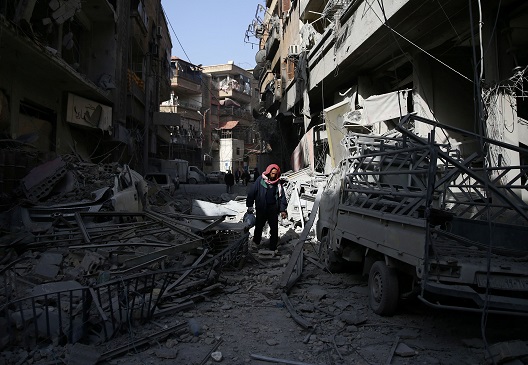 For the United States and its allies, the beginning of wisdom in Syria is to accept and act upon two points.

First: so long as civilians are targeted effortlessly by a terrorist regime, nothing good can result; not for Syrians, not for their neighbors, not for the West.

Second, the defeat of the Islamic State (ISIS, ISIL, Daesh) offers a one-time, perishable opportunity to produce a visible, functioning alternative to Bashar al-Assad: precisely the thing whose absence accounts for ongoing regime support by a significant minority of Syrians.

Part one of “Syria at Seven” addresses the geopolitical importance of pushing back against the slaughter of civilians in Syria. Part two will examine making something of lasting value from the defeat of ISIS.

The complexity of the Syrian conflict, as its seventh anniversary approaches, induces confusion, uncertainty, and paralysis in Western policy circles. As the Syrian regime employs mass homicide to survive politically, as Russia and Iran partake in regime war crimes while professing support for peace initiatives, as the United States uses a Kurdish-led militia to try to finish off ISIS in eastern Syria, and as Turkey attacks the very Kurds with whom Washington has allied itself, it is no wonder that Western policy (ISIS aside) boils down to the lowest of common denominators: the Assad regime should, as it slaughters people, refrain from using chemical weapons of deadly toxicity in the process.

So complex is this conflict, and so thoroughly has the country been undone by a large cast of characters (led by the regime), that many in the West want simply to look the other way. This witch’s brew of actors and interests paralyzes effective policy in the West. It does so by making objectives seem unattainable and strategy itself a paper-bound fantasy.

Russia and Iran suffer no such paralysis. Rather than admiring the problem, they have reduced matters to two goals: restore the Assad regime to the four corners of a ruined Syria; and then use demographic blackmail to force the West to pay for the country’s physical reconstruction. Given the abysmal track record in Syria since 2011 of a leaderless West, who can guarantee that they will not succeed?

And yet they must not succeed. Assad’s restoration would neither end Syria’s internal conflict nor promote national reconstruction.

Assad has overseen industrial scale murder, displacement, detention, torture, rape, starvation and pestilence. He and his entourage have set new, subterranean standards for incompetence and corruption. He has aided and abetted the rise of Islamist extremism in Syria and around the world.

Even if Western Europe submits to billions of euros in blackmail—hardly an impossible scenario given what passes for political leadership on the Continent—it will not erase a fundamental fact of political life: even Assad-controlled Syria could be quickly emptied of human life were Syrians simply given the requisite documentation to leave and re-settle elsewhere. With Assad left in charge—at least nominally—the emptying will proceed, with or without papers.

Just as Moscow and Tehran have cleared their minds by focusing on essentials, so must the West. Protecting civilians by ending a free ride for mass murder is the essential starting point. Without a measure of civilian protection, nothing worthwhile is achievable. It is the absolute sine qua non for anything good emerging from the Syrian crisis. One need not know the details of the road ahead to grasp that if this obstacle is left in place there is no road to travel and no destination worth reaching.

Yet when one speaks of protecting civilians from a rapacious Syrian regime, one inevitably encounters strong reservations about “humanitarian interventions,” as if obstructing and complicating the sanguinary work of Assad is but an optional, nice-to-do, but potentially perilous Boy Scout good deed.

Self-styled foreign policy “realists” are naturally adept at pouring cold water on the notion of civilian protection. As Samantha Power pointed out in “A Problem from Hell,” there is a long and dishonorable history of backs being turned and elaborate excuses for inaction offered in the face of genocide and the broader category of governmental mass murder. For many people, saving lives does not make the grade as a foreign policy priority; it does not rise to the level of “national interests.”

Perhaps “realists” could be more inclined to throw spanners into a mass murder machine if they were open to considering the geopolitical consequences of letting mass civilian homicide go unchallenged. The decision of Nobel Laureate Barack Obama to subordinate the protection of Syrian civilians to the pursuit of a nuclear agreement with one of the perpetrators was, after all, far from a cost-free exercise in prudence and restraint. Indeed, President Obama’s soulless cynicism was the rolling of dice.

The red line fiasco of 2013—a deliberate American decision to leave Syrians totally at the mercy of a murderous regime once a chemical weapons agreement was reached—surely helped to persuade Russia’s Vladimir Putin that the United States, like Western Europe, was a bag to be punched. Crimea was taken, NATO allies harassed, and the American electoral system attacked. As recently as February 7, 2018, Putin tried—expecting impunity but reaping disastrous results—to kill Americans by means of a Russian military assault across the Euphrates River in eastern Syria.

On March 4, 2018 the White House issued a statement about the ongoing regime and Russian massacre of Eastern Ghouta, saying in part, “The civilized world must not tolerate the Assad regime’s continued use of chemical weapons.”

So: barrel bombs, gravity bombs, artillery shells, mortar rounds and rockets—these are tolerable, even with civilians as the targets? And exactly how will the “civilized world”—presumably including the United States—“not tolerate” the use (for example) of weaponized chlorine, which is being used promiscuously? With words of outrage? Do American officials understand that enemies and adversaries listen and draw conclusions from what they hear? As the Obama administration demonstrated consistently, empty American words encourage adversaries to take risks in the expectation of American inaction.

The Trump administration seems to have adopted the Obama policy of operationally (if not rhetorically) averting its gaze from wholesale atrocities, provided those abominations do not involve sarin gas. As noted elsewhere, Russia, the regime and Iran interpret this stand as a green light to do as they wish to civilians provided murder weapons employed are either non-chemical or low-lethality chemicals.

How could our adversaries not take full advantage of this implicit permission slip? How could Russia not avoid testing the United States via a frontal military assault? The results of that test—many dead Russians—must not produce self-congratulatory complacency. Those determined to beat the United States in Syria for the edification of the world have asymmetric means at their disposal, including plenty of Iranian-led foreign fighters who are no more than cannon fodder for Tehran.

If the Assad regime were to blanket Eastern Ghouta or Idlib with sarin gas, there is no doubt that the Trump administration would, to its profound credit, uphold the credibility of the United States, as it did in April 2017 when American cruise missiles cratered a regime airbase and destroyed a large quantity of regime combat aircraft. No doubt plans are in place for a similar strike, if sarin is again used.

Why not warn Russia that civilian slaughter—regardless of the means employed—must stop now? Why not execute those plans if it does not stop? Some may fear that Russia and the regime could react by closing the airspace over eastern Syria, where American aircraft remain active in the suppression of ISIS. Yes, they might try such a thing: even if sarin were the trigger for military strikes. Is the United States powerless to counter such a move? Does the escalatory risk fall entirely on American shoulders? Is American military weight, for all practical purposes, the equivalent of Liechtenstein’s?

The United States has no interest in invading and occupying Syria. There is no American program of violent regime change.

But the Assad regime’s unopposed free ride for mass civilian slaughter has and will continue to have profoundly negative geopolitical consequences for the West, even beyond a humanitarian crisis that often beggars description.

Put to the side, the consequences for Syrian kids of the chemically qualified permission slip for the Assad regime to do its worst. What must the President of Russia and the Supreme Leader of Iran think about American resolve and seriousness when they are told, in effect, “Nothing is off limits for your client, unless he uses really bad chemical weapons?” Like its predecessor the Trump administration runs the risk of igniting global instability by broadcasting weakness in Syria.

It will not be possible to protect all Syrian civilians, in all places, at all times. But ending the free ride is step one toward a meaningful Syrian peace process. And it is the prerequisite for persuading Vladimir Putin and Ali Khamenei that Israel is not the only democracy willing to defend itself. Nothing good can come of Syria for the “civilized world” if Syrian civilians are left absolutely unprotected on the Assad regime’s bullseye.